The For-Rent Art Collection We Never Knew We Had

Inside a transformed warehouse in Collingwood, Artbank’s new premises is a community space, artists’ studio and vast public art collection, open to everyone. 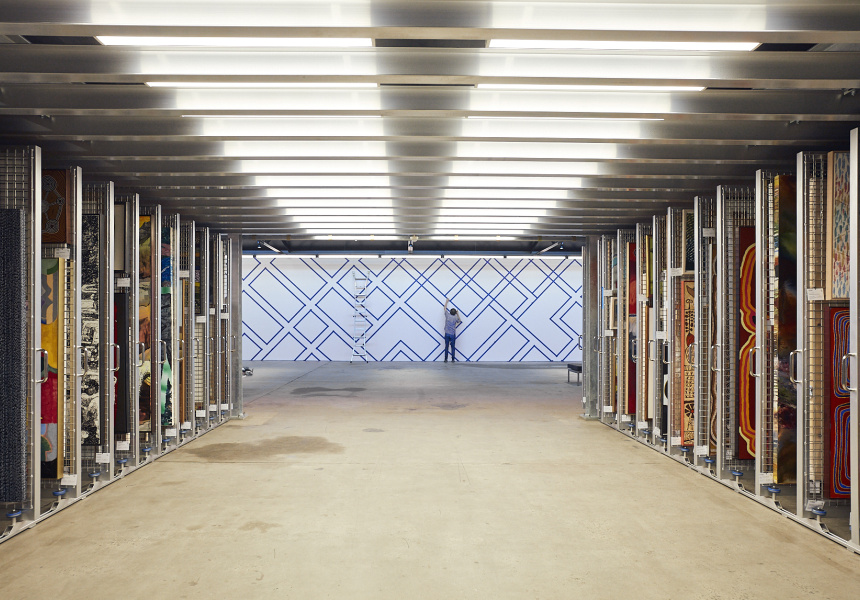 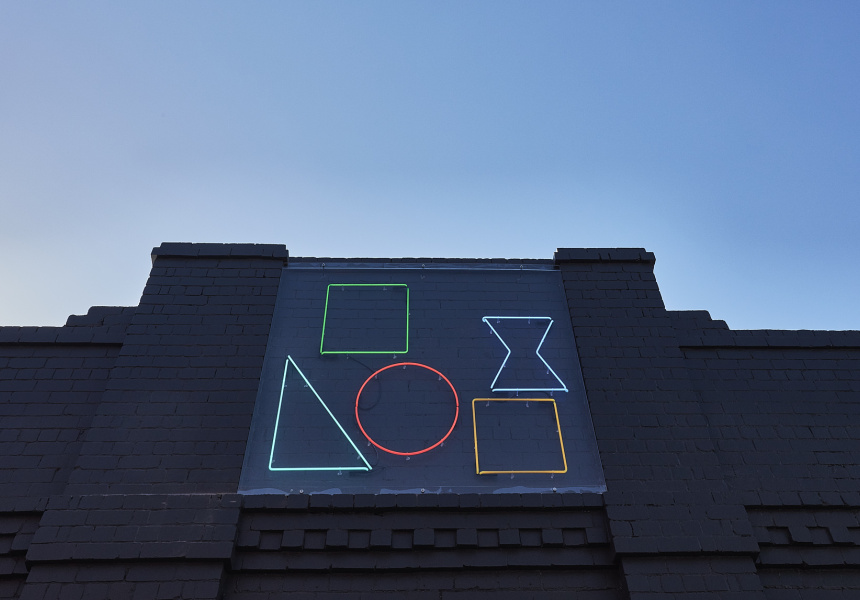 In a converted printing factory in Collingwood, just a couple of blocks from Smith Street, is one of the most significant collections of Australian art in the world.

Inside the building, a series of steel racks, filled with paintings and drawing and prints, occupies the middle of the vast, bright space. It's an impressive new home for a formidable collection acquired over 38 years.

When I visit in mid-March, I pull the racks out and browse. I own it, after all: the Artbank collection – some 11, 000 Australian artworks purchased since 1980 – is owned by the Federal Government.

There will be 2500 artworks here by the time they’re all moved from Artbank's old premises in Melbourne's southeast. Pieces by Juan Davila, Christian Thompson, Patricia Piccininni – a handful of some of Australia’s most acclaimed contemporary artists – have already made the journey.

Beyond the collection, there’s a large empty multipurpose space, to be used for a range of community-led events, including exhibitions of the works here, of course, but also performances, filming, yoga, judo, a community choir – whatever people want to do with it. And it’s free for anyone to book.

“We’re doing pretty well, so we’re making an effort to give back to the community,” says director Tony Stephens.

The collection pays for itself by leasing works – not just to galleries, but to any member of the public – starting at $165 a year for an unknown, emerging artist, and up to $5500 for a work by someone like John Olsen. You can hang a Sally Gabori on your wall for $2860 a year, including GST, delivery and install. Around 400 artworks come and go every month.

Of course, not everyone can afford that. Which is why the new premises are far more accessible and open than its predecessor, with an increased focus on giving the general public greater access to the collection and the site in which it's stored.

When I visit the space, they’re still setting up, preparing for an open day on Saturday March 24 when it will be filled with people – and music (by DJ Tanzer) – for the first time. There’ll be talks, a painting performance, giveaways. Beatbox Kitchen will be parked outside serving burgers. But most importantly, the display racks attached to the enormous steel frame at the heart of the building will be moving, with people wandering through a maze of art they didn’t know they owned.

“The NGV has two per cent of their collection on display at any one time,” Stephens says. “We have over 50 per cent of ours out with clients. The rest is in our Sydney or Melbourne storage facilities, and we get them out for the public when we can.”

The collection isn’t built on what’s valuable, or who’s in fashion. Stephens and his team buy from graduate shows as well as from established names.

“The artist might never go on to make another artwork,” he says. “It’s like an ethnographical study over time of what’s happening in Australian art, from 1980 to now.

“We’re charting changes in practice and style and ideas and medium. When this was set up the first director was big on sculpture, because he thought it was under-represented in Australian collections. Recently, it’s been media-based art.”

In areas the public can’t see, there’s more storage spaces – more art. There’s also a split-level artists’ studio with 24-hour access, waiting for its first tenants. This too is new for Artbank.

“Artists can do what they want here,” says Stephens. “We’re just facilitators.

“We’re going to put a call out and see how artists respond. What do they want and how long do they want it for? Some people might need space for a month, others 12 months. Then we’ll pay them a bursary. That’s pretty much unheard of in Australia.”

Artbank’s old Melbourne premises – a shopfront in Armadale in the city's southeast – never really made sense. It was about a third the size of the Collingwood hub, and the program flew under the radar for most Melburnians.

When it came to its new home, Artbank enlisted local architecture practice Edition Office – also responsible for the fit-out of the new Gertrude Contemporary in Preston – to deliver a multi-purpose space that would be dominated by the collection.

“The architects were bouncing off this structure,” Stephens explains. “We’ve got this amazing sculptural object right in the middle of the space that’s just full of art.

“We could have a gallery space and just do exhibitions, but that’s been done,” says Stephens. “We want it to be community-led. By building a sense of ownership over the space and the collection we’re narrowing the gap between audience and their art.”

Artbank is hosting an open day on Saturday March 24 from 11am until 4pm at 18-24 Down Street, Collingwood.