Produced by Broadsheet in partnership
with Nike.

Gallery: A Nike Run Down an LA Freeway 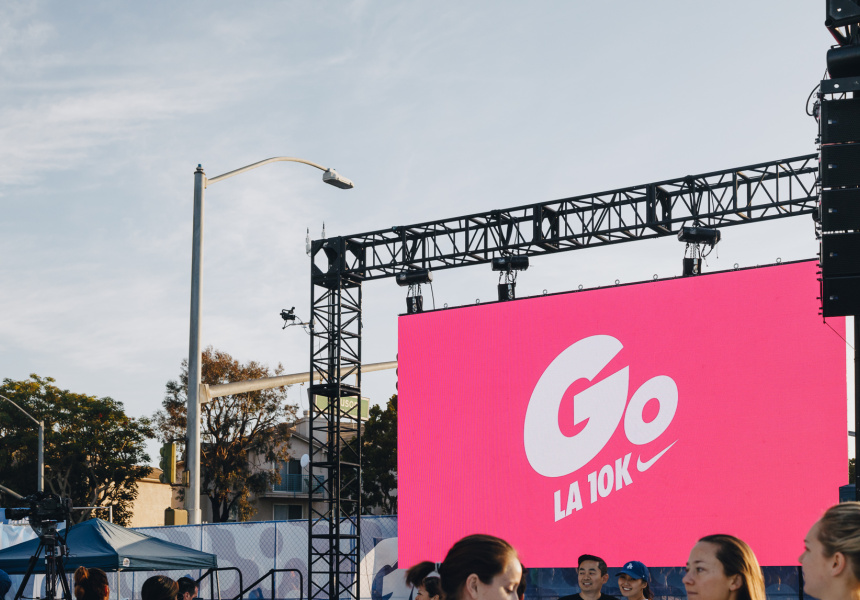 On a picture postcard sun-drenched morning in LA last weekend, thousands of runners gathered at Sepulveda Boulevard in Culver City to embark on a huge group run. With a flash of pink-coloured powder, Nike Go Day saw participants set off down a specially closed section of the CA-90 freeway, on a 10-kilometre run that took them up and over the busy city.

Among the many LA residents hitting the tarmac were Cass Dales and Callum Griffin, who were flown in specially for the event.

“You hear about these kind of things happening, but never to you," says Dales. "It was a once in a lifetime opportunity.”

The pair earned the opportunity to fly to LA and participate in the Nike Go LA 10k run at the Broadsheet Southside Run in early April.

Griffin says the Go LA 10k event was a great motivator. “The sheer amount of people there was unbelievable”, he says. “We were encouraged to do our best and really push ourselves, without making it competitive.”

Broadsheet photographer Jake Roden was there to capture all the action on the day.

This article produced by Broadsheet in partnership with the new Nike Epic React, #choosego and #nikereact.

Produced by Broadsheet in partnership
with Nike. Learn more about partner content on Broadsheet.

Online Exercise Classes You Can Do in Your Living Room

Online Exercise Classes You Can Do in Your Living Room