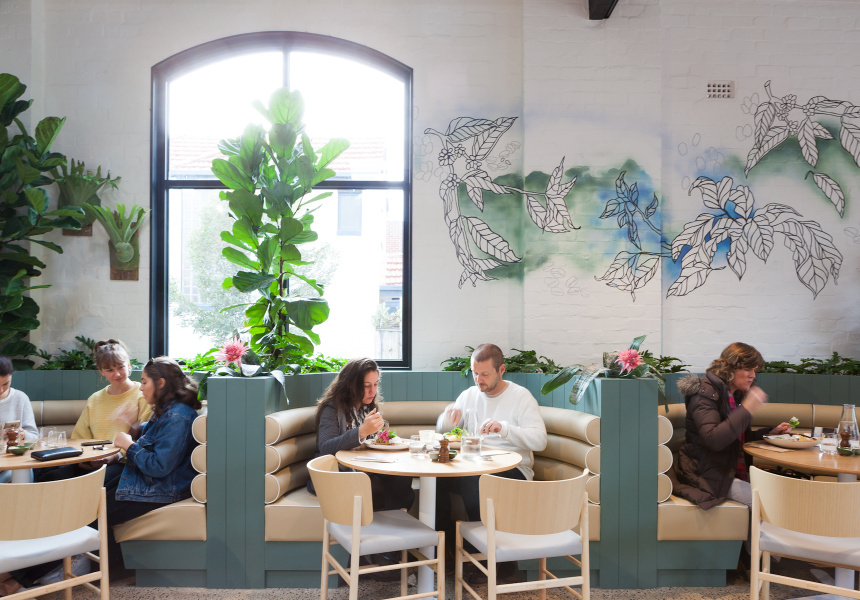 The name AU79 says something about the ambitious goals of the team behind the cafe. It’s the first original venture from The Coffee Culture Communication Group, which bought established cafes such as Loco Coffee, Sir Charles Liar Liar and Addict Food and Coffee.

Au and 79 are the chemical symbol and atomic number for gold, and when you arrive at the cafe on Nicholson Street, you’ll see its gold standard: the name spelled out on a shiny, metallic gold sign attached to the black brick building.

The old motor garage was transformed by Melbourne-based Mim Design, with stained cement floors and old tyres in what feels like a sprawling indoor botanical garden.

Interior windows reveal a bakery and patisserie; and a self-contained roastery turning out the house blend and single origins from around the world.

The menu is filled with classic dishes, with Asian-influenced flourishes. So alongside smashed avocado, waffles, and Breakfast Greens, there’s a confit duck bao burger with daikon kimchi and ssamjang mayo, and an Okonomiyaki pancake with eggplant katsu, yuzu mayo and sweet-potato crisps.