How to Spend a Weekend on the Sunshine Coast

A road trip to the Sunshine Coast can be much more than sand and surf. In partnership with James Squire, we seek out some of the best options in the area for fun and sustenance. 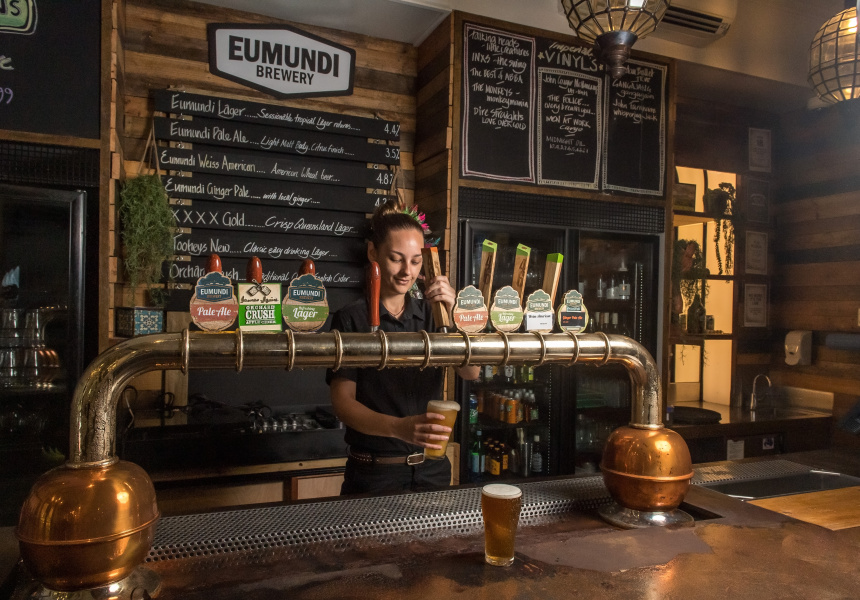 The Sunshine Coast north of Brisbane has all the elements of the quintessential Australian holiday: blue surf, pristine beaches and dense forests. Though the area has plenty of well-documented attractions, it’s worth veering off the beaten track to explore some of its less-known highlights.

We put together a guide to some of our favourite places in the area. Here’s where to go.

DRINK
Noosa might be one of the pre-eminent tourist attractions north of Brisbane, but the sleepy nearby town of Eumundi makes for a compelling, laidback alternative – especially when it comes to local brewing.

Half an hour from Noosa, the historic Imperial Hotel (which opened in 1911) hosts live music events and is also home to the Eumundi Brewery. Head brewer Chris Sheehan says the brewery was “ahead of its time” when it first began producing craft beers in the 1980s. Back then, says Sheehan, “lager or lager” were the main beer options in the area – suffice to say, a lot has changed since.

Take the hour-long brewery tour to see how their signature lagers, pale ales and ginger pale ales (a seasonal mix of ginger-infused froth) are made, then pop into the sun-drenched beer garden to enjoy some traditional pub fare.

DO
Across the road from the Imperial Hotel is the Eumundi Market. Launched in 1979, this local institution is open every Wednesday and Sunday. There are more than 600 stalls selling knick-knacks, clothing, artwork, locally made produce, soap, ointments, food, and more. It’s the kind of place that encourages a stroll.

No trip to the area is complete without a dip. If the tourist-heavy main beaches bore you, seek out some of the area’s smaller stars. One of the best is Little Cove, just a few hundred metres from Noosa’s bustling main beach. Park up on Pandanus Street and clamber down the stairs to a beautiful, small stretch of sand that feels like a secluded paradise. While the surf here is slightly smaller than at the main beach, there’s no shortage of waves or surfers gliding in off the point. Tip: get there early and find a shady spot under the leafy fronds growing out of the rocks. A spot on the sand can be hard to find, but it’s worth visiting to bob in the waves and look back at one of the most beautiful stretches of coastline in Australia.

EAT
Noosa’s Hastings Street might be the obvious go-to for dining on the Sunshine Coast, but tucked away south of the strip in Sunshine Beach lies a more recent gem. Sum Yung Guys is a buzzing, Asian-inspired restaurant perched above an unassuming strip of shops close to the beach. The brainchild of Masterchef runner-up Matt Sinclair and friends Dylan Campbell, Jeremiah Jones and Michael Rickard, the playful, neon-tinged space is the ideal setting to tuck into plates of Mooloolaba prawn toast, crying tiger short ribs, spicy chicken larb and barramundi green curry. The desserts, which reflect the tropical climate, include grapefruit sorbet, passionfruit curd gelato, and dark palm sugar pudding with ginger and vanilla bean gelato. Grab a window seat looking onto the street, or plant yourself in the leafy courtyard out back.

STAY
We could understand why travellers destined for the natural playground of the Sunshine Coast wouldn’t want to linger in Brisbane. But The Calile is a world unto itself worth exploring.

The pastel-accented hotel on the corner of James and Doggett Streets feels more like an art-deco resort hidden above the city than traditional stopover accommodation – think “Wes Anderson comes to Miami”. The open-air hallway nooks, arched walls, and 30 metre pool lined by palm trees and cabanas make the hotel feel like your tropical, chic new pad – as is the Lobby Bar downstairs, which serves fresh, unfussy food worth wandering in off the street for. It’s hard to leave. Spend a Weekend Staring at the Stars, Not Your Phone, at These Two New Tiny Homes