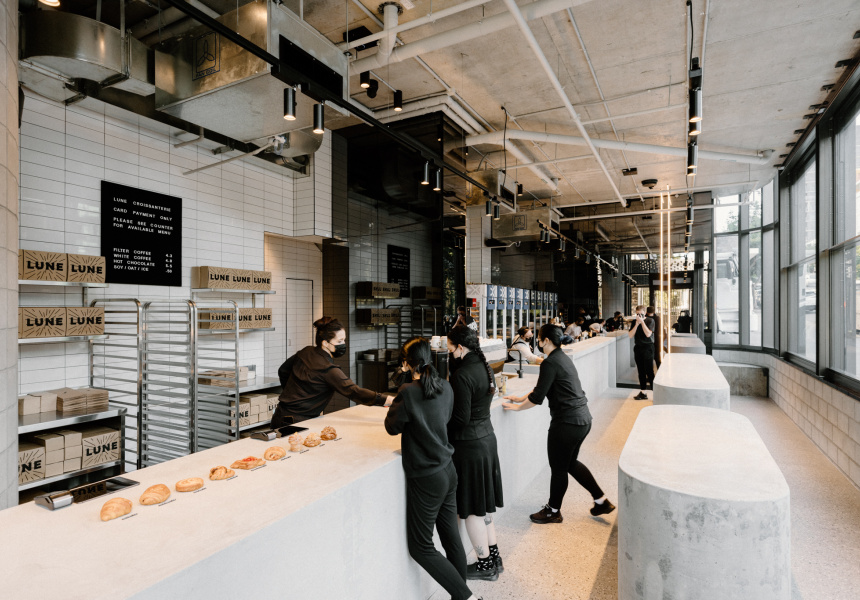 If you know Melbourne’s food scene, you know Lune. Originally opening in a tiny Elwood hole-in-the-wall in 2012, co-owner Kate Reid called upon her background working as a Formula 1 aerodynamicist and a stint in Paris studying the meticulous art of raw pastry-making to produce buttery, flakey croissants served fresh from the oven.

Lune’s long-awaited Brisbane outpost bears a striking resemblance to the croissanterie’s stunning Melbourne sequel, housed inside an expansive converted warehouse in the backstreets of Fitzroy. All concrete, tiles, glass and high ceilings. This iteration spreads out across two immaculate Hogg & Lamb-designed spaces beneath The Standard – a gleaming 30-storey residential tower on Manning Street opposite the entrance to Fish Lane.

On the street is the retail shop, where a line of convection ovens punches out croissants (some twice-baked), pain au chocolat, kouign-amann, morning buns, Danishes and cruffins. Savoury options include Lune’s classic ham and gruyere croissant. Coffee is by Coffee Supreme.

Out back, down The Standard’s entranceway, is the Cube. It’s an enormous glass box temperature controlled to 18 degrees Celsius, adorned with a signature splay of LED lights across the ceiling. Here, the Lune team prepares its pastry over three days using local flour, eggs, milk, and local and imported French butter – the most important of which is a preservative-free Beurre D’isigny butter from coastal France used for the laminating process.

For the full Melbourne experience, join seven other diners at the concrete high counter for the Lune Lab. It’s three courses of pastries with bottomless coffee, including two experimental pastries that aren’t on the regular menu. While there, you can watch the pastry chefs at work inside the Cube. If you’re lucky, you may even get a chance to chat to them about the process.