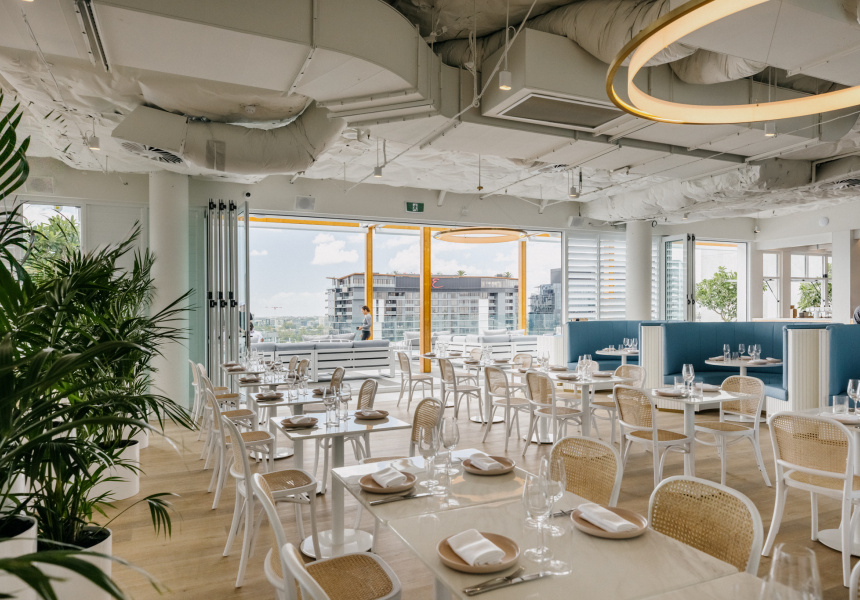 Lina is a rooftop bar and restaurant perched on top of the Mobo building in South Brisbane, intended to capture the spirit of beach and day clubs in places such as Ko Samui, St Tropez, Mykonos, Dubai and Las Vegas.

Above all, it’s a venue designed to wow: there’s standing room for 480 punters, a 30-metre infinity pool, and expansive views of the CBD and the river.

The treatment here is white, light and bright in order to capture the feel of the Mediterranean coast. The pool area’s eight cabanas can be hired for a $200 day-stay rate for two people – the price including towels, lockers and access to showers – with sun beds going for $100 per person. You can have food and drinks delivered to both.

The food offering revolves around sliders, skewers, salads, and a raw bar that punches out oysters, steak tartare and salmon gravlax. The raw bar can also be ordered in the 128-seat restaurant, backed by a seafood-driven menu of larger dishes.

There are eight beers and four spritzes on tap, a lengthy signature cocktail selection, and a big range of agave spirits. Lina works in partnership with Chateau D’Esclans Whispering Angel rosé, and serves its wine in formats ranging up to three-litre double magnums alongside other rosés from France and Australia. There’s also a varied selection of champagne and sparkling wine.

Elsewhere, Lina features app-controlled lockers, automatic doors throughout, automatic boom gates (for booked guests arriving by car), showers, and hair straighteners and driers in the female bathrooms. There’s even a shop, if you’re that person who always forgets their bathers.