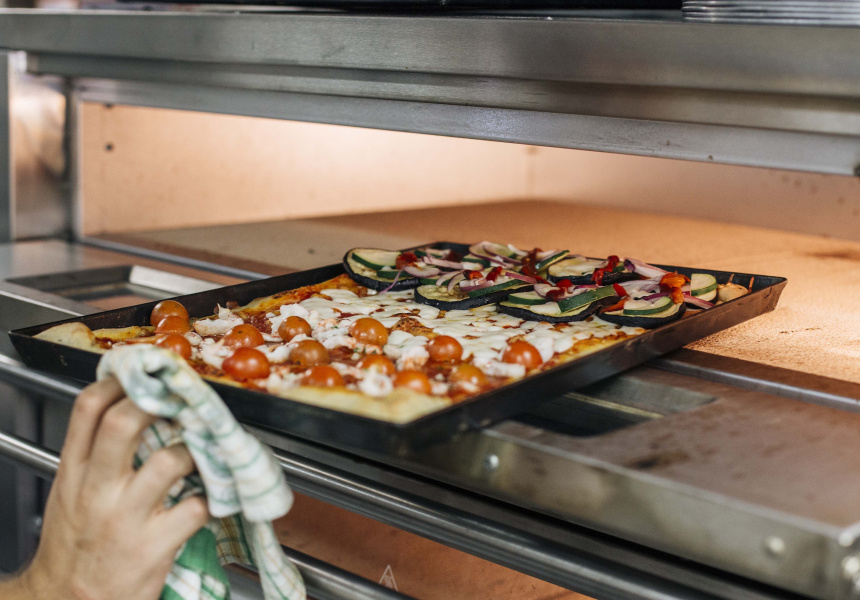 Prego serves a style of pizza that is particularly Roman. Chef Stefano Bagnoli has been making pizza since he was 20 years old and he grew up there.

Pizza in teglia (“pizza in tray”) means an easier-to-make, serve and eat pizza. Bagnoli also reckons it’s the best way to have it, so he teamed up with co-owner Simon Barakat (Il Verde, The Defiant Duck) to open Prego Pizzeria on Racecourse Road in Ascot.

The eatery itself is tiny. There are a couple of tables in the subway-tiled indoor space, but most punters will likely find themselves outside on the astroturfed front porch. Otherwise, there’s plenty of wood and an eye-catching neon sign that reads, “You Wanna Pizza Me?”

The slices themselves are generous, about 300 grams, and designed to be affordable. The menu is divided into tomato-based Pizze Rosse and tomato-free Pizze Bianche, with all bases made on-site. Toppings feature porcini mushrooms, various cheeses and cured meats made in Australia, and an Italian fennel sausage mixed in-house. There’s also a clutch of antipasto options and salads that toss together Australian and Italian ingredients.

There’s a range of wines and beers available by the bottle. And there are three tap beers including Menabrea from Northern Italy and a local pick.