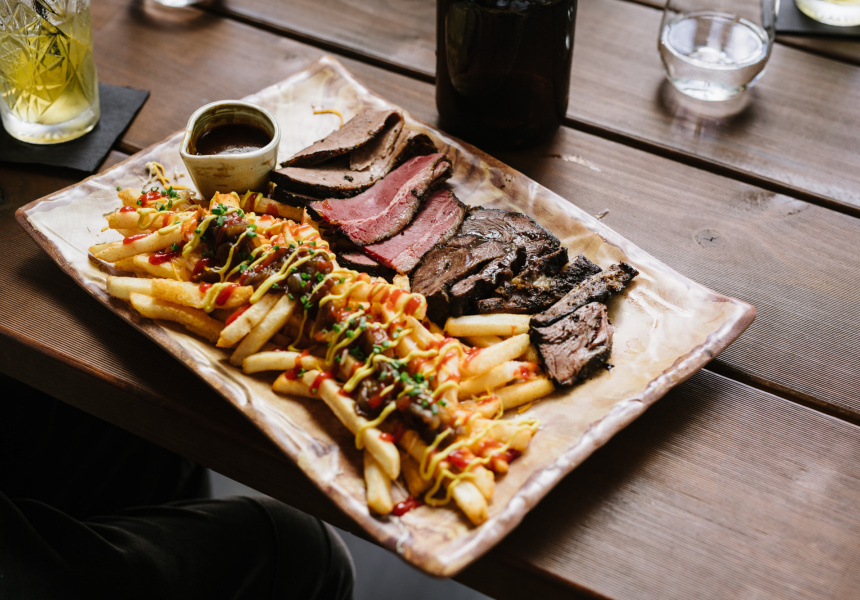 In June 2020, this East Brisbane favourite was reborn as a 110-seat restaurant overlooking Newstead’s Gasworks Plaza. In terms of fit-out, it’s relatively straightforward – a high-ceiling space decked out in bricks, tiles, timber and enormous bi-fold windows. Much of the seating is al fresco, creating a very different experience from the poky (and enormously popular) original premises.

The centrepiece of the restaurant is a long, low bench where co-owner Shalom Bitton and his chefs carve away at freshly cooked brisket, pastrami, ribs and beef cheeks. Behind them, a $20,000 imported smoker runs on black wattle, macadamia and pecan woods.

The Israeli-born Shalom has a background in French cooking, meaning this is a very precise take on barbeque. Temperatures and timings are carefully controlled, there are no injections, and he uses reductions and jus rather than sweeter American-style sauces.

Brisket, pastrami, ribs and beef cheeks can be ordered by weight or as part of a platter that comes with sides such as potato-skin chips, coleslaw, cob salad and creamed corn. The meats can also be ordered in sandwiches that come packed with 200 grams of meat, and there’s The Dirty Dozen, which puts all four meats together on a platter with fries; caramelised onion; three cheeses; and two sauces. For dessert, there’s New York-style baked cheesecake, cherry-ripe slice, three-layer chocolate mousse, and a trio of sorbets.

For booze, there’s cocktails; a short list of beers; and a neat collection of wines both local and international.