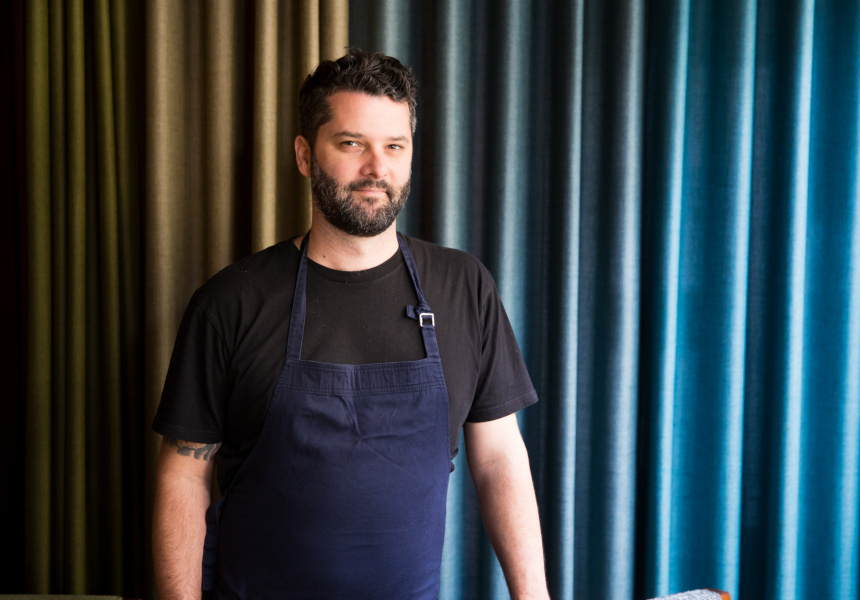 For Ben Williamson, 22 Agnes is about coming full circle.

In part due to the award-winning chef’s time working for Gulf Air in Bahrain – he recalls visiting family restaurants in Manama, eating sumac and garlic-crusted lamb cutlets “cooked aggressively” over charcoal – but even more so because it harks back to childhood school holidays spent in the backyard, preparing food on his father’s woodfire barbeque.

“Dad had a brick barbeque he built himself and it was woodfired,” he says. “Winter holidays in Perth, cooking sausages over the fire … Cooking like that is two things: it calls to our DNA, something that’s ingrained in eating around a fire. It’s social.

“The other thing … with wood, there’s no control. You can’t turn up the gas. It takes time to regulate and manage the heat. It forces you into that intuitive cooking. It makes you a better cook.”

22 Agnes is Williamson’s new Fortitude Valley restaurant and his first as a co-owner. With your own venue comes your own vision, and Williamson has dreamt up a menu that is completely woodfired, with everything cooked using flames and smoke.

It’s also the logical endgame to a process he started at Gerard’s Bistro, where over six and a half years as executive chef Williamson slowly rearranged the kitchen equipment, cutting back on the gas burners and subbing out a modern chargrill for a custom-made charcoal pit. His partners in the new restaurant are Tyron Simon and Frank Li, owners of the immensely popular Longtime and Honto, two restaurants that like Gerard’s have a heavy focus on the communal aspect of eating.

“Gerard’s was very much a social experience and that’s why we had share food,” Williamson says. “We wanted it to be something where it’s a talking point. Longtime’s the same, Honto’s the same. Ty’s venues are all like that. That’s what drew me to him.”

That’s Williamson’s story, but 22 Agnes is also a moment of coming full circle for the venue itself. He laughs when he says the old hillside brick warehouse used to be a bacon smokehouse. Inside, there’s evidence of its past in some ancient-looking hanging rails. Otherwise, the space is empty but for the random detritus that accumulates from a series of short-term tenants – sawdust-filled drums, a broken chair, a framed lenticular picture of Jesus Christ.

Looking around right now it’s hard to describe what the final restaurant will look like, Williamson says, but he gives it a go anyway.

22 Agnes will have 86 seats split between a main floor and a private dining mezzanine. On a lower level a bar is planned with 38 seats and a small distillery producing gin and whisky. The main floor will have an industrial homeliness to it, he says, with an open kitchen built on low, deep benches: “It’s all concrete render and brick and granite. The walls are tiled. There’s no stainless [steel].”

Likewise upstairs in a private dining area, which Simon is hoping to fit out with old leather couches, a couple of vintage turntables and a record collection. Downstairs, the bar will be low-set, much like the kitchen, with no separate workspaces. “It’s one big bench,” Williamson says. “It’s like you’re going somewhere to be entertained … we want it to be this really personal thing.”

Ask about the food and Williamson says it’s too early to talk specifics. What he will talk about, though, is the wood.

“We’ve got all the nut woods from macadamia to hazelnut and walnut. There’s olive wood, cherry, peach and plum,” he says. “They’re incredible. We’re fucking around with them at home and the peach actually smells like peaches, the raw wood. It’s incredible and has that sweet and sourness that peaches have. The same with the cherry.

“Ironbark will be the main wood we work with,” he continues. "The smoke flavour isn’t pronounced but it burns hot and clean so is very economical. That’s what we’ll use as our base.”

Otherwise, expect an evolution of what Williamson was celebrated for at Gerard’s, but without the Middle Eastern structure, and a simplified presentation. There will also be a big focus on zero waste, with a dry-ageing cool room installed downstairs so the kitchen can buy whole carcasses and use as much of each beast as it can.

“The time is right [for 22 Agnes],” Williamson says. “I knew I needed to leave Gerard’s so it wasn’t difficult in the end to go.

“All the awards and accolades, it reached a point where I’d hit all the targets … It was like, where do we go from here? It took me a while to reflect on it and realise I needed to grow further.

“But it always had to be my own thing. It had to be that or nothing.”

22 Agnes will open in August.