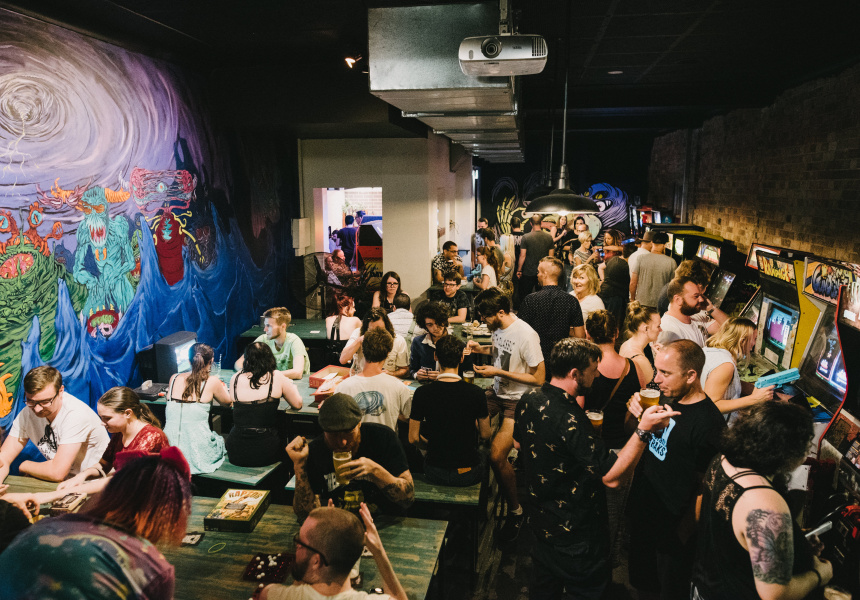 James Angliss loves playing competitive pinball and drinking beer – simultaneously. In January 2017, along with Ben Nichols and Kieran Ryan from The Scratch, he opened Netherworld, a venue dedicated to just that.

The large site, formerly the Step Inn, is based on the popular arcade bar scene in the USA. It's split into three sections: the heritage-listed public bar at the front featuring retro green tiling and a long, curved bar bench. Out the back, arcade machines are lined up against an exposed brick wall. Through another doorway is Hellmouth’s Diner, fitted out with street art, barbeque benches and fairy lights.

In total, there are 25 arcade machines, 15 pinball machines, five classic consoles and more than 100 board games. Most came from friends of Angliss’, who he had met through the competitive pinball scene.

Bryn Griffiths (ex-Sixes and Sevens heads up the kitchen in Hellmouth’s Diner, creating an entirely vegan menu that fuses classic American diner-style food with Japanese influences. The biggest hit so far is the Kappa Katsu Burger: panko-crumbed eggplant with avocado, nori, pickled ginger, wasabi kewpie mayo, lettuce and tomato. For non-vegans, there are dairy and protein add-ons to most dishes on the menu, such as swapping the eggplant for katsu chicken.

There’s a strong focus on beer with 14 taps on offer, including the Kobold pale ale, in collaboration with Green Beacon Brewery; and the Abomination, developed with Modus Operandi Brewing Co. A selection of wines, ciders and cocktails are also available as well as house-made alcoholic and non-alcoholic sodas.