The Votan brothers are set to shake up their immensely popular Chinese restaurant. It’s risky to walk into Spring Hill’s Happy Boy without a reservation, no matter the night of the week. Such is the popularity of some of the city’s best provincial-inspired Chinese food matched to carefully selected boutique wines.

“We get Monday nights where we have to turn away people, which is mental, and we hate it because it feels so bad that someone has made the effort to come all the way to Spring Hill,” says Cameron Votan, who co-owns Happy Boy with his brother, Jordan. “We want to say, ‘Come in. We have tables for you no matter what’.”

It’s one of the driving forces behind a second, much-larger Happy Boy, set to open around the turn of the month on Fortitude Valley’s East Street in the space previously occupied by Aunty Oh’s.

The new space will echo the minimalistic style of the Spring Hill venue and Greenglass, the hidden city wine bar that the Votan brothers co-own with Nick Turner and Michael Larsen. The spacious interior will feature plenty of concrete, high ceilings, white painted walls, wooden tables and chairs, and large bi-fold doors. But it’s the alfresco space that excites Cameron the most: three enormous jacarandas hang over the deck, the trees illuminated at night with fairy lights.

The whole Spring Hill kitchen team will move across to the new venue and cook from a larger menu. It will include more “snacking” options, as well as dishes that can’t be cooked in the current kitchen due to limited space and a lack of proper equipment. Still, Happy Boy regulars can rest assured that the classics, such as the fish-fragrant eggplant and red braised pork belly, will remain.

“What I mean by ‘snacking’ is those great little things that naturally sit well when you are eating and drinking,” says Cameron. “That’s exciting because it is my favourite style of eating.”

The drinks menu will extend to include more boutique wines by the glass, most of which will also be available through Spokenwine, the online wine business Cameron co-owns with Turner, Larsen and Victor Garcia. There will also be a larger selection of tap beers and cocktails, made possible by a bigger bar space on a mezzanine level.

Once things have settled down at the new site, the Votans will be looking to change the name and cuisine of Happy Boy Spring Hill while aiming to keep the bustling, jovial vibe that the space is well-known for. Cameron won't be drawn on the kind of food he and Jordan are aiming for but says the inspiration will likely come out of how Chinese food has influenced other Southeast Asian cuisines.

Happy Boy will open at 1 East Street, Fortitude Valley in late April/early May. 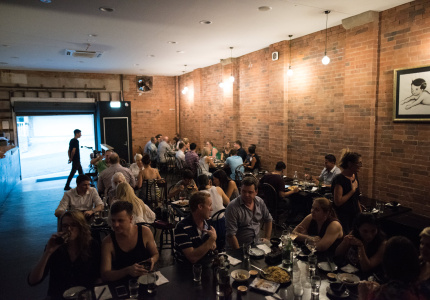