Finally, a permanent home for some of the city’s best vegan tacos, with slick wines, cocktails and Mexican beer to match. 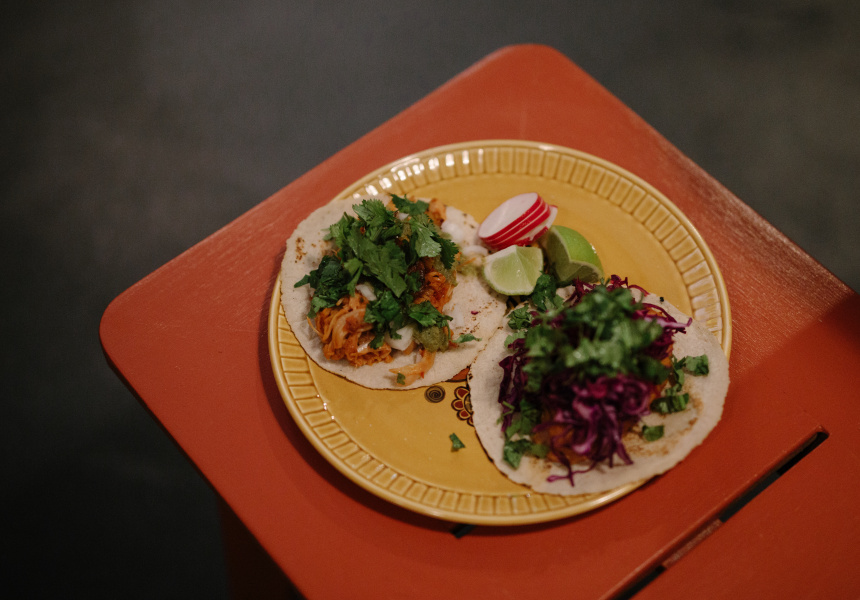 On a Friday evening in mid-June, two things happened to Adrienne Jory. First, she and partner Rick Gibson threw a grand-opening party for El Planta, their new plant-based taco restaurant. The second was a Facebook reminder of her and Gibson’s first date – 10 years ago to that day – at the old Tuckeria at Central Brunswick in Fortitude Valley.

“It was stupidly random,” Gibson says. “I guess we’ve both always loved tacos.”

But Jory and Gibson are also both vegetarian. And they’ve always struggled to find good plant-based tacos in and around Brisbane.

The decade since that first date has been full of all sorts of adventures – an extended period living (and, for Jory, food-blogging) in Thailand, a stint working in e-commerce back in Australia, and a wholesale salad company called The Whole Box. Most significant, though, was the decision to open a pop-up at popular Fish Lane food hub Wandering Cooks.

“We were offered a space for The Whole Box,” Gibson says. “We thought, ‘That’s not going to work.’ So we thought, ‘Let’s do plant-based tacos.’ It combines our two loves and it’s a lot more approachable.”

They named their pop-up El Planta. Almost immediately it was a roaring success – Gibson and Jory recently worked out that in its 12 months at Wandering Cooks El Planta shifted more than 25,000 tacos.

“Which was crazy,” Gibson says. “From a little pop-up, we ended up doing six nights a week. From there it was about building a following, a brand and something we could take with us. The goal was to have our own place in 12 months.”

That goal became a reality in late June when El Planta officially opened as a restaurant on Hope Street in South Brisbane, little more than a stone’s throw away from Wandering Cooks. It’s taken longer than the planned 12 months, the Covid-19 pandemic dictating a switch to takeaway and a small sidewalk dining operation when punters were first allowed to return to restaurants, but that gave Jory and Gibson extra time to enlist the help of family to produce an unfussy, homely space in a small tenancy previously occupied by Ol’ School. The walls are covered in photos and framed prints, while the venue’s floor-to-ceiling glass window has been lined with a neat cactus garden. Inside, the space is dominated by a single large communal table. Outside, there’s a scattering of tables and a church pew.

“We wanted it to feel like you were coming over to our place for dinner,” Gibson says. “That’s why we built the table. All the best food is designed to be shared. That’s the spirit of El Planta: everyone sitting together and coming together, even though it’s a bit harder during Covid-19.”

Out back, Jory is preparing a simple menu of tacos and smaller snacks. In terms of Mexican-inspired food, think fresh, flavourful and colourful rather than over-the-top Tex-Mex.

For tacos, variations include roasted and flame-grilled cauliflower with toasted cashews and cascabel salsa; blistered eggplant with cashew crema, salsa macha and toasted peanuts; and jackfruit with adobo sauce, grilled pineapple and salsa verde. For now there’s just one main meal – a rich chilli stew of mushroom stem and potatoes – while snacks include house-made guac and corn chips, grilled corn with a chipotle vegan mayonnaise, and house-pickled jalapeños and vegetables.

Drinks are Mexican beers, a slick selection of wines put together by Happy Boy’s Nick Turner, and a bunch of Latin American-inspired cocktails such as Margaritas, Diablo Verdes and Palomas that are being prepared with house-made mixers.

“Our aim was always to get people to eat more plants,” Gibson says. “We figured out if we can make plants really damn tasty, people might be able to eat better meat [in their everyday lives] because they’re eating less of it … Tacos are super approachable, no one’s offended by tacos. If someone’s not vegan they’ll still eat vegan tacos.”

This story was originally published on June 29. Menu items may have changed.