The Brisbane coffee scene gets a terrific new player. You just have to find it first. 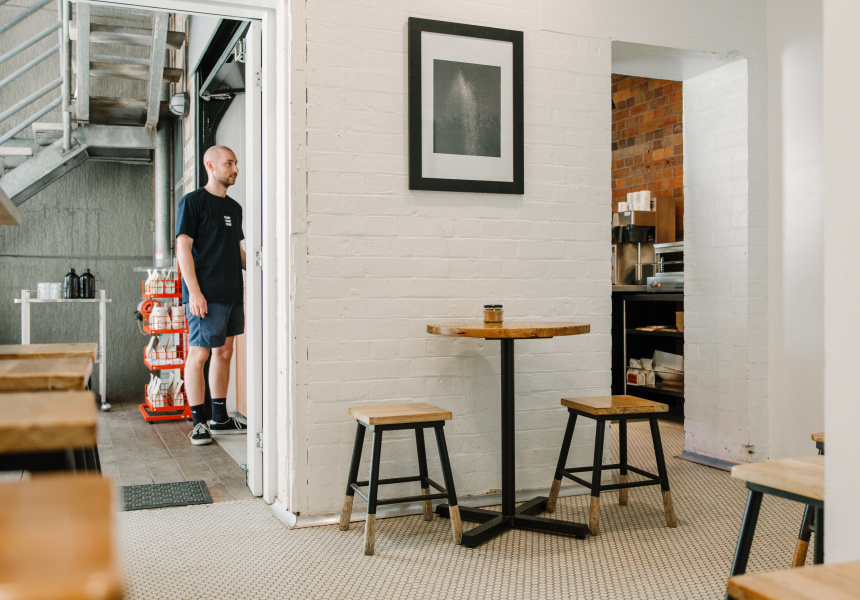 Tom Cooney believes there aren’t enough cafes in Brisbane’s CBD that are both high-quality and fun. That’s the goal for Anytime, which he co-owns with Jack Wakefield and soccer player Scott Neville. It opened earlier this week.

“High-quality [coffee] doesn’t need to be boring,” Cooney says. “Anytime is about being super hospitable with really great coffee, cold drinks and food. You can come here, have a great time and then get back into the hustle of the city.”

Finding Anytime is where the fun begins – there are two ways to get there. You can walk down a Mary Street laneway or enter through the back of men’s clothing store Urbbana, which fronts onto Edward Street. Whichever way you arrive, you’ll notice the venue is small – very small – with a tiny deck and a cosy white-walled room. With limited seats, the main idea is for people to takeaway.

Coffee-wise, you’re in very good hands. In recent years Cooney has helped spearhead the opening of Day Made in Woolloongabba, and then its subsequent transformation into Coffee Supreme Gibbon Street, creating a Brisbane flagship for the New Zealand roaster (he’s still the Queensland wholesale manager). Wakefield managed the venue, and before that opened BVLD in North Lakes (before selling it around two years ago).

The shift from cruisy suburban cafes to fast-paced city life is a big change for the pair. “[In the city] it’s loud and fun, versus [the] suburban sit-down [crowd],” Wakefield says. “The turnover is more exciting.”

Given their history, it’s not surprising to find Coffee Supreme’s Five Star Day as the house blend. They’ll also rotate through single origins for espresso, beginning with Northgate’s Passport Specialty Coffee. Batch brew is also a focus, with the duo investing in a Fetco coffee brewer.

A small, straightforward menu has been designed to minimise waiting time. Cooney says it shouldn’t take more than five minutes to receive your food. Most items come from Salisbury’s Sprout Artisan Bakery, including cinnamon rolls and a croissant loaf. The latter is sliced in-house and loaded with different toppings that will change seasonally, such as ham and cheese, mushroom and Gruyere, and mascarpone and peach compote.

When Broadsheet visits, construction of major new development Midtown Centre is going on next door. It’s noisy, but Cooney isn’t concerned. “If you look at the construction next door and think that’s a negative for the business, you’re only thinking in a nine-month window,” Cooney says. “We’re looking at this being a long-term place and becoming an institution.”