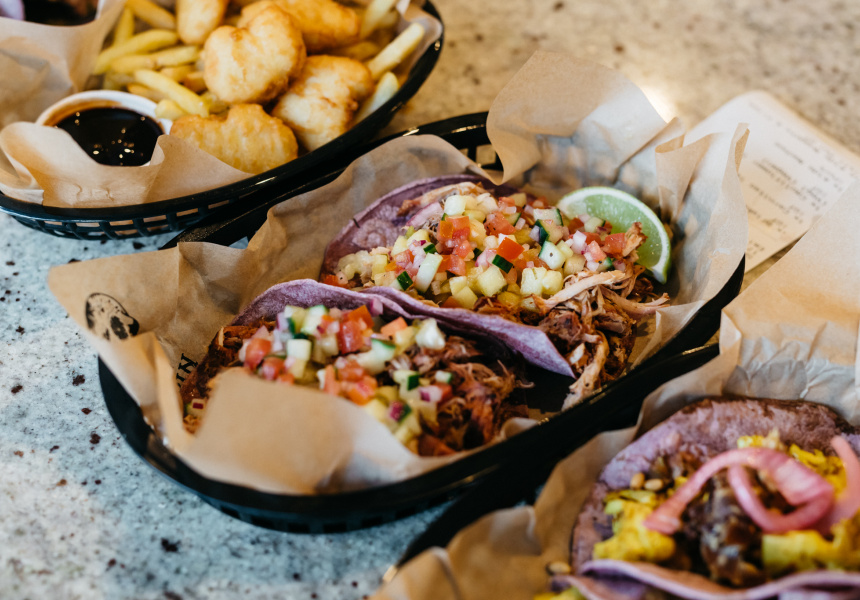 “We stumbled across Tex-Mex and fell in love with the smoked meats, hand-made tortillas and fresh salsas,” Dosser says. “That’s where [the idea for South Austin came] from.”

In the time between that trip and the launch of their new Tex-Mex cantina, the team opened their first permanent low‘n’slow barbeque restaurant, Barbecue Mafia Smoked Meat Co, in Chelmer (following numerous pop-ups around town). Late last year, Cenzo’s Cafe + Bar owner Vince Dickson asked the team if they wanted to take over his venue at night (Barbecue Mafia had operated pop-ups there in the past). The team thought the space was perfect for their South Austin concept; it opened inside Cenzo's in late January.

Due to the small kitchen, all the meat is smoked at Chelmer on Barbecue Mafia’s two massive custom built Radar Hill smokers (named The Don and The Bone Collector) and brought across to Cenzo’s daily. The tortillas are also hand-made in the Chelmer kitchen by Walliker. Marstella is South Austin’s head chef and has developed a range of salsas, including a blackened, roasted tomato salsa, a tomatillo salsa and a pickled pineapple salsa.

Marstella’s menu is straightforward and approachable. There are six taco options (two per serve), including one with that award-winning brisket, guacamole, tomatillo salsa, pico de gallo and red onion pickle; another with smoked pork shoulder, caramelised onion, pineapple salsa and pico de gallo; and a vegetarian taco with roasted spiced cauliflower, dates, pine nuts and pineapple and roasted tomato salsas.

The only dish that isn’t Tex-Mex is the birria taco, which is filled with a smoky beef shin and heel stew, cheese, onion, chilli and coriander. It’s served with a cup of meat broth for dipping. Dosser says it’s been the most popular item on the menu.

“We've done birria taco nights in the past and they went absolutely bananas,” Dosser says. “[While] it's not authentic Tex-Mex, we still wanted it on the menu. People have been saying it's the best birria they've had outside Mexico.”

The cafe’s casual fit-out suits the menu. It’s the sort of place where you can rock up in shorts and flip-flops, order a drink and go a couple of rounds of tacos. There’s a number of seats inside, but try to nab a spot outside on the footpath while the sun goes down.