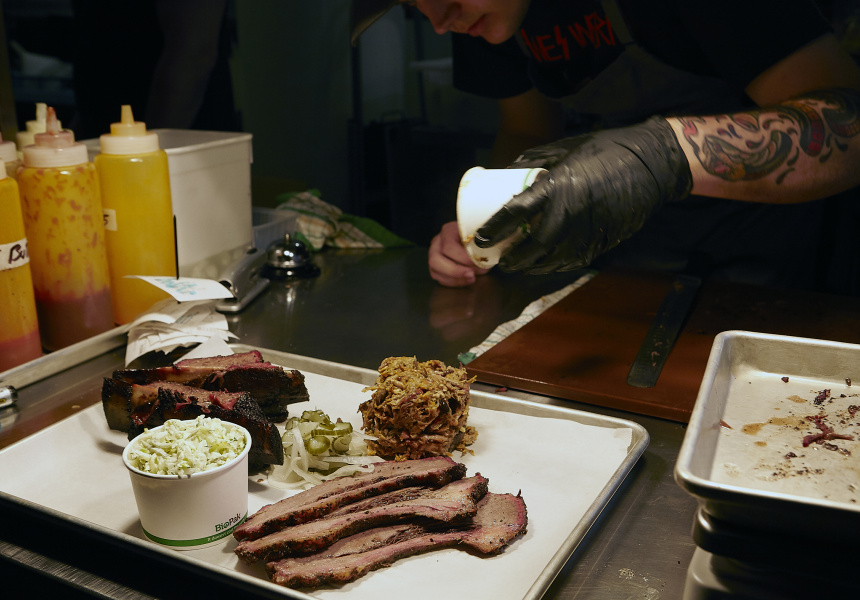 Coorparoo Square has almost singlehandedly reoriented its own eponymous suburb. Opening late last year, it brought with it a batch of new eateries and bars – Beyond the Pale, Barbacoa, Junk and Mission Vietnamese among them.

The development’s latest addition has been two years in the making. Special Rub finally opened in early April after a bunch of costly setbacks, including a complete rebuild of the kitchen that in turn forced a redesign of the floor of the restaurant.

Food is Texas-style barbeque. It’s a departure from the Asian-driven menus Popmega generally deals in, but one co-owner Dane Huitfeldt has wanted to chase for a long time.

“It’s mostly a passion project,” Huitfeldt says. “I’ve been a home barbeque lover for the last ten years … it was a huge learning curve from doing good barbeque to doing barbeque on demand. Getting it to happen over a long period of time and maintain the quality is even harder.”

Key to Special Rub’s approach is a dedication to wood smoke. The venue is using ironbark, which according to Huitfeldt is similar to the oak often used Stateside. It gives the meat a relatively light flavour.

“A lot of places don’t necessarily smoke in straight wood smokers,” Huitfeldt says. “They’ll either do it sous vide or in ovens and add a lot of the smoky flavour through sauces.”

Ordering is simple. You choose your meat – organic, grass-fed beef brisket, beef short ribs or Kingaroy pulled pork – and then your sides and house-made sauces. There are also burgers and southern fried chicken, or you can head in early for a relatively straightforward breakfast menu with burgers, cook-ups and hotcakes.

Drinks are straightforward, too, with eight rotating craft beers, a clutch of small-producer Australian wines and a wall of American whiskey.