In the former Welcome to Bowen Hills space you’ll find live music, cocktails (including non-alcoholic options) and lots of local visual art. Plus, a menu of Korean- and Japanese-inspired dishes such as octopus karaage, bibimbap, soft-shell-crab baos and katsu sandos. Musician Hannah Sands fondly remembers travelling around Europe and coming across all sorts of music in the strangest of places.

“In Berlin, you could be at the market and there's hectic deep-house music playing while you're buying vegetables,” she says. “Their appreciation for music during the day is so awesome. In Australia, we so heavily attach it to drinking and clubbing.”

Back in Brisbane, Sands found there was a lack of live music venues where you can enjoy music without feeling like you have to consume alcohol or stay out late. That’s partly what inspired her to open Space & Co, an artist-run initiative highlighting live music and local visual art, which opened in Bowen Hills on Wednesday.

“I don't want to have to go to the valley at midnight to listen to jazz,” Sands says. “We'll have Thursday jazz jams in the afternoon and you can sit out in the sun with your dog and have a coffee.”

Sands is cautious about competing with surrounding live music venues like The Triffid and The Tivoli. What Space & Co offers is something entirely different. It’s a very relaxed, welcoming environment with the musicians playing in a NPR Music Tiny Desk-inspired gig room. Framed photos on the wall and mismatched vintage seating make it feel less like a stage and more like you’re listening to someone perform in their living room.

The site was previously home to Welcome to Bowen Hills, which 100 Burgers Group opened in 2018 and quietly closed earlier this year before transforming the venue into Space & Co. Sands, who has been working with the group for a few years, has taken on the role of manager, while fellow musician Hope Defteros (aka Hope D) is in charge of artist bookings.

“Hope and I connected over our hilarious experiences of playing gigs and starting out as musicians,” Sands says. “You have some horrible experiences and this will not be one of those places ... People can come play here and they don't need to be scared about sound, or nervous about asking for what they need.”

The bones of the former space are still intact, but it has been stripped back and received a fresh lick of paint. Former gin bar Swill has been turned into a functions space. There are now murals by local artists MCRT Studio and Brigid Holt that capture the collaborative, community-minded ethos of the Space & Co concept. The outdoor laneway area with lots of greenery remains, and some of the booth seating inside has been removed to make room for an exhibition wall. Works from different artists will be displayed and rotated every few months (Melbourne-based artist Kayla Coombs is first up).

For food, Teneriffe favourite Zero Fox is dishing up Korean and Japanese street food. You might start with some octopus karaage, okonomiyaki and soft-shell-crab baos, before moving on to bibimbap, mazemen (broth-less ramen), Japanese curry or a katsu sando. There’s also fresh sushi and sashimi.

The drinks list includes tap beer from Green Beacon; a bunch of classic cocktails ( Margaritas, Mojitos and Martinis); and an approachable wine list. There’s an impressive range of non-alcoholic options too, including beers from Heaps Normal and Brew Dog, and cocktails using Lyre’s spirits. There are also plans to offer zero-proof wines. 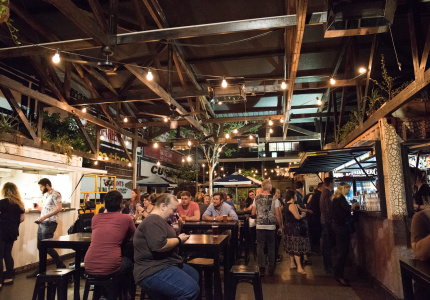