A bunch of Stokehouse Q vets are serving a simple menu of pasta washed down by bagnums of wine, Aperol spritzes and Aeropress Negronis. 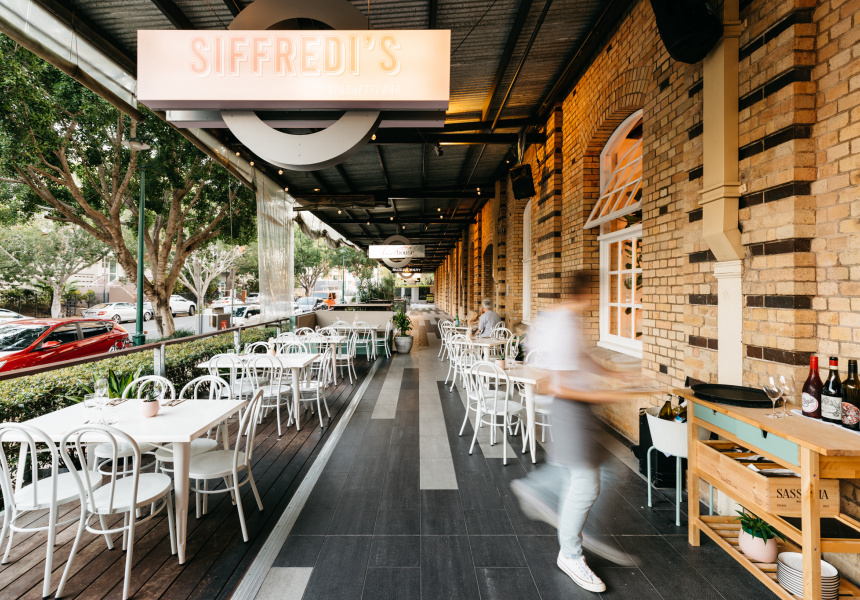 Hospitality groups pulling out, smaller operators moving in. Ask restaurateurs about post-Covid dining trends and this one comes up pretty frequently: yes, we might lose larger players in the market, but taking their place will be nimbler independents helping inject fresh ideas into Brisbane’s dining scene.

Siffredi’s Spaghetti Bar is this prediction made manifest as a poky pastel-pink pasta joint in Teneriffe. Co-owners chef Ollie Hansford, sommelier Aleks Balodis and bartender Stephen Overty have lived it: the trio were made redundant in August after the Van Haandel Group announced the permanent closure of Stokehouse Q.

“[Ollie and I] had kind of been murmuring among ourselves, ready to do something,” Balodis says. “The redundancy cheques just helped put it all together.

“There was nowhere else we wanted to work in Brisbane. With Ollie and I the next thing was, ‘Do we move?’ But I’d just come back from London and wasn’t ready to move again. That’s when we thought we needed to do something together. And Stephen’s been one of our longterm friends over five years.”

Siffredi’s is about as far removed from Stokehouse Q’s white tablecloths as you can get. It’s 50 seats – 10 inside, 40 out – served a rotating menu of five pastas, four snacks and a simple dessert. The food is accompanied by a 12-bottle wine list and a short cocktail menu. And that’s about it. It’s not fine dining. Balodis doesn’t even call it Italian.

“Spaghetti in this instance is just a vestibule for doing the flavours we want to,” he says. “It’s the canvas. None of us have an Italian bone in our body. We never went out going, ‘Let’s do something that’s Italian.’ We just wanted to do spaghetti.

“Everyone’s tightening their belts, so we thought about what we could do that’s really good and fun and about $50 per head spend.”

Still, Hansford’s ever evolving menu is littered with deft touches. You might eat tropical crayfish tossed with pumpkin-seed pesto and stuffed zucchini flower, or braised beef tongue with shiitake mushroom and pickled radish. Snacks include cured meats from Sydney’s LP’s Meats, and Ora King salmon with pickled rhubarb crostini. Hansford is making his pasta fresh daily, using the equipment at Pasta Club in West End, where he recently worked in a consultancy role.

“Ollie goes in there when they’re shut and slams out the pasta and comes back here,” Balodis says. “Hopefully we’ll be able to afford our own [extruder] if everything goes well here in the next few months.”

It’s a similar approach with wine.

“There’s this great wine bar I used to frequent in London called 10 Cases,” Balodis says. “They buy a case of wine and when it runs out, the next one goes on. It’s the same idea here – you come every week and there’ll be something new.”

The list will typically feature four whites and four reds, one sparkling, one rosé, one orange wine and a chilled red. Balodis is also serving 1.5- and 3-litre “bagnums” of wine. In the bar, Overty is serving a short selection of beers and a cocktail list that includes an Aperol spritz, an Americano and an Aeropress Negroni.

It’s approachable stuff in an approachable space, the heritage-brick London Woolstore tenancy keeping much of its pastel pink and green paint job from its former identity as Havana Bar and Dining. The main task was painting over an enormous portrait of Fidel Castro. Otherwise, it’s white Bentwood chairs, a tiled bar and some bright neon signage.

“That redundancy money was good but not enough for a complete revamp,” Balodis says, laughing. “We just got in and painted and cleaned, and it turns out we have a lot of friends who are happy to work for pasta.”