Triple-fried, hand-cut chips and vodka-battered fish arrive on the fringe of Fortitude Valley. Peter Gloftis is nostalgic for the Friday nights of his childhood. He remembers chilly evenings in Melbourne’s western suburbs eating a two-dollar bag of chips from the local fish’n’chip shop.

“There was a Friday-night takeaway in the local village. You’d get your bag of chips, rip a hole in the top – steam coming out – and douse them with vinegar,” he says. “It brings back a lot of childhood memories.”

It’s from this nostalgia that Gloftis has created Potato Boy, a brand new fish’n’chip joint on King Street. It has a simple, front-facing counter decked out in vertical white VJ boards with liberal splashes of bright yellow and red. Behind the counter, an enormous, neon “Potato Boy” sign glows day and night. There’s a simple, approachable menu of fish and chips, chip butties, a couple of burgers and a bunch of sides including calamari, potato scallops, onion rings and house-made pickles.

Still, make no mistake: this isn’t just a reboot of your suburban takeaway. Gloftis is best known for The Lamb Shop a few doors down on King Street (which he has since sold), and in particular its hand-cut, triple-fried chips.

“It’s something I’ve been researching for a long time,” Gloftis says. “It went from the chips backwards. I thought there was a niche for us, a good fish and chippery. There’s only a few in Brisbane that I like to frequent.

“I wanted to create something that was modern in a classic setting, with a classic fish'n'chip menu, but with that modern twist.”

“We went through a lot of vodka and beer for the research,” he says, laughing. “It’s taken six months to get it to where it is. The higher alcohol content of the vodka burns off quickly, which makes the batter super crispy – and it stays crispy a lot longer too, once it’s out of the fryer. For beer, we’re using VB, which is the western suburbs coming out in me again.”

There’s no VB on the drinks menu, with Gloftis opting for a trio of craft beers (Young Henry’s and Byron Bay Brewery’s lagers are typical) and a short selection of organically produced wines.

Potato Boy was originally scheduled to open on March 23, the same day the federal government implemented nation-wide Covid-19 restrictions. Gloftis is philosophical about the timing, saying it was disheartening but that it also gave him time to perfect his recipes and operations. Now, after finally opening last Wednesday, the shop is well and truly humming.

“It’s a huge relief and exciting,” Gloftis says. “A lot of people have been passing by during lockdown, seeing the completed shop, so there’s been that anticipation.

“We’re going through 60 kilograms of potatos a day, and that will increase. Everything is handmade, from the chips to the potato scallops and the sauces. It’s labour intensive but the result, you can’t beat it.”

This story was originally published on July 8. Menu items may have changed. 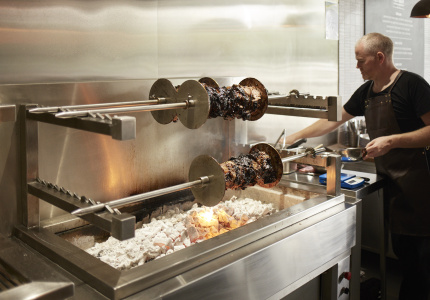