A bunch of Mjolner, Black Pearl, Gresham, Bianca and Captain Melville veterans are pouring a long list of whisky and gin, and an imaginative signature cocktail list, alongside food prepared by Alba Bar & Deli. 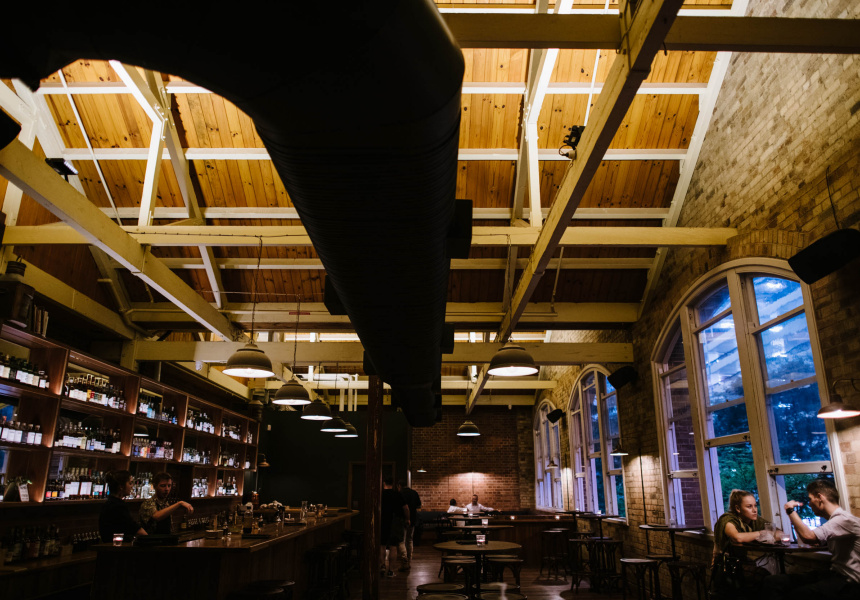 Brisbane’s best cocktail and spirits bars can feel like they’re in an arms race at times. Drinks are getting more sophisticated and back bars ever deeper. Table service is standard these days – maybe with a fancy Martini cart doing the honours.

It means you sometimes forget there’s space for a different kind of bar, and Frog’s Hollow Saloon is different. Opening last week behind the old John Reid & Nephews facade on Charlotte Street (it originally fronted an ironworks, and most recently an antiques store) on first inspection it screams fancy boozer: the fit-out is timber-and-brick heritage, carefully curated menus decorate the tables and there’s a depth of talent running the place that would be the envy of many cocktail bars around the country.

But that’s where the pomp ends. This is a venue that’s top-to-bottom approachable. You order at the bar, not in your seat; the music leans towards jukebox rock; and the enormous double-sash windows are left open, meaning it soaks up the hum of the city when it’s quiet, and the city the hum of Frog’s Hollow when it’s busy. It’s fun and friendly and unique.

“There’s a great motto that we’ve had with previous teams I’ve worked with, and I’ve told the team here: ‘precision without pretension’,” co-owner Peter Hollands says. “It’s just about enjoying yourself, and we’re lucky enough to have a team strong enough that they can be really casual behind the bar, but what they’re making with their hands is really high quality.”

Saying Frog’s Hollow has a strong team is an understatement. Hollands is a Gresham vet and former Bacardi ambassador, while co-owner Nick Winter also did time at The Gresham and has worked at Bianca and Mjolner in Melbourne. David Robinson, a third co-owner, has come from Darwin where he worked at Hot Tamale, Snapper Rocks and Hanky Panky Lounge. And managing the bar’s booze selection is Thiago Silva, formerly of Black Pearl, Captain Melville and Mjolner.

They’re looking after a brilliant booze selection long on independent whiskies from around the world, including Australian distillers such as Starward, 5Nines, Spring Bay and Launceston Distillery. Australian producers also feature prominently on a 50-bottle-strong list of gins. All up, the back bar is carrying 370 bottles, with Winter expecting that to grow to between 600 and 800 bottles by the end of the year.

A signature cocktail menu presents clever twists on the classics. There’s the Scofflaw-inspired Copper & Brass that mixes Sazerac rye with dry vermouth, fig and pomegranate. Or instead of a whisky highball you might order an AJ Carmichael, with The Naked Grouse whisky finished with rhubarb, Golden Eight pear eau-de-vie and cardamon. Elsewhere, there’s a short, sharp list of mainly Australian small-producer wines, and six beer taps pouring Guinness, XXXX Gold and a Hard Fizz orange and mango seltzer alongside a rotating trio of craft beers.

For food, there’s a short selection of old-school comfort eats prepped by the Alba Bar & Deli kitchen a few blocks over on Burnett Lane, and then finished and served over the Frog’s bar. Available until closing time are dishes such as chicken and vegetable soup, whipped beef fat drippings with fresh bread, and beef sandwiches with cheese, piccalilli, Russian sauce and coleslaw.

Frog’s Hollow arrives at a time of transition for Brisbane’s CBD, as its office towers slowly repopulate after the pandemic. Restaurateurs will tell you the city is hard work, but that doesn’t seem to be the case for bars, at least, with its streets and laneways boasting brilliant, buzzy boozers such as Alba, Death & Taxes, Super Whatnot, The Gresham and Dr Gimlette. Frog’s Hollow Saloon now adds another point on the map in a previously under-serviced corner of the city (the bar gets its name from Brisbane’s colonial-era red-light district, which was loosely bound by George, Elizabeth, Edward and Alice Streets).

“We complete a perfect little square," Winter says. “You could start here, walk over to Alba and Death & Taxes, wander down to The Gresham, and then end at Gimlette on Edward Street."

“One of the best things about the city is that there are now great bars open every day, so there’s a really consistent nightlife," Hollands says. “We were amazed over the opening weekend how many regular faces turned up – people who have noticed the build and been hanging out to come in. So the reception’s been great.”