Billy Rouse remembers eating crumpets at the kitchen table of his childhood home in Dubbo.

“Mum would make crumpets before school,” he says. “We always had a freezer full of crumpets, the little Golden ones. It was a big thing for our family.”

Do what you love, they say, and Billy and his brother Miller Rouse have run with that advice and opened Wholly Crumpets, a tiny al fresco cafe in Bulimba. Taking over the old Crumbs tenancy on Oxford Street in May, it’s a charming 20-seater with timber picnic tables and cafe furniture gathered around a quaint shack pumping out Tim Adams espresso and specialty coffee, Leaf tea and, of course, cartloads of crumpets.

But you may have already had a Wholly crumpet. The Rouse brothers started Wholly Crumpets (no relation to Melbourne’s Holy Crumpets) as a wholesale operation in 2018, supplying crumpets to cafes throughout Brisbane (it currently services between 80 and 90 eateries on top of the new Oxford Street spot). But the pandemic proved a game changer for the business, with cafes such as Sister and Florence transforming themselves into impromptu grocery stores to sell items such as eggs, pickles, preserves – and crumpets.

“A few cafes were selling packs of our crumpets already, but then a lot more started doing that,” Rouse says. “And then instead of people sitting in, they were walking out the door with a sixpack. So that made me a busy little boy. That’s when word really got around.”

To meet demand, Billy cooks between 800 and 1000 crumpets a day in a kitchen just off Waterworks Road in Ashgrove. Six electric griddles punch out large, extra-thick discs mixed with Ben Furney flour from Dubbo, Maleny Dairies milk, yeast, and a touch of salt and sugar. After they leave the pan, the crumpets are set in a cold room before being sliced in two in the morning and shipped off to cafes and restaurants across Brisbane, including Wholly Crumpet’s own outlet on Oxford Street.

There, the Rouses are serving up the crumpets in both sweet and savoury styles. There’s a Nutella, strawberry and toasted coconut crumpet; one with banana, honeycomb butter and bee pollen; and a butter, house-made jam and pistachio number. For savoury, you can order them with smoked salmon, dill, cream cheese and capers; avocado, feta, lemon and hemp seed; or tomato, ricotta, herb and balsamic.

Elsewhere, there’s crumpet fruit toast, crumpet toasted sangas, granola and soup. And beyond the standard Wholly sixpack of crumpets, you can take away a one-kilogram crumpet loaf, Tim Adams beans, and Hive & Harvest honey from Maleny.

Wholly marks another shift in the evolution of Oxford Street. The strip has recently welcomed Darvella and Melrose, which join favourite local haunts such as Revel Brewing Co and Bellissimo Coffee.

“I live in Bulimba and the strip had felt a little bit dead,” Billy says. “But more recently it feels like it’s on the up and up … We’ve had comments saying, ‘This is exactly what this placed needed.’

“Everyone’s got a memory of a crumpet. So they’ll have a little story from their past. Although some people don’t know what they are at all, to be fair – but then it’s fun to introduce them.” 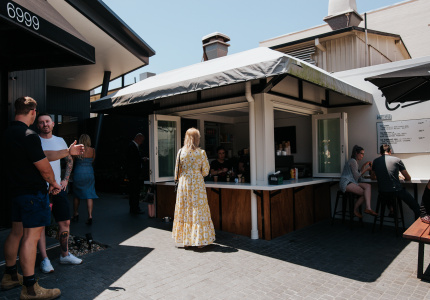