The latest concept from Dan Rodriguez is concealed, as the name suggests, behind what looks like a tailor shop. Step inside for a rotating drinks list with 50 different rums, and live music Friday and Saturday nights. 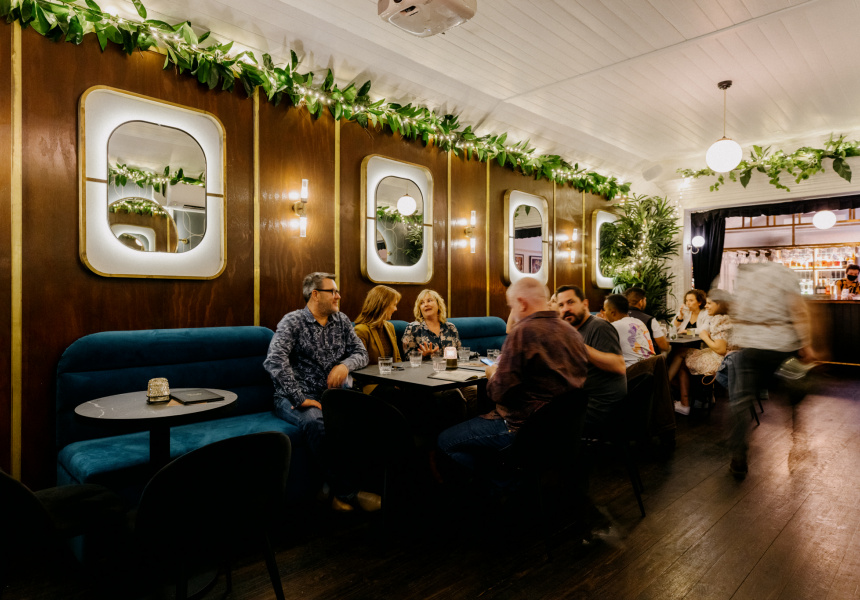 “You’d walk in, and hidden inside was this beautiful cocktail bar playing live music,” he says. “It was awesome.”

It became a theme of Rodriguez’s travels throughout Argentina, Colombia and Bolivia: beautiful, music-driven boozers hidden from view in industrial spaces or behind unassuming shopfronts. He remembers one in particular that was through the back door of a hat store.

“All the nice places that had their tango or salsa nights, they tended to be hidden behind doors. They didn’t want to let just anyone in.”

It’s that spirit Rodriguez is tapping into with The Tailors, his beautiful new Woolloongabba cocktail bar. Occupying a small tenancy next door to his celebrated Canvas Club bar, The Tailors is hidden, as the name suggests, behind what looks like a gentleman’s tailor shop.

A carefully staged window display features a pair of dressed mannequin busts, a sewing machine and a clothes trunk, but step through the door and you’ll simply be confronted with a full length mirror. It swings open to reveal an intimate 50-seat cocktail bar.

This is a different style of venue for Rodriguez, who with his neighbouring Electric Avenue or Mr Badger’s (co-owned with Adam Pykett) likes to tell stories within stories within stories, with intricate designs and detailing illustrating a love for local history. The Tailors is much more of a slick straight-up cocktail lounge, with refined timber panelling, beautiful velvet banquettes and furniture, and mirror-lined walls. At the far end is the bar, while on the backside of the shop window is a bandstand, which features live music every Friday and Saturday nights.

“This will be a more upbeat spot,” Rodriguez says. “Canvas is a date night place, this is the place you can go after. Live music will be from 8.30pm until midnight. So the whole idea is you could go for dinner, then you get to come here and have some nice drinks and watch live music.”

The drinks menu starts with a selection of four cocktails that rotates weekly. You might drink a Golden Humming Bird (white rum with vanilla liqueur, triple sec, sugar and topped off with prosecco), a Cohiba (a milk-washed creation of spiced Bacardi with coffee liqueur, orange, lemon and falernum), or a Paradise (spiced rum with cognac, raspberry, strawberry, vanilla and lemon). Otherwise, there’s a 50-bottle collection of rum sourced mostly from the Caribbean and Central America, which the barkeeps can tap to make a classic of your choice.

Looking ahead, Rodriguez will be filling out the front window with a couple of instruments crafted by Ilja Grawert, the iconic local violin maker who used to occupy a small shop a couple of doors down from The Tailors and Canvas.

“It’s good to pay tribute to Ilja because he’s a really important part of the story of this street,” Rodriguez says.

Otherwise, the slick Logan Road dining precinct welcomed both Easy Times Brewing and Mr Badger’s during the pandemic, and for the first time in years business feels good (it also helps, Rodriguez says, that the Brisbane Lions are drawing people back to the Gabba during winter).

“There’s been a lot of times where the street has felt awesome and suddenly gone down again,” Rodriguez says. “Now, we can feel it being consistent over the whole year, which is really good. I feel people know the venues in Woolloongabba now and they want to come here.”