In an old print shop they’ve built a life-sized tram in which you can go large on Detroit-style pizza, lamb shoulder, whole-roasted chicken, and bottled cocktails. 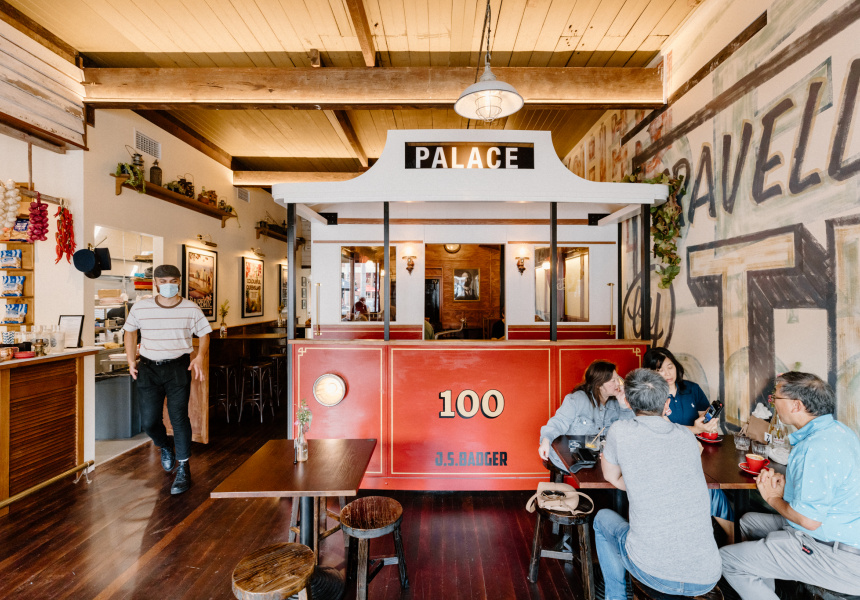 “I think my favourite film was Hook,” Rodriguez says. “The Lost Boys and their lair – I just loved that. It inspired me to build these cubby houses that were a bit interesting and unique.

“I’m a visual person. And that’s what I love about our venues – that there’s that visual and imaginative aspect to them.”

Mr Badger’s is like one of Rodriguez’s cubby houses, but at scale. A joyous, slightly fantastical new all-day eatery in an old Brother printshop in Woolloongabba’s Logan Road precinct, it's inspired by New York neighbourhood delis but also celebrates the history of Brisbane’s old electric tramway system (Joseph Stillman Badger, who Mr Badger’s is named after, was a New Yorker who moved to Brisbane in the late 19th century and later helped develop the city’s original tram system).

There are strings of onions, chillies and garlic hanging above the counter and a cabinet stuffed full of cold cuts. But there’s also an eye-popping life-sized mock-up of a tram on the deli floor in which punters can dine. Much like Rodriguez and co-owner Adam Pykett’s neighbouring Electric Avenue and Mrs J Rabbits, Mr Badger’s is full of design quirks, but with the whimsy turned up to eleven – there’s an original tram timetable on the wall, conductor hats hanging in the corner and vintage Brisbane tourism posters in the hallway.

“It’s not just about having food and drink,” Rodriguez says. “It’s about the history of Woolloongabba, and having a story that people will remember you by.”

On the drinks list is a keenly priced selection of wine, tap and tinned beer, and bottled cocktails produced at Electric Avenue and The Canvas Club (also owned by Rodriguez and Pykett).

It amounts to a very daytime venue, designed to cater to families and maybe folks heading to a game at the Gabba. Those who are not then ready to head home can slide over to Electric or one of the other restaurants on the strip, before kicking on at Canvas.

“Adam has two kids, I have a one-year-old now,” Rodriguez says. “Everything changes. Especially with the pandemic, family is so important. I wanted to do a daytime venue where it told a story, but was also a memorable place where you can go with your family.”