Ninety seats, a local-produce driven menu and a shedload of tequila, all set to those jaw-dropping views. 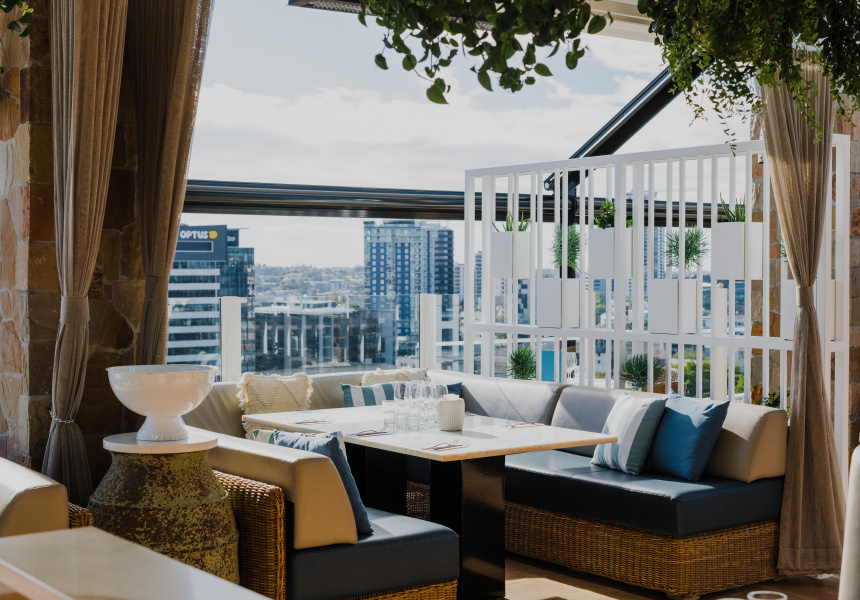 Opening a restaurant to fit into Queensland’s ever evolving Covid-19 restrictions always had the potential to be a crapshoot.

Jason and Katie Coats, along with general manager Josh Mitchell, have spent weeks carefully planning their new pop-up restaurant, Maya, around the state's ongoing venue relaxations. But that depended on Queensland continuing to work down its number of active coronavirus cases.

Thankfully, they’ve managed to more or less hit a bullseye. Maya will open on Saturday night with dining capacity for 90 people. It comes after the Queensland government introduced stage-three relaxations on July 3, a week earlier than planned, and loosened them further than the Coatses anticipated by ditching a proposed 100-person limit for larger venues and instead adopting a blanket four-square-metres-per-person rule.

“We got really lucky,” Katie says. “Date-wise, where we thought things would go, there were a couple of extra things I wasn’t expecting to lift. But everything else has hit that spot where it’s exactly where we wanted stage three to be at.”

The stakes were high. The Coatses weren’t opening Maya in a new space but instead temporarily converting their much-loved Eleven Rooftop Bar into a restaurant. Still, Mitchell had watched the deleterious effects early restrictions had had on Eleven’s operations as a boozer.

Maya wasn’t a new idea – the trio had been working on the concept since a Patrón-sponsored Mexican pop-up in 2019 – and, as Mitchell says, if Eleven could only have 100 people, it wouldn’t really be Eleven. Even so, what initially started as a passion project of Jason’s has grown into an extensive refurbishment and a new identity for the Valley rooftop space.

Stepping out of the lift into Maya is a very different experience to arriving at Eleven on a Saturday night. A liberal application of white paint has given the entire venue a bright, breezy feel. The booths, couches, giant planter pots and even the bench at the front of the venue with its jaw-dropping views of the CBD are all reserved for dining. The Eleven Courtyard, which previously held 120 people, is now an intimate open-air restaurant space set among olive trees and cactus gardens.

“We wanted the experience to feel transformative when they come up,” Mitchell adds. “I’m hoping when people arrive there’s not just one thing they notice – it should be the whole-orchestra experience and overall the venue should feel prettier and more sedate.”

In the kitchen, longtime Coats Group chef Leisa Smith is cooking a Queensland-produce-driven menu that explores a variety of Mexican influences, from the Pacific-inspired food of the northwest to the Caribbean-inflected dishes of the Yucatan peninsula. There are small plates of smoked beef ribs and chargrilled squid with pickled kohlrabi; slow-cooked pork, pulled chicken, and Dos Equis-battered fish tacos; and larger share plates of achiote-spiced chicken, chargrilled flank steak, and pan-seared market fish finished with a jalapeño beurre blanc.

For drinks, there’s an enormous range of tequila, mezcal and sotol; a Mexican-influenced cocktail list (including four different types of Margarita); and a relatively efficient wine list that favours whites, sparklings and vintage champagnes.

Make no mistake, Maya is intended as a pop-up – Eleven isn’t going anywhere just yet, and the bar will continue to trade until the wee hours with bottle service and DJs spinning the venue's usual giddy selection of tunes – but it also has the feel of a permanent restaurant. Then again, that’s what Eleven was supposed to be in the first place.

“Eleven was meant to be food-focused with an additional bar,” Katie says. “And it really moved way too quickly out of our control to [become] a bar with a tiny food focus. This is our time to be able to re-shine the light on food. With controlled numbers it very much feels like a restaurant experience. You’re not going into a bar with 400 people roaming around. It’s very relaxed. I feel like I’m on holiday.”

Maya opens to the public this Saturday July 11.