The Salt Meats Cheese and Eterna crew has teamed up with one of the world’s best bars to create two very special Brisbane boltholes. To open a food and beverage business during a global pandemic is ambitious. To open three could be considered foolish.

Unless, perhaps, if you’re Stefano de Blasi and Edoardo Perlo. The Salt Meats Cheese owners and Sydney imports showed their canny understanding of the Brisbane dining market when they opened Eterna in the old Longtime space on Ann Street in August. It was a very different proposition to the more family-oriented Salt Meats Cheese, serving Rome-inspired eats late into the night, and it proved immensely popular.

Now they’re moving into the wee hours proper with Cielo Rooftop Bar and La Costa Bar, which both opened earlier this month at FV Peppers in the heritage-listed Foresters Hall spaces previously occupied by Altitude Rooftop Bar and Foresters Restaurant and Bar.

“I live just around the corner,” de Blasi says. “We opened Eterna about five months ago and I was always walking past the space, and it had this huge potential. There’s so much going on in this area.”

De Blasi and Perlo had long been looking for a space for a rooftop bar, but landing the right spot was tricky because, De Blasi says, many tenancies don’t even make it to market. But the duo had two things working in their favour: the inside word from hotel group Accor (which operates Peppers) gleaned via their Salt Meats Cheese restaurant at Mantra South Bank, and a team-up with Sydney’s Maybe Sammy, recently voted Best Bar in Australasia and the eleventh best bar in the world in the annual World’s 50 Best Bars list.

“It’s a big site so I knew we’d need to go into partnership with someone else,” De Blasi says. “So I called my friends at Maybe Sammy [owners Stefano Cantino, Vince Lombardo and Andrea Gualdi]. We used to run cocktail bars together in Sydney in 2007 and 2008, and we come from the same area in Italy, so we have a connection there as well … They came up and they loved the space. They trusted me as well. So we decided to take it.”

It would take three months to close the deal but just three weeks to then transform the dark and moody fit-out of Foresters and Altitude into the bright and warm Cielo Rooftop and La Costa Bar. Both are an example of how less is often more when redesigning a venue, and in particular what a liberal splash of light paint can do to.

The old Foresters Bar area has been completely transformed from a gloomy New York-inspired hideaway into an inviting, uncomplicated space with timber floors, cream walls and Persian-green ceilings. On a buzzy night, with table service running, it feels fun and freewheeling rather than stiff and uptight. Similarly, Cielo upstairs has been opened up and given a bright treatment with wicker furniture and brightly coloured booth seating. What hasn’t changed are the splendid views across the Valley to the north and east and the CBD to the south.

Still, you’re really here for the drinks, the Maybe Sammy team shaking and stirring a range of cocktails designed to reflect the sunny coastal spirit captured by both venues. Upstairs, there’s Harry’s Dream, with Bacardi eight-year-old rum mixed with peach wine, lemon, pear and strawberry; and the Azzurro, Tanqueray gin combined with grappa moscato, citrus, Marionette blue curacao and orgeat syrup. Downstairs, things are a little more late-night, with a mango-coffee Margarita, a Portofino (vodka, fino sherry, watermelon, lemon and agave) and a Whiplash Negroni (Johnnie Walker Black, Campari, Talisker 10, cacao white, vermouth rosso and bitters) all featuring. In both venues, the cocktails are backed by an approachable wine list and local craft beers on tap. The idea going forward is for the menus to be seasonal, with the Maybe Sammy team frequently travelling north to train staff on new drinks. Still, De Blasi says it’s the focus on service that sets them apart.

“Making the best cocktail in the world is easy,” he says. “It’s not the reason they’ve won their awards. The awards are because they have the best team. We always say we don't have customers we have guests, because you don't bring a customer to your house, you bring a guest. 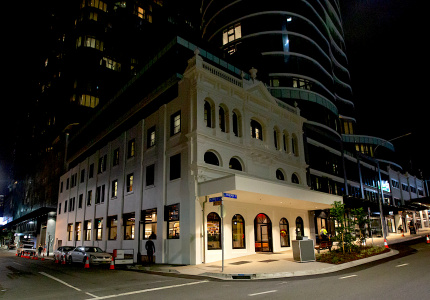