It’s serving Bellissimo coffee and Doughluxe doughnuts in the morning; natural wine, cocktails and Asian beers in the afternoon; and fancy banh mi all day. 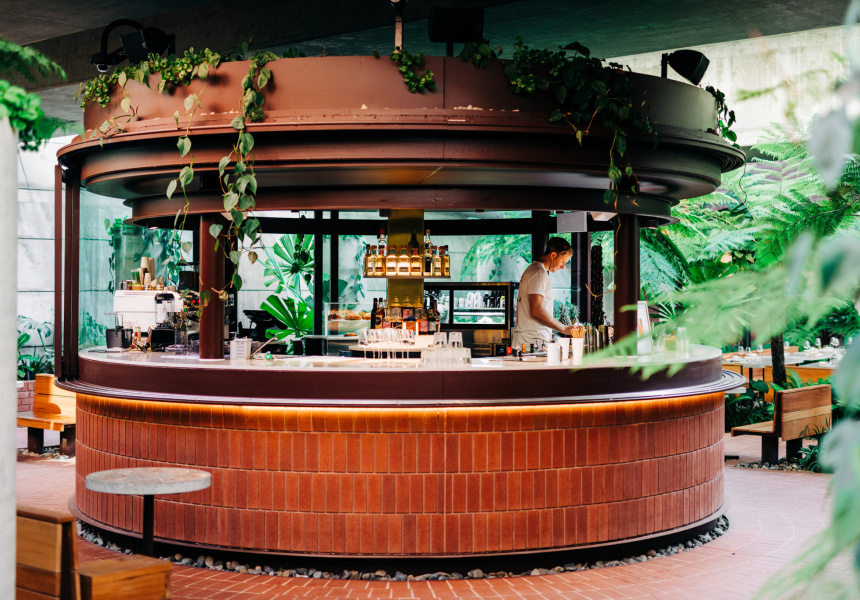 Kiki is in a lot of ways a reflection of David Flynn himself.

Flynn’s hospitality career started out as a co-owner of The Flying Cock and The TBC Club, heaving Valley nightspots (they eventually closed late last year). Then it moved on to restaurants. He was an original partner in Longtime when it launched in 2014 and went on to open Rick Shores and Little Valley, very fine eateries that also happened to be in very buzzy nightspots (or holiday spots, as is the case with Shores).

Now, though, he’s opening a new restaurant, Southside, and a cafe, Kiki, in Fish Lane south of the river. Southside is a clear evolution for Flynn and regular business partners Frank Li, Nick Woodward and Andrew Hohns – an ultra sophisticated eatery in a beautiful Richards and Spence-designed urban park close to Brisbane’s performing arts precinct. But Kiki, a daytime al fresco sister venue that deals in coffee, counter food and a short menu of banh mi, is even more of a shift.

“It’s a progression,” Flynn says. “As you get older, your tastes change, and so your work projects change as well. You and your peers are your own best focus group or case study. So when you’re creating something … your first port of call is, ‘Would I enjoy this?’

“But it’s the same as we did with the Flying Cock those many years ago. We’re just creating something we’d enjoy and go to.”

Kiki kicks off early each day for Bellissimo coffee, Doughluxe doughnuts and Choquette pastries. But Flynn says it’s better defined by what it will serve in the afternoon – an easy-drinking cocktail and beer menu intended to capture the spirit of beach bars in Vietnam and Thailand.

“A beach bar anywhere has two things in ready supply: lots of icy, easy-drinking Asian lagers, and then a cocktail offering in a similar sort of vibe – variations on Margaritas, that sort of thing,” Flynn says. “So really smashable thirst-quenching, right-on-a-hot-day cocktails.”

The beers lead with 333, Singha and Bia Hanoi. There’s also XXXX Gold, a Balter XPA and a Range IPA. For cocktails, there’s a classic Mojito, a Tommy’s Margarita, a variation on the Tommy’s built on pineapple mezcal, and a Fong Fuego which mixes tequila with watermelon and fresh chilli. There’s also an efficient, approachable wine list that favours natural-style wines such as Continental Platter’s Pink Lightning sparkling rosé, Delinquente’s Pretty Boy rosé and a Bones Wines sauvignon blanc.

For food beyond the cabinet items, the all-day banh mi menu includes a vegetarian baguette and a breakfast baguette with Laos sausage, egg and Vietnamese salad.

The venue itself isn’t much more than a large circular kiosk parked in the corner of the Town Square precinct opposite Southside, between Fish Lane and Melbourne Street. It’s more about the setting, with what was once an empty, unused space converted into a vivid urban garden of red brick, timber and tree ferns. Only the occasional roar of an overhead train reminds you that you’re underneath the South Brisbane rail flyover.

“When we took this on we were like, ‘Oh, it’ll just be this little operation that we’ll add on [to Southside],’” Flynn says. “But then we saw the precinct come alive and you realise how great this spot is. It’s this transition space between people’s work in the city and their home across the river. And if they’re cruising through here they have this beautiful space where they can detach from work, and they’re in that relaxation mode.

“I’ve always loved the Valley. It’s that rich history of live music, but it’s much more of a nightlife culture ... This side of the river is that West End bohemian beating heart of Brisbane – it’s more of a daytime culture that carries through to South Brisbane and through to here.”