The old Salon de Co at the The Incholm by Ovolo has been transformed into a boozy bolthole dishing up escargot, Moreton Bay bug spaghetti and a $12 Martini hour. 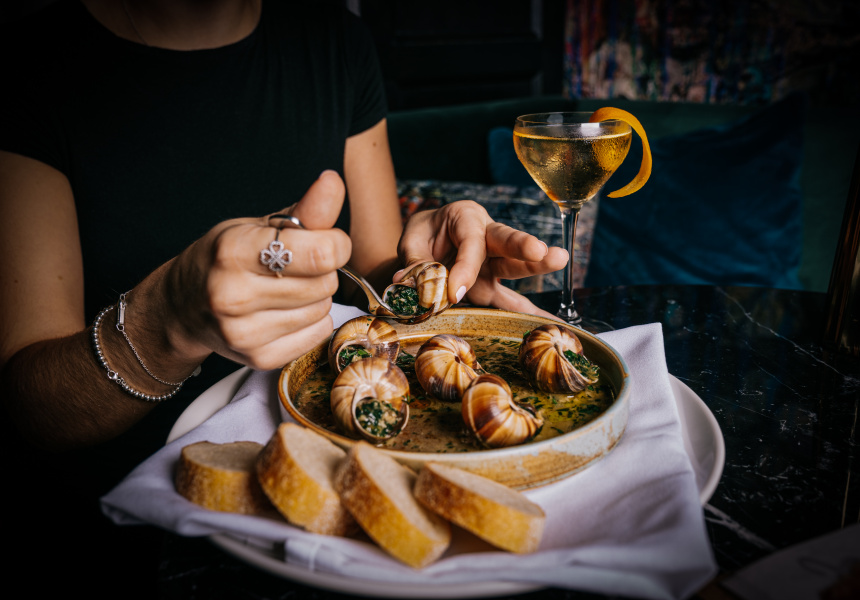 When Jared Thibault first walked into the bar at The Inchcolm by Ovolo, it immediately reminded him of a legendary boozer on the opposite side of the Pacific.

“I used to live in Los Angeles,” says Thibault, Ovolo Hotels’ director of food and beverage operations in Australia. “I spent a lot of time at the bar at the Chateau Marmont. And from the moment I saw The Inchcolm, that’s exactly what I said, how it reminds me of Chateau Marmont. Vince [Lombino, Thibault’s predecessor in the role] had the same impression. So we’ve always had an idea of doing something with that.”

Hence the recent relaunch of the heritage-listed Spring Hill hotel’s bar and bistro as The Incholm Bar. Replacing Salon de Co, The Inchcolm Bar has ditched the dining room that sits behind The Inchcolm’s elevator to gather punters into the front bar and the cosy lounge opposite.

“It’s just that old way of dining in LA, in general – black tie and white jacket – that never goes out of style,” Thibault says. “Musso & Frank Grill [which opened in 1919 on Hollywood Boulevard] is one that comes to mind, with that old Hollywood feel, especially with the food.”

But Musso & Frank is also known for its legendary cocktails, and it’s here The Inchcolm Bar stands out too. Particularly on its Martini menu, which includes classic drinks such as the Martinez, the Bobby Burns and the Ford Cocktail, alongside signature creations such as the Rosemary Oil (rosemary olive oil-washed Tanqueray gin with dry vermouth, rosemary cocktail spice, rosemary, and a feta-stuffed olive), the Cucumber Rose (cucumber infused Tanqueray Gin with Marie Brizard elderflower liqueur, rosewater, prosecco and a cucumber ribbon) and the hero Inchcolm Martini, which stirs together Ketel One vodka, Sipsmith London dry gin and fennel-infused dry vermouth with orange bitters, olive juice, and garnishes with a fennel stuffed olive.

There are 11 variations in all, backed by tight wine and beer lists and a backbar loaded with gin and whisky. The Martinis can be had for $12 a pop every day from 5.30pm to 6.30pm during The Incholm Bar’s Signature Martini Hour.

The opening of The Inchcolm Bar coincides with the relaunch of the hotel as The Inchcolm by Ovolo, the rebrand intended to better highlight the building’s boutique nature and former history as a collection of medical chambers.

“It’s that classic New York-style of boutique,” Thibault says. “Just 50 rooms. It’s creating a whole other brand within Ovolo … Because there’s not really anything like it in Brisbane. It reminds me of hotels back home in the States, but you don’t see a lot of these style of hotels in Australia.”

It’s a change of approach rather than a change of venue, with much of the fit-out and detailing remaining the same, including the Anna Roberts-curated Cabinet of Curiosity that sits beneath the bar, and art from LA-based street artist Mr Brainwash that’s scattered throughout the hotel. In The Inchcolm Bar it’s all heritage timber, plush carpet, marble tables, blackout curtains and soft velvet furnishings, the idea being to create a retreat away from the surrounding city.

“Spending a lot of time in New York, Boston and LA, hotel bars were the cool places to go to,” Thibault says. “Ovolo is trying to create a different experience with its bars and restaurants … every hotel has a bar but why are you going to go there? That unique experience is what we’re trying to deliver with every different Ovolo hotel.”