The future of the high-end diner remains uncertain. High-end Indian diner Heritij has closed less than a year after it opened at Brisbane Quarter, the CBD’s new $1 billion retail, commercial and residential destination.

Broadsheet understands Heritij ran its last service on Wednesday July 31. The Heritij team has made no comment on the closure on either its Facebook or Instagram accounts since last posting on both sites on June 4. A sign placed outside the restaurant’s front door reads, “Dear Customer, please note that Heritij is closed. We apologise for the inconvenience.”

Sridhar Penumechu, one of the restaurateurs behind Heritij, last week confirmed its closure to Broadsheet. He said negotiations were taking place with JLL, the commercial property managers for Brisbane Quarter, but gave no indication of when the venue might reopen. In a statement given to Broadsheet general manager for Brisbane Quarter Jacqui Kinloch also said the closure of Heritij was expected to be temporary and an update would be available in the coming weeks.

Heritij was one of the first venues to open at the luxe new Brisbane Quarter precinct, joining the Brisbane incarnation of Byron Bay’s Three Blue Ducks and Persone by Gambaro. Phat Boy and Phoenix Brisbane have since also opened at Brisbane Quarter.

Boasting impressive views of the river towards South Bank, the huge 788-square-metre Heritij opened in September after well-known restaurateur Nick Pinn (Malt Dining, Drum, Vaquero Dining) teamed up with Penumechu (Saffron Restaurant) and his long-term friend, chef Manjunath Mural – best known for heading up the kitchen at Singapore’s one Michelin-starred The Song of India. The venue is split across a bar, dining room, outdoor terraces and private function rooms.

The closure comes after Pinn ended his involvement with Heritij and its sister restaurant, Kokum, in April following a falling out with his business partners. At the time of his departure, Pinn told the Courier Mail he thought Heritij had a good long-term future. “It’s a great restaurant – an amazing space in a great precinct … I’m disappointed by what’s happened because I put a lot of time and energy into it,” he said.

Describing itself as “a modern play on the traditional word ‘heritage’ [that] embraces roots, culture, heirlooms, experience and ancestry”, Heritij was intended to be a reimagined Indian diner that balanced the contemporary and traditional.

Last year, Mural told Broadsheet he hoped to elevate local thinking about Indian food beyond simple curries to engage with a more thoughtful, experiential offering. “[I want to] prove that Indian food can be something new,” he said. 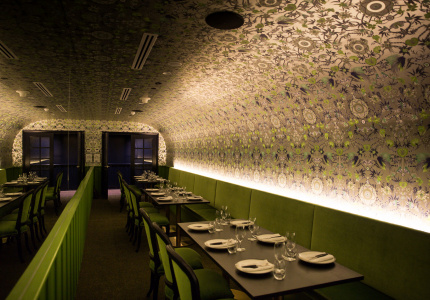