It’s ramped up its takeaway menu and it’s now delivering booze, too. 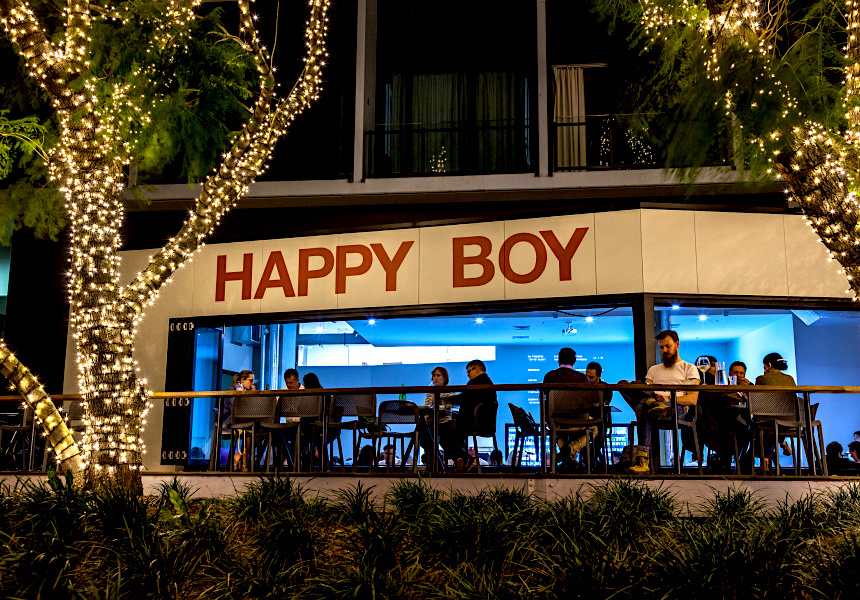 Most high-profile Brisbane restaurants moved into delivery and takeaway late last week in response to Covid-19, but Happy Boy co-owners and brothers Cameron and Jordan Votan wanted to take a few extra days to work out an efficient contactless system for both services.

“Delivery we’ve never done [before], because we run on such lean margins,” Cameron says. “The cut taken by the big delivery operators [Uber Eats and Deliveroo] doesn’t work for a restaurant like ours … We’ve always done takeaway but it’s never been a priority, so we’ve really needed to retool how we think about it.”

“I’ve been really impressed by the response – and we haven’t really put the word out just yet,” Cameron says. “Bopple allowed it to happen. Their system plugs into my point of sale and they take only 5.9 per cent, allowing us to invest that much more in casual staff.”

Happy Boy is delivering within a six-kilometre radius of the restaurant – as far as Hendra in the north and West End across the river. For takeaway, Cameron says the escalating shutdown of the city means the car parks on East Street opposite the restaurant are usually free for customers to pull up, quickly cross the road and grab their “totally contactless” pick-up. Payment for takeaway is done through Bopple or with contactless eftpos (payments over $100 are split into multiple transactions, so you don’t need to enter your pin), and delivery orders are paid via Bopple only.

“For delivery, some of our customers are over the moon. People recognise us and really respond to that, which is a big positive compared to it being a random driver,” Cameron says. “The natural thing would be to hug or shake hands, but we just knock and then step away. We’re wearing gloves so it’s all done in a really contactless way.”

The entire Happy Boy menu is available for takeaway and delivery (including the duck pancakes, previously unavailable for takeaway), along with 10 items from neighbouring Snack Man, which is also owned by the Votans. Happy Boy’s celebrated wine list of natural and biodynamic bottles is also available at takeaway prices, with a maximum of three 750-millilitre bottles allowed per order.

Like many restaurants, Happy Boy is using the delivery and takeaway services as a way to keep staff employed during the shutdown. Some of the kitchen staff at Happy Boy, Snack Man and Greenglass (the Votan’s Euro-minded CBD dining room) are from Hong Kong and France, so they don’t have access to the Australian welfare system.

“That’s our biggest fear – our guys who are on visas,” Votan says. “There’s no safety net for them … The beauty is that because we’ve been able to keep takeaway going, those most at risk are able to keep going, which is good.”