Away from the hustle and bustle of James Street, find a plant-filled oasis dedicated to mezze and share plates, Ottolenghi-inspired salads, Japanese ceramics, and plants. Lots of plants. 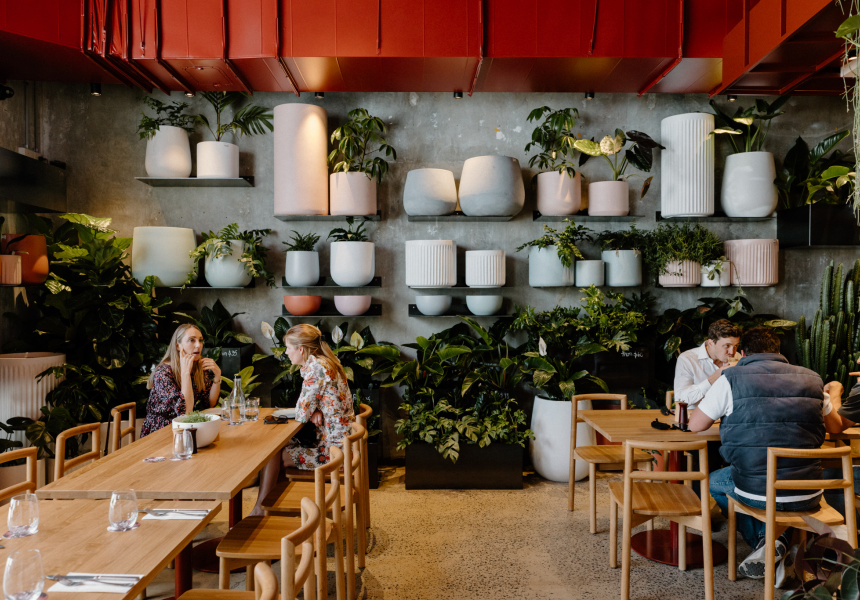 Angela Sclavos describes her latest venue, The Green, as an “ecosystem”. It’s fitting, given the space is teeming with plants. What she means is that every aspect of the business works together as one.

“[The Green isn't] just a restaurant, or a deli, or a plant shop, or a ceramics store,” says Sclavos, who also opened Essa with chef Phil Marchant last month. “It's an entire ecosystem and if we took one element away the others wouldn't be as enjoyable.”

Last Friday, Sclavos and business partner Christina Habchi opened The Green – an all-day Lebanese eatery, plants and ceramics shop, and deli. The concept is an evolution of their popular James Street pop-up nursery, The Green Space, which opened in mid-2020. When the pop-up finished, the duo found a large, airy space just down the street – formerly Redsea Gallery – and paired the nursery with a restaurant that tapped into their Lebanese heritage.

“For years I've been saying someone needs to open a Middle Eastern, Ottolenghi-style deli in the suburb,” Sclavos says. “There was a gap in the market for easy day food for dine-in and takeaway, especially in this precinct.”

Channon Architects and designer Borhan Ghofrani are behind the fit-out of the airy space, which is filled with plants, raw concrete, marble and red accents. There’s a cacti-filled outdoor dining space out the front, while inside, the plants and ceramics store is on the right, the deli is in the centre and the restaurant is on the left.