A Valley favourite ditches Star Wars and sneakers for a move to the big end of town. 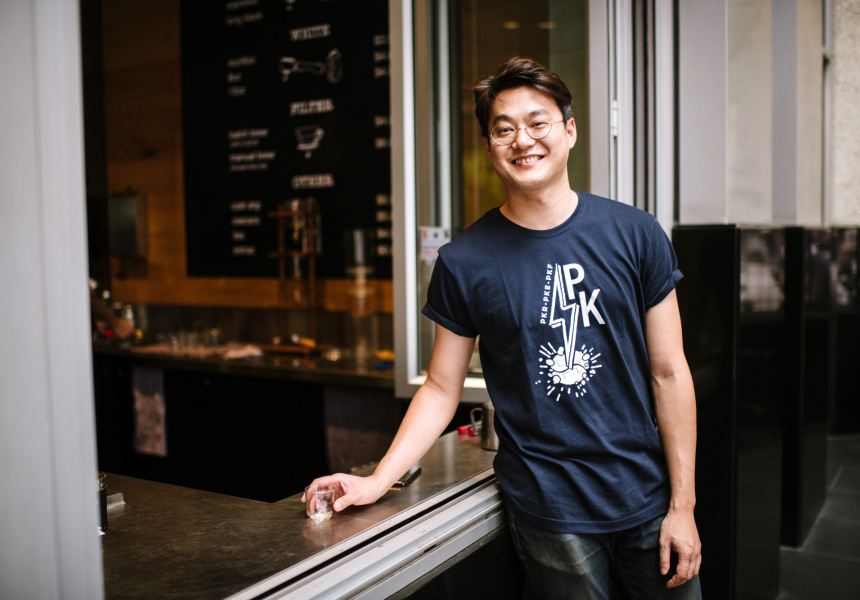 Four-Three-Two-One. This is the axiom under which Ethan Dou prepares his coffee. It stands for 40 per cent beans, 30 per cent roasting profile, 20 per cent equipment and 10 per cent barista. “Here, we appreciate the coffee beans more than anything else,” Dou says.

“Here” is the corner of Edward and Charlotte Streets in the CBD inside the lobby of the Crowe Horwath Centre – the new home for Street Lab Specialty Coffee. Street Lab began in the Valley in early 2017 with then co-owners Nate Swindale and John Bartlet and a whole lot of expensive sneakers and Star Wars memorabilia. Dou has pivoted the new iteration away from the paraphernalia to drill down on his brew.

Since pouring his first cup of coffee in 2009 Dou has seen the local industry evolve but believes Brisbane still has a relatively “young coffee market”, particularly when it comes to black coffee. So he’s put it front and centre at the new Street Lab. “Coffee is meant to be black – it’s as simple as that,” he says.

Not that there’s anything high-minded in the approach. Dou is trying to better inure punters to drinking black coffee with a menu colour-coded with brown, red and yellow to describe subtle characteristics such as chocolate, strawberry or lemon, respectively.

Using a specially imported Swedish batch brewer called The Hipster, Street Lab is offering two or three daily brew alternatives to highlight the difference between beans. You can also order a manual brew at off-peak times and, yes, they’ll happily nail a flat white if that’s what you’re chasing.

Food is a simple selection of cabinet eats, including baked goods from Chouquette and honey sponge cakes and four-layer Hokkaido cheesecakes from Salisbury’s Mountain River Patisserie.

The space itself is straightforward, integrated into the lobby and defined by light wooden panelling and a large green wall opposite the espresso bar. It’s perhaps not as ambitious as the old space, but the swathes of corporate types and outside interlopers already hanging around every morning hardly seem to care.

This story was originally published on March 6 2019.