China seems like an unlikely starting point for Ripiena, but it’s where Nicolo’ and Anita Campagnari first met. At the time, Nicolo’ was working in finance and Anita was an exchange student from Brisbane. Now the pair have opened Brisbane’s first “pasta laboratory” in Fortitude Valley.

The Campagnaris describe a “pasta laboratorio” as similar to a bakery. Product is made daily with a focus on take-home options, but with a small kitchen and a few tables for those who wish to eat in. When Nicolo’ goes out with friends in his native Verona, he says, they rarely go to a fine-dining restaurant. Instead, they head to the neighbourhood pasta shop.

“I think people [in Brisbane] are unaware of this type of food and eating,” Anita says. “What we are doing is quite different.”

The pair took over a street-level tenancy of the Alpha Mosaic building on the corner of Ann and East streets. They fitted it out themselves, installing reclaimed timber benches, white tiles and a giant neon tortellino to the back wall of small space.

Despite the neon, your focus is drawn to the open kitchen where Nicolo’ makes pasta on a big pine-wood table with an Imperia pasta machine and rare tools such as a chitarra (used to make spaghetti). For his pasta, he used either a soft Italian wheat Tipo 00 flour, or a combination of Italian and Canadian grains (Canada is one of world’s largest producers of high quality durum wheat). Eggs come from Roseberry Creek in New South Wales.

“When you look at pasta, which is basically eggs and flour, you can’t play cheap,” Nicolo’ says. “You have two ingredients there so you have to go with the best.”

The Campagnaris aim for complete authenticity with their pasta and sauces. For example, the tortellini is an original recipe from the Brotherhood of the Tortellino in Bologna. The bolognaise recipe comes straight from the Italian Academy of Cuisine playbook.

Anita says they want to provide a corrective for the errors common in many mid-tier Italian restaurants in Australia, where sauces and fillings might have half a dozen competing flavours, or the pasta dough is prepared incorrectly.

“Everything [at Ripiena] is about protecting and preserving [traditional recipes],” she says. “[Pasta] is often bastardised in Australia and we want to change that.”

If you want to dine in, you’ll have to be quick as there are only 20 seats. Otherwise, you can buy fresh pasta and take it home to cook, or take away something from the menu to enjoy elsewhere.

The menu features three pasta lunga (long pasta) dishes including tagliatelle in a choice of bianco (butter and Parmigiano Reggiano) or bolognaise sauce. Then there’s the ripiena (filled) pasta dishes, which include pork loin, prosciutto and mortadella-filled tortellini in a choice of butter and sage or tomato sauce; and slow-cooked beef-cheek-filled agnolotti served in a reduced beef-cheek sauce.

For now, Ripiena is BYO with $2 corkage, although those who bring in a Denominazione di Origine Controllata (DOC) classified wine get to skip the corkage charge. 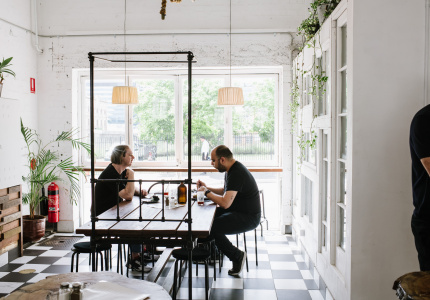