An 1889 Enoteca co-owner and a former Aria head chef are behind the elegant new space, which is serving Moreton Bay bugs with cafe de Paris butter, a fancy cheeseburger, and has an Armagnac cart with bottles dating back to 1931. 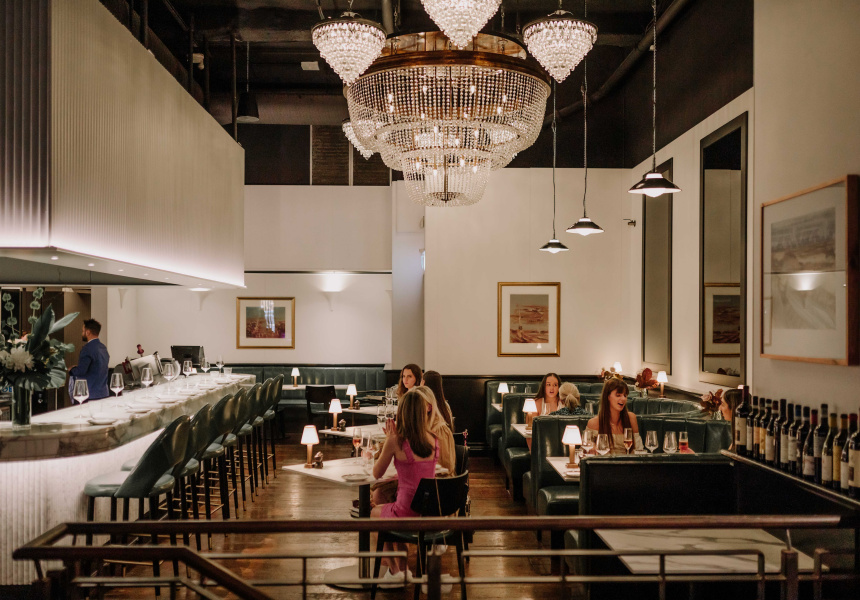 Get Dan Clark talking about the iconic Wolseley cafe-restaurant on London’s Piccadilly Road, and there’s one thing he’ll keep coming back to.

“It’s the service,” Clark says. “It’s egalitarian, where everyone gets an opportunity to go there. You’re not judged on how much you spend. Them valuing their guests equally is super, super important. Because people use restaurants for different reasons. We all know that.”

It’s the same deal at Gordon Ramsay’s Savoy Grill, Clark says, or the Musso & Frank Grill in Hollywood. “You walk into those restaurants and they make you feel really good.”

In that sense, Rothwell’s is the restaurant Clark wants to dine in. The 1889 Enoteca co-owner’s new 120-seat bar and grill opens tonight in the old Jamie’s Italian digs on Edward Street. In the kitchen is business partner Ben Russell, celebrated for his long tenure as head chef of Aria Brisbane.

“You create restaurants you want to frequent, you really do,” Clark says. “Peeling off that layer of snobbishness is really important to us.”

Not that Rothwell’s skimps on the details. Parked in the ground floor of the heritage-listed Rothwells Building, the Marc & Co-designed space is split into a front bar, a dining room arranged around marble tables and an enormous marble raw bar, and a downstairs area angled towards private functions. Throughout, original timber and tile floors are complemented by sumptuous green leather booths, towering mirrored walls, and vintage lighting that includes an enormous chandelier. It’s a beautiful space, well-pitched for its location opposite the glossy Edward Street boutiques.

In the kitchen, Russell is preparing a pan-European menu anchored in French techniques.

“I worked as a private chef for quite a few summers [in the south of France], and that influenced the brief here,” Russell says. “We wanted classic food, but it’s ended [up] maybe 10 or 20 per cent more French than we originally intended. But then you’re conscious that you live in a subtropical climate, so it’s maybe a little bit more olive oil and a little less cream.”

For starters, you might order chicken liver parfait with cornichons and toasted brioche; beetroot with radish, walnuts and goat’s curd; or a classic caesar salad. Mains include market reef fish with roasted fennel, tomato and a basil vinaigrette; duck cassoulet with confit leg, Toulouse sausage, pork belly and white beans; and roasted lamb with braised lentils, feta and black olive.

There’s a grill section that presents Moreton Bay bugs with café de Paris butter, and numerous cuts of beef with onion rings, watercress and a selection of sauces. Elsewhere, there’s a relatively straightforward selection of pastas that includes pappardelle with beef-and-tomato ragu and parmesan; spaghetti with spanner crab, chilli and garlic; and tagliarini with sea urchin, caviar, butter and chives.

The two stars of the menu are a seafood platter and a 600-gram beef Wellington served with red wine sauce. Both are designed to be shared. There’s also a bar menu for those dropping by – it includes plates of oysters, salad niçoise, a club sandwich and a fancy cheeseburger.

As always with Clark, wine plays a central role in the experience, with a 350-bottle list tapping French regions such as Burgundy, Loire Valley, the Languedoc and Champagne, as well as classic Australian and Italian varietals.

There’s a cocktail list that features an Old Fashioned, a Gibson, a Negroni and a Hemingway Daquiri, as well as a Martini delivered in a coupe glass with a sidecar on ice. There’s also an Armagnac cart with bottles dating back to 1931.

Rothwell’s arrives at an interesting time for CBD restaurants. The fine dining scene, as much as there ever was one in Brisbane, is largely gone, the mannered accoutrements that once held it up eventually dragging it down in the industry’s move towards the middle market. If you’re not slamming through the covers down at Riverside or Eagle Street Pier, restaurateurs say, then you might as well fold up your table linen and go home.

The answer may well be places such as Rothwell’s, or Banc up on Queen Street Mall, or Walter’s Steakhouse on Alice Street. These are not fine diners. They’re more experiential and organise themselves around simpler ideas. Their kitchens are still produce-driven, but the service prioritises a more egalitarian brand of hospitality.

“The CBD is still the heartbeat of the city,” Clark says. “We want to make Rothwell’s a destination. We want people to come here for the seafood, the grill, the great pasta section, the great wine list and the service. It sounds really simplistic, but that’s exactly what it’s all about.”