It’s the same, but very different. Brisbane’s restaurant opening of the year is here. 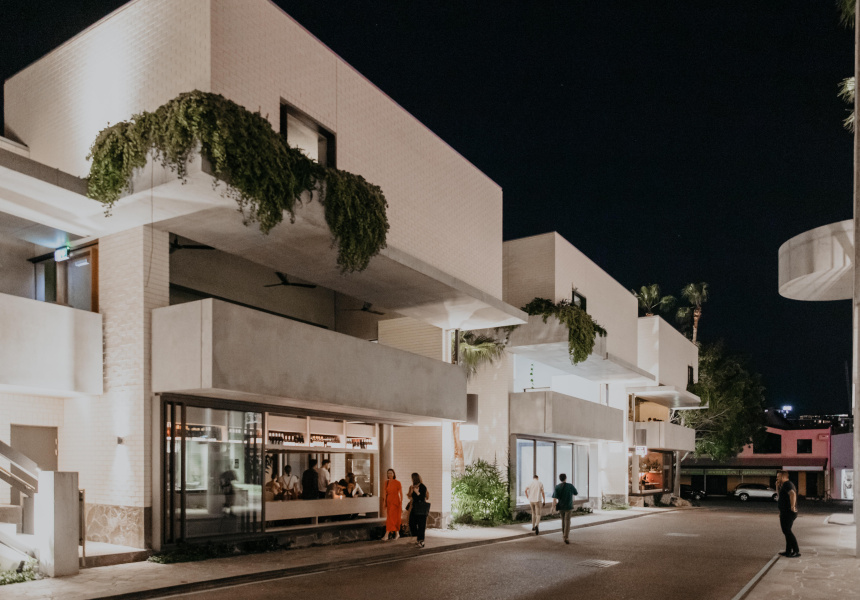 In the days approaching the Thai restaurant’s 2014 debut, he was out of money. A problem, because he was also short on furniture. Simon and his co-owners didn’t even have enough tables to fill the restaurant floor.

“We were at the airport unloading a shipment of crockery from Thailand,” he says. “Because we couldn’t afford to pay for transport. And when we went to throw some packing in the bins, there were these imported wooden pallets.

“They weren’t like the prickly things you get in Australia. To our untrained eye, they looked amazing. The guy there said we could take them. We were trying to work out what we could afford for tabletops – which was nothing, so we took these things and stained them and hammered them together.”

It turned out the pallets were made from veneered particle board and after a month they’d bent “like skatebowls” Simon says. But it didn’t matter. Longtime was open.

How things have changed. Simon tells this story while sitting in his new restaurant, Same Same, which opened on Wednesday night. He reclines on a turquoise Grazia couch in a space designed by in-demand Brisbane architects Richards and Spence, responsible for The Calile opposite. Ask him if 2014 feels like yesterday and he looks a little dazed.

“I can’t believe in five years we’ve evolved from almost putting milk crates on the ground to this. We’ve got furniture from Cult,” he says, pointing at a bar table. “It’s amazing.”

It is amazing, but then it also makes sense. Almost from its opening night right through to its final service last Saturday, Longtime was packed with diners drawn in by its exceptional Thai food and late-night charisma. Now Longtime is a celebrated slice of Brisbane restaurant history, preserved not as a museum piece but as the city’s hippest new function space.

Same Same is its successor. And while Simon and co-owners Frank Li, Bianca Marchi and head chef Ben Bertei have gone out of their way to reassure Longtime tragics this is the same experience, it’s also an evolution. Gone are the dark digs, funky placemats, timber tables and quirky mismatched pieces of crockery. In their place are great runs of concrete, cream brick and vermiculate, arranged with Richards and Spence’s typical precise geometry. The standout features are the central kitchen and an enormous, tightly arched ceiling on the righthand side of the venue, under which sits a long communal table.

“We’ve rethought service," Simon says. "Last night the dockets were coming into the kitchen and the team is ready to go, but at one point I heard Ben say, ‘Slow it down’. Because that was the reason we moved, to slow it down.”

It’s true: on a busy night Same Same buzzes much like Longtime, but with 20 fewer seats it comes without the organised chaos.

Bertei’s menu has evolved too. The addition of a charcoal firepit to the kitchen allows him to develop a bunch of lighter meals to both make Same Same more lunch friendly and to offset the cherished curries and noodle dishes that have rolled down the hill from Longtime. There’s grilled chicken with lemongrass, turmeric, garlic, ginger and shallots, and grilled pork neck served with toasted rice, spring onion, chilli and fish sauce. Other dishes, such as the beef short rib and the som tum, have been refined or given more spice, a result, Simon says, of local diners’ growing familiarity with authentic Thai cuisine.

It comes back to that evolution. Thai food has leapt forward in Brisbane over the past couple of years. It’s grown up and so have Simon, Li, Marchi and Bertei. Hence Same Same’s slower style of service and the more nuanced 140-bottle wine list, and the small bar that overlooks Ada Lane, and the beautiful upstairs green-tiled boozer, Los, with its 110-bottle long list of tequilas – designed as its own destination but also a more comfortable space in which to wait for a table.

But there are other great options nearby, Simon says. If you couldn’t immediately sit down at Longtime you’d wait in the venue’s own alleyway – there wasn't much else within walking distance. Near Same Same, there’s Lobby Bar across the lane, or Gerard’s Bar a block away. After dinner, there’s Messina next door.

“The precinct they’ve created, it’s so iconic. It’s just a really great place to be in,” Simon says. “The Calile, it’s the most beautiful hotel in Australia. There are so many great options around us. I have to pinch myself that we’re here.” 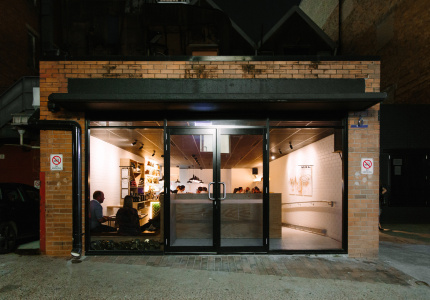 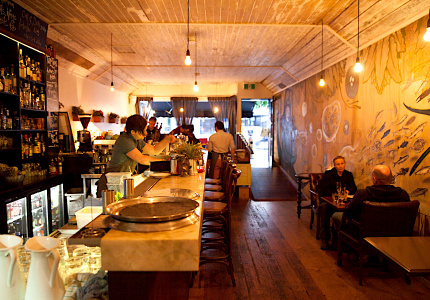