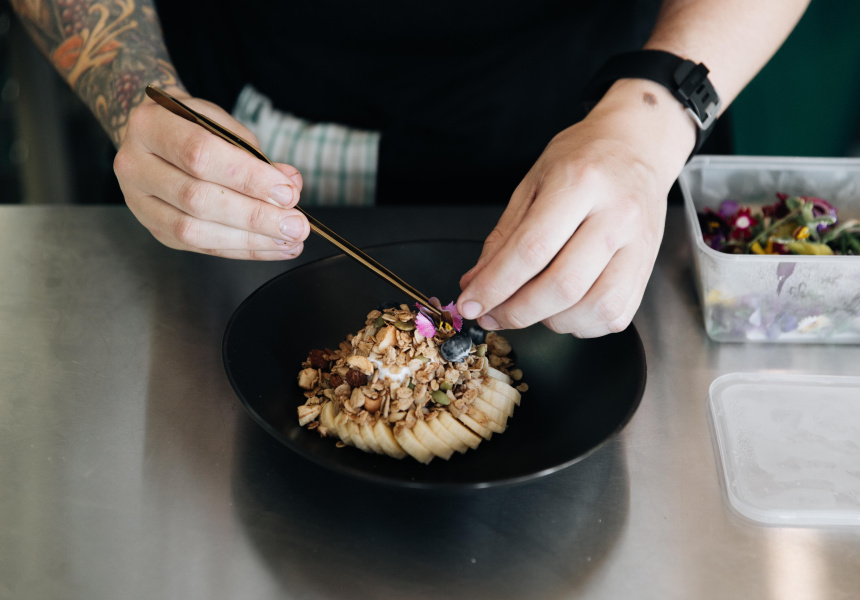 Sacha Muchall might not be a West End local, but he’s always loved the suburb’s community spirit. It’s what attracted him to open his vegan cafe, Grown, on Buchanan Street earlier this week.

“I think there’s a large population of people who are either vegetarian or vegan, [who] are looking for somewhere to go,” says Muchall, who’s a vegan himself. “There was a gap in the market and I thought [West End] was a good spot.”

Muchall joined forces with Studio Lagom’s Will Ryan to create a smart, minimalist space with indoor and alfresco seating. Clean white paint provides the perfect backdrop for dark green tiles, greenery and strand wood, which adds a coarse, natural texture to the space.

The kitchen uses organic and sustainable produce from FoodConnect (the social enterprise that sources produce from local farmers), and Sunshine Coast’s Suncoast Fresh. Any waste is sent to compost at the Jane Street community garden, which is located just 150 metres down the road.

“We’re trying to keep everything as sustainable, as local and as quality as we can,” says Muchall.

Muchall proudly declares everything on the menu, except for the bread, brioche and margarine, is made in-house. This includes the hash brown that comes with roasted tomatoes, avocado, wilted spinach and confit capsicum sauce; and the “housemate Vegemite”, served with avocado and sesame cheese on multigrain sourdough.

After working the grinders at Tiller, Willow And Spoon, Microlot and U&I Espresso (which he used to own), it’s fair to say Muchall knows his coffee. At Grown, the house-blend is from Wynnum’s Dramanti, but single origins and filters from other local roasters, such as Parallel, Sunday’s Coffee Co, Light and SUM, will rotate regularly.

For now, Muchall wants to focus on getting breakfast and lunch right, but in around a month and a half he’s looking to launch a dinner menu complete with vegan wine and beer. 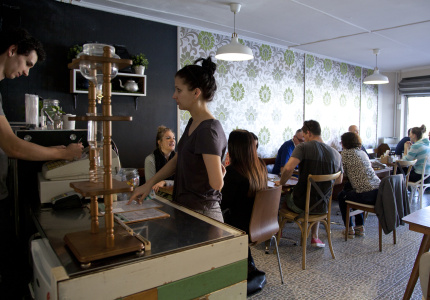