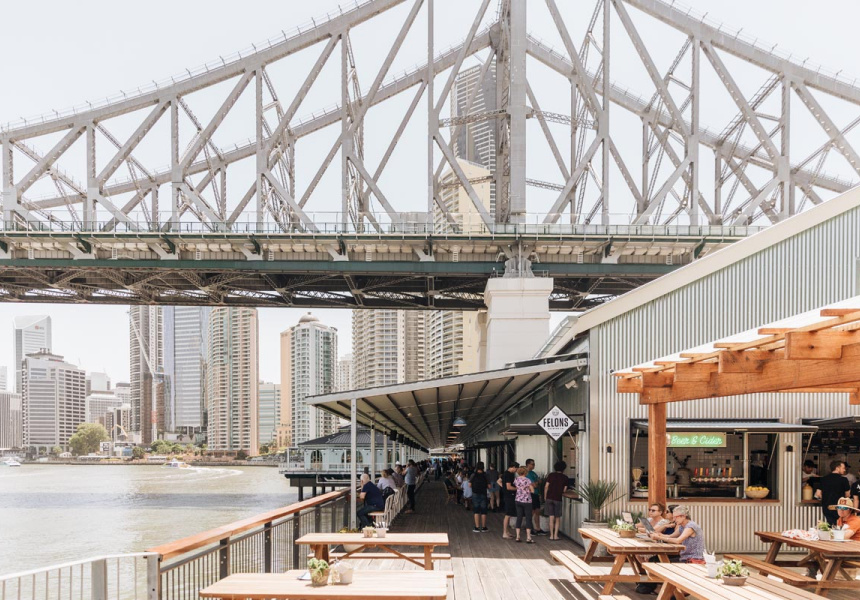 Eight years. That’s how long Adam Flaskas has been thinking about this moment. The co-owner and director of Howard Smith Wharves won the tender to develop the riverfront precinct six years ago and has been busy ever since bringing it to life with the help of a huge team – including Felons Brewing Co’s general manager Ash Cranston and head brewer Tom Champion.

Felons finally opened in November, making it the first of Howard Smith Wharves’ many venues (which includes Greca and Stanley) to begin trading.

“Everything we’ve done here, we’ve taken a long-term view and right from the beginning I never wanted to cut any corners,” Flaskas says.

Felons comes at a time when Brisbane’s brewing scene is the fastest growing in Australia, but Ash Cranston reckons the local market can take more weight.

“For us it’s about just adding to the vibrancy of scene that already exists,” Cranston says. “We know there’s a great beer scene that’s already developing in Brisbane and we think we’ve got the role to play of a very visible, local supporter of that … there are so many opportunities to have fresh conversations with people that haven’t been on the same journey that we’ve been on.”

Felons is a 1000-square-metre operation that sits beneath the Story Bridge. Half of the venue is an almighty deck that extends out on to the Brisbane River. The brewpub is split into five main areas including a seafood and grill restaurant; a casual dining area serving up buckets of oysters and prawns, fish and chip parcels and fresh poke bowls; a large deck; a courtyard; and a retail space offering take-home beers, brewery tours and tastings.

There are 56 taps spread between the main bar and the Felons beer trucks that are parked across the precinct when they’re not servicing offsite events, so you won’t go thirsty. As is the modern fashion, the brewery operation accounts for a large part of the indoor space. Windows allow passers-by to peer in on the set-up, which includes a bottling line that kicks into gear three times a week.

As for the beers the core range consists of a crisp lager, an IPA, a pale ale using only Australian malts and hops, a mid-strength California common, and a cider produced using apples from Stanthorpe. Newer, more experimental styles have also started cropping since opening.

“The challenge is making sure we’re keeping up with the needs of craft beer drinkers,” Cranston says. “They’re a promiscuous bunch, always looking for flavour, and we want to make sure that we’ve got those beers that they’re looking for.

“We’ll be coming out with bigger flavoured stuff in the near future for those more pointy beer drinkers.”

The entire precinct has been purpose-built to accommodate events, functions and festivals. Even the surrounding greenways are licensed, meaning guests can drink Felons beer and cider throughout the whole area.