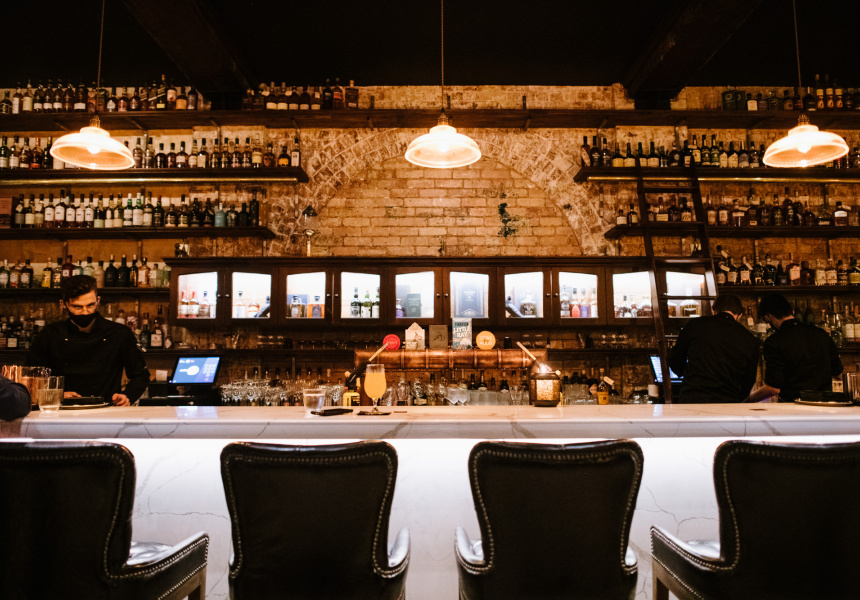 The pandemic changed the way we drink.

When Covid-19 restrictions were first eased in May last year, bars slowly reopened but – counterintuitively, perhaps – you weren’t allowed to stand at the actual bar.

Instead, table service became a thing. You’d grab a seat, scan a menu (or QR code), order and like magic a drink would appear in front of you. Even in big high-paced boozers such as Felons Brewing Co and Mr Percival’s, getting a frothy or glass of wine delivered to your seat was suddenly the norm.

Of course, by now Brisbane punters have long been allowed (lockdowns permitting) to stand at the bar again, but does anyone really want to anymore? Combined with the rise of a more thoughtful approach to drinking and the popularisation of boutique spirit brands, the past 12 months has seen a cultural shift in how we imbibe.

Martin Lange, Wiebke Lange, Blake Ward and Belinda Ward have always had a stronger focus than most on service – including table service – at Death & Taxes, their enormously popular Burnett Lane bar. So it makes sense they’re leaning in hard at Dr Gimlette, an immaculate new cocktail joint they opened last week in the old Metro Arts building on Edward Street.

Dr Gimlette has plenty to recommend it. Occupying the Metro’s old theatre space, it boasts a raised timber floor and raw brick walls with feature timber panelling. Along one side of the room is an enormous nine-metre-long marble bar that currently carries 300 spirits, with the intention for the collection to grow to 700 bottles. But the venue’s calling card is a pair of vintage Martini carts that Martin Lange sourced online from Europe. They service four enormous leather-lined booths.

“Maybe hotels and other bars are using carts to bring cognac to the table or something similar,” Martin says. “But nobody in Brisbane that I’m aware of has been able to give this kind of service through a cart. In Europe, it’s more common.”

“It’s about bringing that experience to the table,” Wiebke says. “Belle and I, coming more from the customer side, we thought we’d love to see this. I think the bartenders were worried it might feel a bit tacky … but we get these large groups coming through and it helps them connect with our staff.

“You can have a group of 10 and everyone’s saying, ‘Okay, I’ll try this gin. I’ll try that.’ It’s a lot of interaction and gets people talking.”

The carts also underline Dr Gimlette’s ambition to build on Brisbane’s existing cocktail scene. The bar will soon install a liquid nitrogen tap, is investing in bespoke glassware, and will have a special focus on seasonal cocktails. Some of this is being done elsewhere in town, but perhaps not to the extent of the world-famous bars that the Langes and Wards want to emulate: American Bar at The Savoy in London, The Dead Rabbit in New York, or Black Pearl and Eau De Vie in Melbourne.

“Particularly in the CBD,” Martin says. “The Cloakroom was very good but it was [small]. And focusing as well on how lucky we are in Queensland to have the fresh produce we have … it allows bartenders to continue to be creative and keeps them on their toes.”

Otherwise, the first edition of Dr Gimlette’s cocktail list features the kind of approachable imagination you’d typically associate with Death & Taxes. You might start with a Memento, a fruity, herbaceous take on a Gimlet that features mandarin and thyme verjus, and lemon cordial. Or an Elation highball built from Herradura Reposado tequila, black cherry, clove, fermented chilli and lemon. Boozier drinks include a dirty Martini variation called the Swazey that stirs Tanquery with Never Never aquavit, Dolin vermouth and caper brine. And the Full House, where Ron Zacapa 23 year-old rum is mixed with pineapple, vanilla, coconut, spice, amontillado and orange. Backing up the cocktails is an Old World-leaning wine list, and a clutch of craft beers and a rotating spritz on tap.

This is an evolution on Death & Taxes (and Gimlette’s other sister venue Cobbler, which is owned by the Langes) in other ways. Despite the plague mask and brooding Kevin Best vanitas-style art, Gimlette is intended to be a slightly lighter and brighter venue and – again, tapping into pandemic trends – more of a pre or post-dinner hideaway, rather than a destination in its own right, leveraging off the new wave of restaurants at nearby Eagle Street Pier such as Coppa Spuntino, Naga Thai and Opa.

“There’s that culture now for pre and post-dinner drinks,” Belinda says. “We’re hoping people really take advantage of that with us.”