Coming Soon: Rodd & Gunn Is Opening a James Street Restaurant With a Michelin-Star Veteran and New Zealand’s Only Master Sommelier

From an iconic, heritage-listed spot it will serve local produce, fresh seafood and a 250-bottle wine list. And you’ll be able to enjoy it outside on a first-floor wraparound verandah with views of the precinct below. 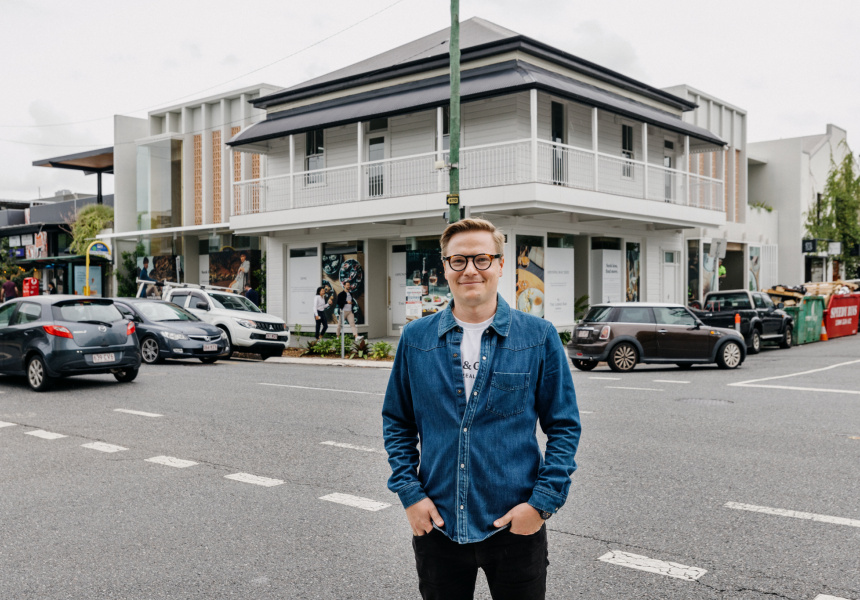 The venue is The Lodge Bar & Dining, first launched as a fancy boozer in Queenstown six years ago. The location is James Street, the centre of modern Brisbane’s retail and dining culture, inside the iconic Queenslander shop once home to Jamie’s Espresso and Molten Store. The talent is Matt Lambert and Cameron Douglas, the former a veteran of The Musket Room in New York where, as co-owner and chef, he guided that restaurant to eight consecutive Michelin stars, the latter New Zealand’s only master sommelier.

Yes, the restaurant and bar will also be connected to a new Rodd & Gunn retail space, but you won’t be sitting among stacks of slacks and puffer jackets. Instead, The Lodge Bar Group executive general manager of hospitality Josh Beagley says, it will be all American oak floorboards, brass highlights, blackened steel and flagstone walls.

In short, The Lodge is serious business. The way Beagley explains it, the food and beverage project is part of a wider decade-long strategy to broaden Rodd & Gunn’s customer base. The brand now skews younger, and has entered the US, UK and Canadian markets. So if you’re scratching your head thinking a restaurant and bar on James Street will put Rodd & Gunn in front of people who don’t usually engage with the brand, that’s the point.

“Exactly,” Beagley says. “By having it both on James Street in that iconic location, we’re able to really make a statement about what our intent is … It’s [previously] been very successful in attracting new customers and getting people to see us differently.

“In terms of hospitality and retail in Brisbane, there’s no better precinct than James Street. James Street has that real strength of having both industries really well covered.”

The Lodge will stretch across both floors of the heritage-listed, circa 1876-built Lawless Grocery Store building, with a 120-seat restaurant downstairs and a 30-seat bar with banquette seating upstairs. The bar area will also make use of the building’s wraparound verandah, lending it views across the James Street precinct. The fit-out is intended to capture the sense of a classic Kiwi lodge but fine-tuned for Queensland with flagstone in place of New Zealand schist.

For food, Lambert and head chef James Angelenos (formerly of The Manly Greenhouse and Hotel Centennial in Sydney, and The Musket Room in New York under Lambert) are developing an a la carte menu that focuses on local produce and freshly caught seafood, in particular. There will also be a significant snack menu available in the bar.

For drinks, Douglas is compiling a hefty 250-bottle list that champions New Zealand wines, as well as interesting drops from Australia and Europe.

“I think you’ll really see the focus on New Zealand wine through the by-the-glass range,” Beagley says. “Regardless of the category of wine, we’ll make sure we have New Zealand represented.”

But will it all work? What’s appropriate for Queenstown, where tourists often wander about on a permanent adrenaline high, doesn’t necessarily translate to the big smoke. Then again, The Lodge has already opened venues in Auckland and Melbourne. Besides, Rodd & Gunn’s Australian head offices were once on Commercial Road – they know James Street well.

“We used to get lunch on the strip and head to Jamie’s for coffee,” Beagley says. “So when that site was presented to us, it was really exciting. It was taking us back to where we’ve been and come from and it can really showcase how far we’ve brought the brand.”

The Lodge Bar & Dining will open on Thursday May 19.