It’s (probably) the country’s highest awarded coffee roaster, and finally it will have a headquarters fit for a king: with six coffee roasters and house-baked sourdough and pastries. 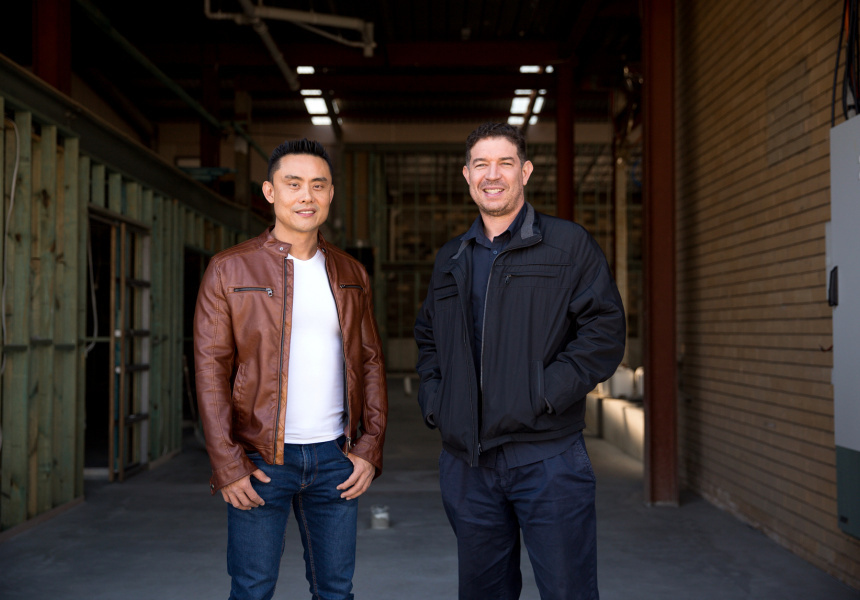 Michael Koo and Mark Bignell, pictured on the site of Bellissimo Coorparoo in 2018

In 2016 and 2017 it was concerns over traffic. In 2018 and 2019 it was a stack of unplanned building delays. And then in 2020, of course, came the pandemic. If nothing else, the opening of Bellissimo Coorparoo has been a journey.

Finally, though, Michael Koo and Mark Bignell’s celebrated coffee company (with around 200 industry awards, is it still “Australia’s highest awarded coffee roaster”? Yes, last time Bignell checked, although he says he can’t be sure after 2020 kiboshed the competition calendar) is ready to unveil its enormous centrepiece – a Cavendish Road warehouse and roasting headquarters featuring six coffee roasters (in 90-kilogram, 75-kilogram, 12-kilogram, five-kilogram, 2.4-kilogram and 100-gram sizes), a commercial kitchen, cafe, office spaces and a temperature-controlled storage room. All up, it’s six times bigger than the duo’s popular Bulimba cafe.

“It took us way longer than we realised,” Bignell says. “But we've always held faith that when it does get completed this is going to be an exciting venue … it was just a matter of giving us a greater sense of patience and faith in the outcome we were looking to achieve.”

The space has been finished for some time, with Koo and Bignell using the on-site offices in 2020, and moving in the roasting operation in January. It’s a complete transformation from the warehouse’s former guise as an office supplies outlet, the building’s tired brick facade now rendered in slick black and framed by handsome timber planter boxes.

Otherwise, the delay allowed the duo to rethink a few elements of the new cafe and bed in baker Daniel Smyth, previously of Paddock Bakery and Bam Bam Bakehouse on the Gold Coast. He’s now producing baked goods for the entire group.

“We now bake in-house our own sourdough breads and our lines of sweets and so forth,” Bignell says. “That’s servicing our cafes and some of our partner cafes. We wanted to do that to really make the product as fresh as possible.”

Bellissimo Coorparoo will open in mid-April. It will mark the end of a five-year saga to unveil the cafe, which began after community concern in 2016 over the venue’s potential to cause traffic congestion at the neighbouring Coorparoo Secondary College. Bignell and Koo told Broadsheet in 2018 that that issue had been resolved after the addition of extra parking out front of the warehouse and a traffic engineer giving the venue the green light.

Bellissimo Coorparoo will open at 12 Cavendish Road in mid-April.