Expect a restaurant, patisserie, fromagerie, wine and cocktail bar, coffee roaster, and 15-hectolitre brewery with a 20-tap taproom, in a former timber mill. 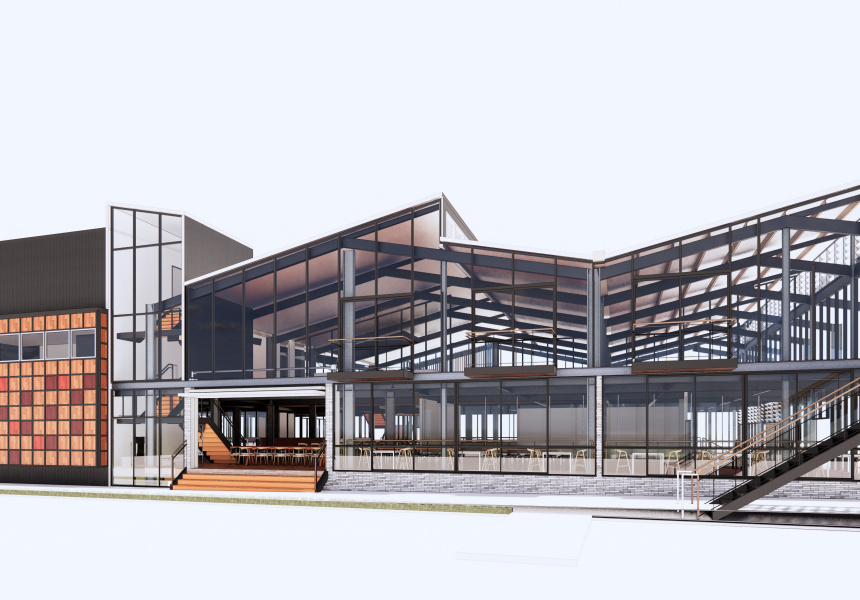 In early 2020, with Covid-19 at the gates of Brisbane’s food and drink industry, Craft’d Grounds could’ve easily seemed like a doomed project. Now, a year later, it feels like a perfect project for this city.

In those 12 months, husband and wife co-owners James and Kirstie Rennell have watched as Brisbane’s hospitality scene continually reshaped itself around the pandemic. Business at their thriving Albion functions company The Black Brisbane suffered under government restrictions on public gatherings. At the same time, neighbouring cafe Collingwood Black was shifting more coffee than ever before as work-from-home locals necked espresso and looked to support neighbourhood operators.

“That gave us an opportunity to really consider what it is that we want to do for the community,” James says. “They would’ve been lost without us or other cafes in the area. It became people’s sanity, their connection. They’d talk to our baristas about what they wanted, and it was more of what we were already providing them — great food, great coffee, a great space, somewhere relaxed that they can bring their dog.”

Craft’d Grounds will provide all that, and more. Once completed in late May, the 2600-square-metre lifestyle and food precinct will feature a restaurant, patisserie, fromagerie, wine and cocktail bar, coffee roaster, and 15-hectolitre brewery with a 20-tap taproom. The former timber mill will also host a regular farmers market, a street-art lined laneway, and capacity for various events.

And the way James Rennell tells it, it will be almost obsessively locally focused. Gone, he says, are the old ways of doing retail and food and beverage.

“People want something that's much more authentic,” James says. “Beyond us, there will be eight partners trading here and there won’t be a partition between them … There are a lot of new precincts coming online in Brisbane that are challenging those old norms.”

The Rennells should know. Beyond owning Collingwood Black and The Black Brisbane (and market event company The Black Market), James is a property developer. The inspiration for Craft’d Grounds came from visiting pocket precincts in other cities in Australia and internationally, and in particular The Grounds of Alexandria in Sydney.

“Also, The Farm Byron Bay,” James says. “That you can put a precinct like that on the edge of Byron Bay, in the middle of nowhere, throw in a bar, throw in a bakery and a Three Blue Ducks restaurant, and just pack the place out — that says a lot about what we want in our communities.”

Albion, of course, isn’t on the edge of town. It’s a thriving inner suburb that’s in the midst of a profound urban renewal. It also acts as a lynchpin between Hamilton and Ascot in the east, Clayfield in the north, Bowen Hills and the Valley in the south, and Wilston and Windsor in the west. James talks up the future of the suburb with domestic tourism and the sudden recent uptick in migration to Brisbane.

“Everything is in such close proximity,” he says. “It’s the prefect precinct and the demographics are right … once the borders open up [permanently], we’ll be dealing with domestic tourism so it’s about making it special for them. People are spending a lot on restaurants. We’re coming out of Covid with a lot of confidence.”

James won’t yet be drawn on the identity of his star tenants, but says the restaurant is being headed up by a well-known Sydney operator who has taken a 10-year lease. Similarly, the operator pegged for the roastery has an “international reputation” and turns over “$50 million in coffee sales a year”.

It’s big and ambitious. But then that’s a good fit for this town, which after a blessed run through 2020 suddenly feels like it’s in the midst of a miniature boom.

“Brisbane has really come of age,” James says. “And there are some new precincts coming online that I think are challenging the old norm. It’s exciting to see.”

Craft’d Grounds is scheduled to open in late May.