You may have seen Lisboa Caffe’s pastéis de nata popping up around town. Now, the one-two punch of flaky puff pastry and blistered baked custard is about to have a permanent home on Hope Street. 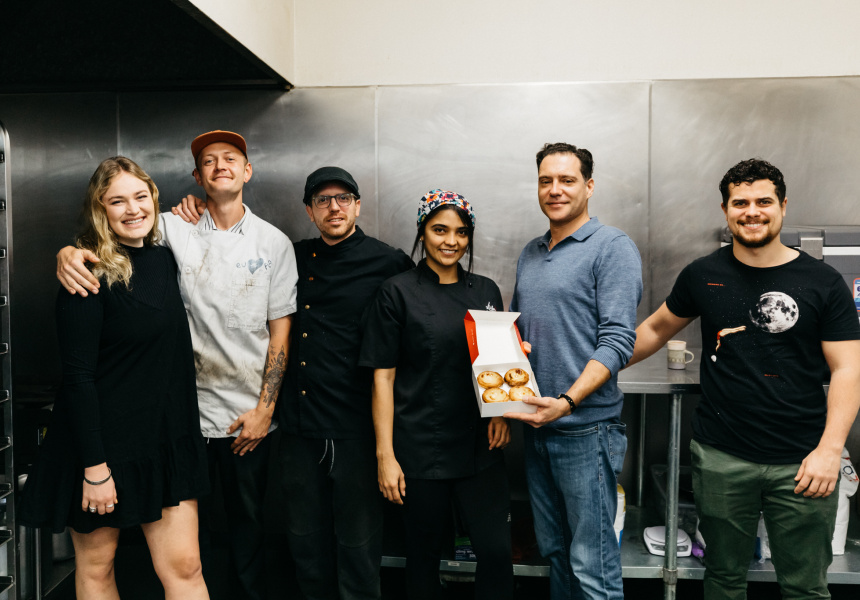 When Joe Rocha started Lisboa Caffe in 2015, the initial plan was to open a cafe (hence the name). But the popularity of his Portuguese tarts took off and he became too busy selling his crispy custard-filled tarts at markets and providing wholesale around town. Finally, his six-year dream will be realised when Lisboa Caffe opens Brisbane’s first dedicated Portuguese tart cafe in late August.

“I come from a finance and accounting background, but I thought this business had an opportunity in Brisbane,” says Rocha, who moved to Australia from Portugal in 2010. “Now it’s time to have a place where we can show people how we make them.”

For those who haven’t experienced a Lisboa Caffe pastéis de nata (Portuguese custard tart) before, the shell is made from a Pepe Saya cultured butter puff pastry. It’s filled with custard and baked in an extremely hot oven (much hotter than what a domestic oven can achieve) to gain a slightly caramelised top with a silky, crème brulee-like filling. Rocha says 10 seconds can decide a great batch and a ruined one.

“It’s a very high temperature bake, so it’s very quick to achieve that caramelisation,” Rocha says. “You have to shut down the oven within a 10-second window, otherwise they are going to burn.”

Rocha began making pastéis de nata at former food incubator turned restaurant and farm-gate Wandering Cooks. In 2017, he upgraded to his own production kitchen in Dutton Park, which he’ll continue to use for the wholesale side of the business. The cafe will churn out small batches of pastéis de nata and other baked goods such as seasonal tarts, breads and other Portuguese desserts. You’ll be able to see the whole process from start to finish.

“I’ll be moulding the tarts half an hour before [you arrive], and when you get there, I’ll put them in the oven,” Rocha says. “Everything will be done right there and then.”

The cafe will go in the former space of Only Specialty Coffee in Hope Street, right next to El Planta (another former Wandering Cooks start-up). The small 30-square-metre space is being fitted out by Aria Property Group, so expect a modern fit-out with Portuguese influences, plus inside and outside seats.

Lisboa Caffe is expected to open at 58 Hope Street in late August.