Taking the beer garden to the next level. Daniel Whiffen and Gerry Murphy enjoy a beer garden. Particularly, an Australian beer garden. “I’m from the UK originally and Gerry is from Ireland, so we are both used to beer gardens and not being able to use them because the weather is rubbish,“ Whiffen says. “Here, we get to enjoy Brisbane’s climate for pretty much the year.”

Little wonder, then, that a beer garden will feature prominently at the pair’s new Milton venue, Cribb Street Social, set to open in mid-September. “With Cribb Street, it’s got a really nice leafy feel,” Whiffen says. “We want to take it to the next step, throw some picnic rugs down, and [serve] big charcuterie boards and shared cocktails under the tree. As if you’re sitting at a park, but you’re actually in a venue.”

Cribb Street Social is another sign of Milton’s recent pivot away from Park Road, and joins a neat cluster of shops that includes Esquire Male Grooming – a long-time local operator that’s moved across the suburb. The recently opened Bessa Coffee and Lat27-designed Link project are also just around the corner.

While the large alfresco area will be Cribb Street Social’s major drawcard, the interior will be decked out with natural wood and copper, and feature leather accents throughout. Just like Whiffen and Murphy’s current CBD venue Mr Edwards Alehouse & Kitchen, charcuterie will be the menu’s focus, but come the evening, larger European-style plates will be offered. The bar will have 10 craft beers and four cocktails on tap, and stock a substantial wine, gin and whisky collection. 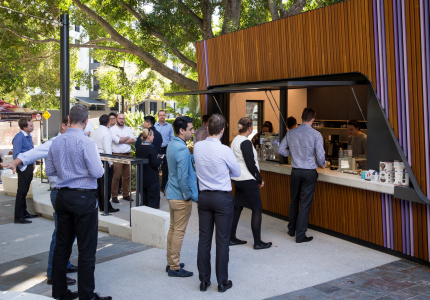