Lune’s first non-pastry venue will have a menu of snacks and small-plates alongside boutique Queensland and Australian wines, and room for just 35 people. Just don’t expect any croissants. 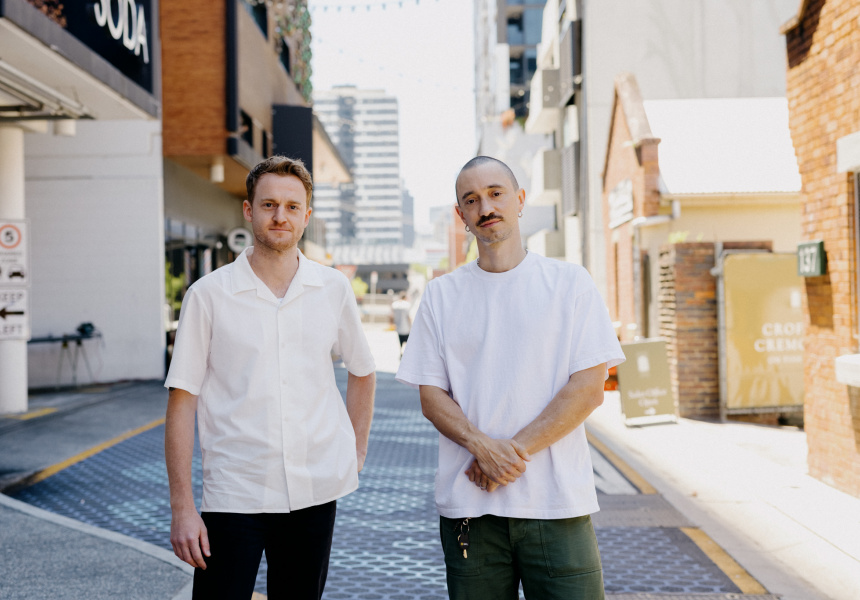 It began with a mistake.

When Lune business partners Kate Reid, her brother Cam Reid and restaurateur Nathan Toleman originally signed a lease with developer Aria for a Brisbane outlet of their world-famous croissanterie, they figured on it being a 380-square-metre shop that would take up the entire ground floor of The Standard residential tower in South Brisbane.

“We sent through what we thought were the finalised plans and they’re like, ‘What’s this? You’ve used 380 square metres. You’re paying for 300-square-metres,” Cam says, laughing. “Ah, fuck!”

A quick redesign sliced a small section from the back of the build, but also created an empty 50-square-metre roadside tenancy next to the finished Lune (which opened in early August).

“Anyone in hospitality who walks past an empty site, their creative juices start flowing,” Cam says. “We looked the space at the front we’d just given back and thought, ‘It’s at the end of Fish Lane where there aren’t many evening options. It has super high ceilings. It’s long and narrow. Someone’s going to do a wine bar here. We should do a wine bar.’”

The result is Butler, which will open on Manning Street next door to Lune in mid-November. It’s a sliver of a spot, with space for just 35 people at a long bar inside and in the circular garden area out front of the building. In terms of design, you can expect something very different to the minimal stone of Lune.

“We wanted it to be warm but have a modern edge to it, so we’ve gone with quite a lot of perforated plywood,” Cam says. “Hogg & Lamb were the architects for Lune but they had one hand tied behind their back because we were so specific about where everything needs to be to maximise croissant production. With this one we said, ‘Here are some of the particulars, but for the rest of it, do your thing.’ We’re letting them create it for us.”

Butler’s wine list will change regularly but you can expect a focus on natural wine, and unusual varietals produced by Australian producers and Queensland producers in particular.

“Butler isn’t for wine snobs and we want to focus on sourcing as close to home as possible,” says longtime Lune manager Ryan Butler, who has lent the new venue his surname. “So if we could represent whatever’s coming out of the Granite Belt, we’ll do that.

“The person who comes in and says, ‘I know nothing about wine.’ That’s the person we’re most excited to have at Butler. We want to make an accessible wine list.”

For food, a small open kitchen will prepare a selection of snacks and small plates designed for grazing, with a couple of larger meals for those who want something more substantial.

“Again, we just want to champion as much Queensland produce as we can,” Butler says. “Also, that ethos of slow food and sustainability around food – the dream for us is that piece of meat that you might be eating that was butchered earlier today is also salumi that you can have in nine months.”

In terms of inspiration, Butler says to envision Leigh Street Wine Room in Adelaide, Sonny in Hobart or Rosella’s on the Gold Coast. What you won’t find, though, is croissants – Lune After Dark, this isn’t.

It might seem a left-field project for Lune, but the team’s collective hospitality experience is broader than many realise. Cam ran bars in Sydney before becoming Kate’s business partner, and Toleman is known for superstar Victorian venues such as Common Ground Project, Liminal and Hazel.

But this is also about being local. Lune started as an Elwood hole-in-the-wall back in the day, and Cam now lives upstairs from the Brisbane store with his young family.

“I want our businesses to be here for years and years and years and years,” Cam says. “We sign long leases. I want to create spaces that become part of the landscape. Whether you go there once a week or once every six months, every time you walk in the door there’s a sense of familiarity.”

Butler will open at 15 Manning Street in mid-December.