The celebrated craft brewer is opening its biggest venue yet, 34 kilometres from the CBD. Trust David Kitchen to open a brewpub in Springfield. The Ballistic Beer Co owner already stuck his neck out in 2016 when he established a brewery and taproom in industrial Salisbury, a suburb better known for its history in munitions manufacturing than craft beer.

That venue went off. And it illustrated the method in Kitchen’s supposed madness. The former accountant, banker and diplomat likes to talk about a good bar or pub being a “third place” – not home and not work, but somewhere you meet others or simply enjoy your own company. Kitchen was one of the first to see an opportunity for brewpubs in Brisbane’s under-serviced sprawling suburbs. Now he’s taking that approach to the extreme with the masterplanned Springfield, 34 kilometres south-west of Brisbane’s CBD (and 21 kilometres east of Ipswich, of which Springfield is technically a suburb).

“We’re trying to take good beer to the people,” Ballistic project manager Wade Curtis says. “What drew us to Springfield was that real need and desire from the locals. There were no real craft beer options, no craft beer bottle shops.

“It’s a huge growth corridor. We’re in a precinct that’s surrounded by a university, a Tafe, a hospital, we’ve got the park grounds right next to us. I think 30,000 residents are within biking distance of the venue.”

This will be Ballistic’s biggest operation yet – a whopping 350-seat brewpub with 18 taps pouring the brewer’s core range alongside experimental runs and guest drops. The venue will also be home to a new 800-litre research and development brewery, which it will use to develop new beers.

Ballistic Springfield will occupy the former site of the Springfield Central Tavern, but this will be a very different venue – no big-brand beers and no televisions (except for special occasions), and more live music and community-minded events. Chef Rhett Allen will adapt what’s worked so well in West End, plating up highly evolved takes on pub-grub classics such as burgers, wings and parmigianas.

“It’s going to be beer food, but the flavours will really pop,” Curtis says. “And where possible we’ll work with local suppliers. We’re 20 minutes from the Scenic Rim and near Lockyer Valley and Ipswich, of course.

Ballistic Springfield is scheduled to open in mid-October. 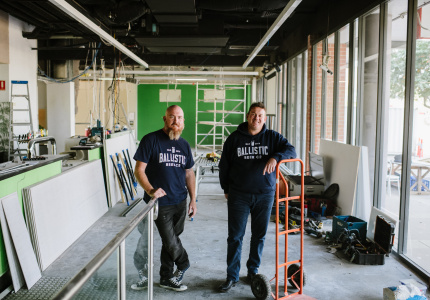