A suburban soul food favourite moves across the river. 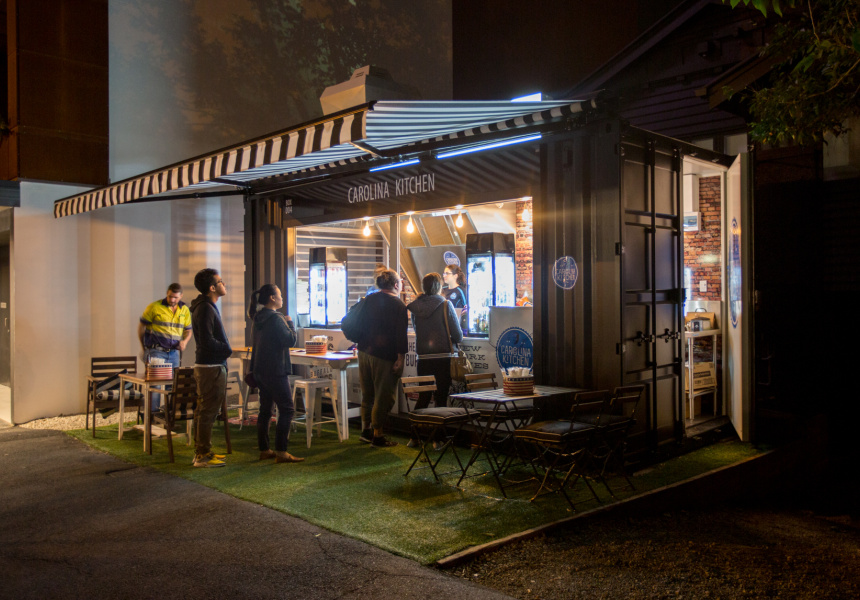 After six and a half years, Carolina Kitchen has moved from a quiet suburban street in Coorparoo where it made a name for itself as one of the best American soul food joints in town. “[It’s] a little bit sad,” says Nigel Perry, who co-owns Carolina Kitchen with his father, Mike, and brother, Isaac. “But [it’s] still exciting because we’ve got more to come.”

The Carolina Kitchen team has re-located to a small, black shipping container on James Street in Fortitude Valley. The space was previously used as an area for food trucks; the Carolina Kitchen van, run by Isaac, was a frequent visitor. “We had always wanted to do more stores and expand on the popularity we have,” Nigel says.

Due to the container’s size, the Perrys have cut the menu down to the favourites: Buffalo wings, cheeseburgers, chilli dogs, fries, potato salad, coleslaw and their house specialty, Aunty Lily Mae’s baby back ribs.

Drinks include popular American sodas, A&W and Dr Pepper. If you’re saving room for dessert, sweet pies such as pumpkin and key lime will appear as weekly specials. There are just a few seats out the front on synthetic grass, so expect to takeaway on busy nights.

As for south of the river, Nigel says to keep an eye on the Carolina Kitchen Facebook page for updates on new locations.