An intimate handmade pasta spot with fresh burrata, truffled mushroom arancini and a trio of pastas from the team behind CJ’s Secret Pasta Club. 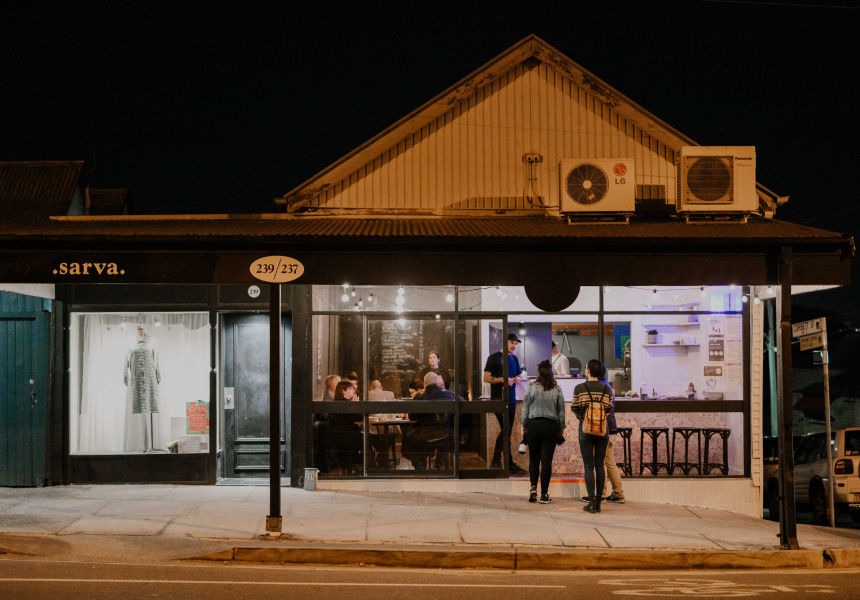 When CJ’s Secret Pasta Club was open, Leila Amirparviz and Darcy Adam found their customers gravitated towards the record player at the end of the night. So much so, some even brought their own vinyl with them.

“[At the start of the night] people are pretty shy about it,” Adam says. “It’s a very personal item.”

“Towards the end of the night, once people have had a couple drinks, they get up, put on a song and have a boogie,” Amirparviz chimes in.

It was a no-brainer then, that the pair moved the record player to Pasta Club, their new venue in West End that opened in July.

CJ’s Secret Pasta Club had a strong following, especially among West End locals. But when the council revoked the venue’s dine-in licence earlier this year, Amirparviz and Adam were forced to turn to takeaway. Shortly after, Covid-19 hit and they decided to close the business entirely, sell the wholesale side of CJ’s Pasta and start looking for a new spot.

The West End locals stumbled upon the old Flora By Greenhouse Canteen space on Boundary Street and enquired a few days later. In just two weeks, they converted the bright and airy space into a dark, moody, retro-inspired room using 30 litres of fresh paint. Even though it’ll eventually seat 40 people (once covid restrictions ease), the space still feels very intimate.

“This is a grown-up, more-refined version [of CJ’s],” Amirparviz says. “Here, [we’re] more creative, flexible, and produce-focused. Yet at the core, it’s still about fresh pasta.”

A concise menu is hand-written by Adam each day and changes depending on the produce available. You can expect to find a number of small dishes to start with, such as fresh burrata, truffled mushroom arancini and house-made focaccia, followed by a few vegetable dishes and a trio of pastas, including pumpkin agnolotti with burnt butter and pine nuts; or fusilli with prawns and red sauce.

It’s BYO vino, which will remain when Amirparviz and Adam gain a liquor license in the future. When they do, expect to find Australian wines made with Italian varietals, and classic cocktails such as Spritzes and a Negroni.

And yes, you can BYO vinyl if you wish.

This story was first published on July 21. Menu items may have changed.