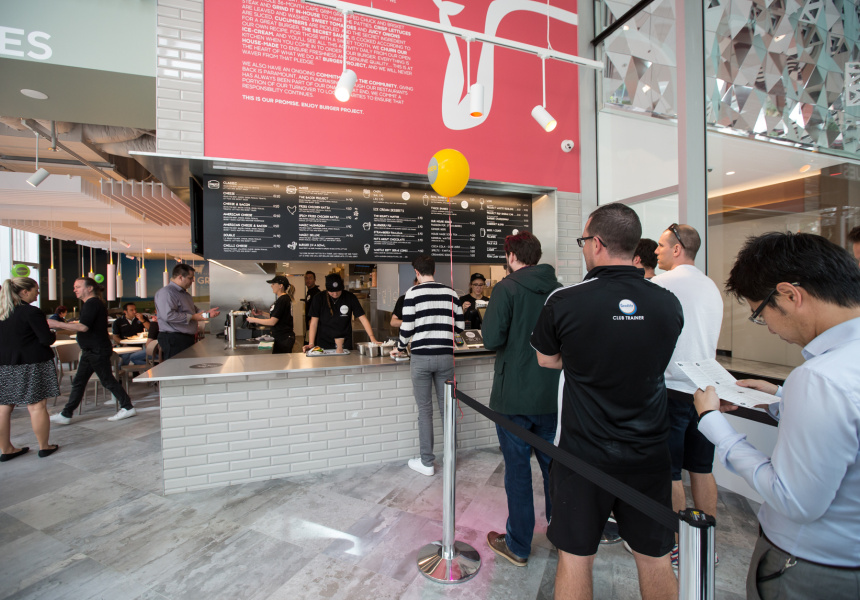 Attention, city slickers. You no longer need to cross the river to get your hands on Neil Perry’s famous burgers.

“It’s going to be nice to have a footprint in the city,” says Perry, whose new store sits on the corner of Edward and Charlotte streets. “There’s a couple of big pubs around so hopefully in the evening people will stumble out and have a burger.

“You have got all the major activity in the mall and so forth, really close to here,” he continues. “You’re a very short walk away from Eagle Street Pier. And it’s [near] what you call the ‘Golden Triangle’ (The CBD’s financial district).”

The new store is Rockpool Dining Group’s twelfth nationwide, its design typical of Burger Project’s neutral colours, broken up with splashes of red. This instalment, though, is considerably larger than the South Bank restaurant, seating up to 134 diners.

The menu consists of nine beef burgers, three chicken burgers and a mushroom option. For the beef burgers, 36-month, grass-fed beef is brought in directly from Cape Grim, and is hand-cut, minced and hand-formed into patties. According to Perry, the most popular menu item is the Cheese & Bacon with beef patty, bacon, cheese, onion, pickles, tomato, lettuce and “secret sauce”. The Fried Chicken Katsu burger is also a big hit – Lilydale chicken matched with coleslaw, pickles, lettuce and katsu sauce.

A number of house-made soft serve ice-creams and shakes are also available, along with a short list of wines, beers (on-tap and in bottle) and a cider.

The Rockpool Dining Group isn’t done yet with Brisbane for 2017. Munich Brauhaus, a large 750-seat German beer hall, is the next big project set for South Bank later in the year. Perry has his fingers crossed it will open just in time for Oktoberfest.