A restaurant in an old timber mill, an underground spot from a former Joy owner and a fancy sushi restaurant from the Hellenika crew – the Brisbane food scene has hardly let up this year. Here’s what you need to tick off. 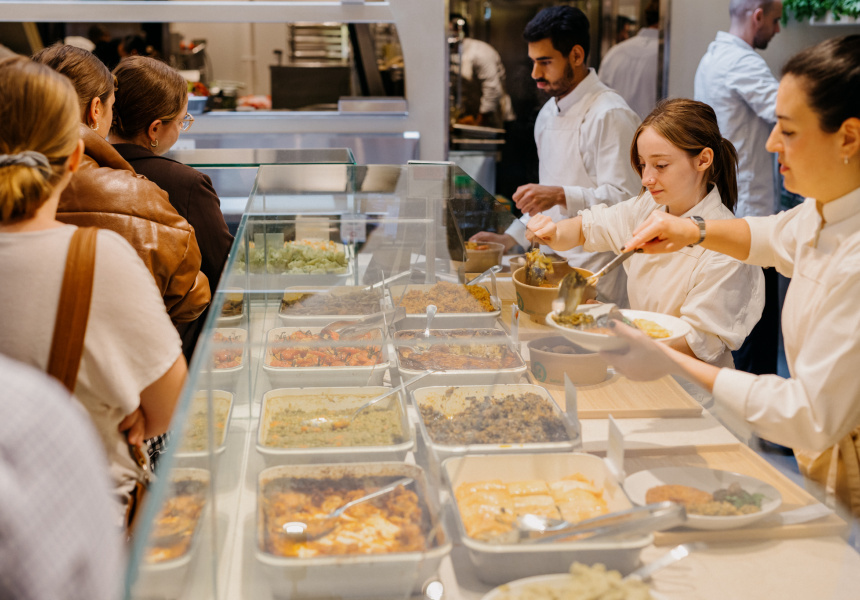 It’s almost the halfway point of 2022 and Brisbane’s restaurant scene shows little sign of slowing down as we continue to climb our way out of the pandemic. There’s a stack of openings still to come later this year, but here’s what to check out now, from a restaurant with Michelin-star pedigree by a Kiwi menswear label and a new location and identity for a late-night Valley favourite, to the long-awaited return of one of the city’s remaining true fine diners.

Bacchus, South Brisbane
Bacchus opened its doors in May for the first time since the March 2020 shutdown of food and drink venues forced it to close to the public (it has spent much of the past two years operating as part of Rydges South Bank’s involvement in the government’s quarantine program for returning international travellers). It’s been a welcome return for one of the city’s true fine diners, but this is a slightly different Bacchus. Executive chef Massimo Speroni has departed, replaced by Matthew Wood, former head chef at Stokehouse, senior sous-chef at Aria Brisbane and most recently executive chef at Hilton Brisbane. Taking over as chef de cuisine is Isaia Dal Fiume, a long-time Speroni lieutenant who, like his former boss, began his career at the two Michelin-starred San Domenico in Italy. Dal Fiume’s Italian-inflected menu includes mushroom with smoked burrata and mushroom broth, Longreach kangaroo tartare with beetroot and camel cheese, and Brisbane Valley quail with pumpkin seeds and lime. Bacchus’s extravagant desserts, degustation menus (one of which is vegan) and high teas have also returned. Wines are drawn from a 600-bottle list that features 47 drops by the glass. The fit-out has evolved too, with new furniture, fittings and a colour palette that features deep mahogany, tobacco and teal.

Clarence, Woolloongabba
Part of a new wave of smaller restaurants that’s emerging across Brisbane, Clarence opened in February in the heritage-listed former digs of Vespa Pizza near the corner of Stanley Street and Annerley Road. Behind the 35-seater are Ben McShane and Franklin Heaney, who between them have worked at Nineteen at The Star (where they met), Stokehouse Q, Kiyomi, The Fish House, Momofuku New York and Umu in London. On a seasonal menu, chef McShane is giving his vegetables just as much shine as his protein. You might eat green beans with white peach, almond and marjoram; asparagus with clams, bourride and espelette pepper; or pig-head terrine served with peas, grapefruit and ginger. That lighter touch is complemented by Heaney’s Australian drinks list that focuses on smaller wine producers such as Express Winemakers and Future Perfect, alongside boutique local spirits. The space itself is little changed from its Vespa days, with the timber banquette, raw brick walls and pendant lights all present and correct (although the booths have been pulled out and replaced by tables). The unfussy treatment gives the restaurant the feeling of dining in someone’s home.

Exhibition, CBD
From former Joy co-owner Tim Scott comes this ambitious 24-seat CBD restaurant (and 10-seat bar) in a moody underground tenancy at the old Metro Arts building on Edward Street. Materials throughout are a mix of heritage and modern textures, with original exposed bricks and enormous 900-millimetre-thick timber beams the standout features. There’s no à la carte here. Instead, two set menus continually evolve depending on what’s in season and available from local farmers and specialist suppliers. Early dishes have included a scampi sashimi churro; roasted duck breast with beetroot and a balsamic sauce; and Wagyu cap grilled over coals and served with sweet-and-sour sherry, mustard and pickled spring bulbs. Otherwise, Exhibition is not only dedicated to food and beverage, but also art, artisans, makers and producers. The cutlery has been hand-forged by Kinnow Cutlery, and there are sake sets by Box & Ho Pottery and vases by Brighenti Design Studio. In the main dining room there’s a set of antique Japanese knives on display, and shelves of fancy recipe and restaurant books.

Herve’s Restaurant & Bar, Albion
Former Howard Smith Wharves food and beverage director Hervé Dudognon’s 80-seat French-inspired restaurant and bar opened in May, tucked away at the back end of Albion’s Craft’d Grounds food and beverage precinct. It’s a stunner, taking the industrial bones of its 100-year-old timber mill premises and creating an inviting space of terrazzo bars and countertops, textured walls, original wooden floors and handsome banquette seating. The restaurant is defined by a fabulous open kitchen where the husband-and-wife team of Chris and Alex Norman, executive chef and executive pastry chef respectively, work at a low-set counter, helping them engage with the dining room. The Normans’ menu is relatively tight, and its high-fidelity focus on local produce leads it towards Queensland’s coast. There’s crab caught by Fraser Isle Spanner Crabs and served with rock melon, pomelo and jamon; Mooloolaba tuna loin with a tomato consommé and jus de cacao; and coal-grilled Moreton Bay bug finished with a mornay foam and piment d’espelette (a rare variety of chilli). For drinks, there’s a 150-bottle wine list that features smaller winemakers from all over the world, with a page dedicated to Corsican wines imported by Dudognon.

The Lodge bar & Dining, Fortitude Valley
Kiwi menswear brand Rodd & Gunn opens a restaurant on James Street. Read it again and it begins to make sense: James Street is where retail meets food and beverage. The Lodge looks to bring it all under one roof: the restaurant’s heritage-listed Lawless Grocery Store building connected to a new Rodd & Gunn boutique on the James Street side of the premises. Overseeing the kitchen, Kiwi executive chef Matt Lambert flexes his Michelin-star muscle (eight years running at The Musket Room in New York) via local produce and neat combinations of flavours and textures. Dishes include a salad of warm and cooled peas with fried enoki and oyster mushrooms; cuttlefish with chilli, rosemary and aioli; blue-crab fettuccine with sea-urchin butter, bottarga, lemon and chives; and a dry-aged, bone-in New York strip steak cooked on embers and finished with a seeded mustard jus. Accompanying the food is a 250-bottle wine list compiled by Cameron Douglas, New Zealand’s only master sommelier. The venue itself plays it relatively straight with reams of pale American oak on the floors and ceilings, brass highlights, table linen and flagstone walls.

Mina Italian, Bulimba
Valley Favourite Eterna has been transformed into this bright and lively Italian restaurant on Bulimba’s Oxford Street next door to Darvella, Melrose and Bellissimo. Mina is decked out in bright yellows and whites, with VJ wall features and a pink terrazzo bar. A low-set pass keeps the kitchen open to the restaurant and many of its 80 seats are outside under festoon lighting. The food, by chef Joel Walker (previously of The Calile), ranges more widely than Eterna’s Roman-based menu. You might have porchetta with fennel apple crisps and a sauce vierge inspired by Rome; Florence-style plates of rigatoni and Tasmanian lamb ragu with tomato sugo and ricotta salata, and polenta a tavola with buffalo mozzarella, marrow, sugo and vegetables; or local split-grill prawns with yellow-tomato bruschetta that captures the spirit of the Mediterranean coast. There’s also a Valoriani woodfired oven punching out Napoli-style pizza. The 90-bottle wine list has been mostly imported from Eterna and retains its focus on Italy’s peninsula and island regions, with your typical pinot grigios and soaves flanked by Venetian vermentino, Sicilian nero d’Avola and Umbrian trebbiano Spoletino. Mina, though, has also added a slug of funky local drops, including an Alpha Box & Dice gruner veltliner and Unico Zelo’s cult Esoterico amber blend.

Popolo, South Brisbane
A reinvention done right, Popolo reopened earlier this month after an extensive refurbishment of its South Bank premises. About the only thing the same is the open-air layout and the cracking views across the river towards the city. Gone is the themed fit-out with its red neon and wall art, replaced by a much more understated treatment of terracotta tiles, arched mirrors and a parquet floor imported second-hand from a heritage shopping centre in France. The food has been refined too. Catching the eye among the small plates are produce-led dishes such as braised baby octopus with red wine, Ligurian olives and lemon mascarpone, and truffled burrata with olive oil and toasted bread, while new mains include cappellacci filled with buffalo mozzarella and burnt butter in a pumpkin puree with pancetta and toasted almonds, and conchiglie (shell pasta) with pork and fennel sausage and spicy cime di rapa (broccoli rabe). For drinks, there’s a mix of imported Italian and local craft beers, a jazzed-up cocktail list that includes a Negroni of the week, and a 75-bottle wine list that prioritises drops sourced from across the Italian peninsula.

Sunshine, Fortitude Valley
After a couple of months of delays, Sunshine finally opened in April in the James Street premises formerly occupied by Chow House. Co-owner Simon Gloftis will cheerily describe this al fresco spot as “vegetarian takeaway”, but that sells short its terrific fit-out. There’s the sea of bright yellow umbrellas that spreads its way down the pavement; an immaculate internal treatment of archways, timber, brass and rendered off-white walls; crazy-paver tiling; and seating for 90 people at fetching timber-top tables with wire-frame chairs and a line of neat booths. Order at the counter and fill your plate with any combination of up to 35 Mediterranean-inspired dishes (many of them vegan), ranging from juicy stuffed tomatoes and bean salads to baked spinach rice, spanakopita and orzo pasta. Weigh it by the 100 grams, and then sit and enjoy something from the 30-strong list of local and vegan-leaning wines, or a spritz or beer.

Sushi Room, Fortitude Valley
Sushi Room is not some neighbourhood izakaya, but arguably 2022’s buzziest opening. From Simon Gloftis and business partners Kelvin Andrews and Theo Kampolis (who, together, form STK Group, which runs Hellenika, SK Steak & Oyster and Sunshine) comes this Richards & Spence-designed restaurant inspired by 1960s neo-futurism. Downstairs, the 60-seater is fitted out with stone-top tables, grey upholstered booths and vertical blinds. Pride of place is a 9.3-metre solid Hinoki timber counter imported from Japan, while a textured domed ceiling provides a peek into an upstairs private dining room, painted bright red. Slotted into the ground floor of The Calile Hotel on James Street, the restaurant sits behind a single nondescript door found between the hotel lobby and a stairwell down to the car park. On the menu is kingfish, grouper and alfonsino nigiri and sashimi; vinegar-mackerel and bug-tempura sushi rolls; tempura lobster; toothfish and Wagyu yakimono; and Oscietra Sturia caviar. The drinks list features 20 sakes, a clutch of shochus and umeshus, and 25 whiskies. An internationally roaming wine list tops out at a handy rather than hair-raising 160 bottles, but you can also go deep from the neighbouring Hellenika and SK Steak & Oyster cellar lists, if you please.