Despite a difficult year, the city’s cafe scene has managed to raise the bar yet again. There’s a Colombian coffee specialist, a bright-pink croissanterie, a handsome all-day bistro, and a fancy kiosk in a beautiful urban park. 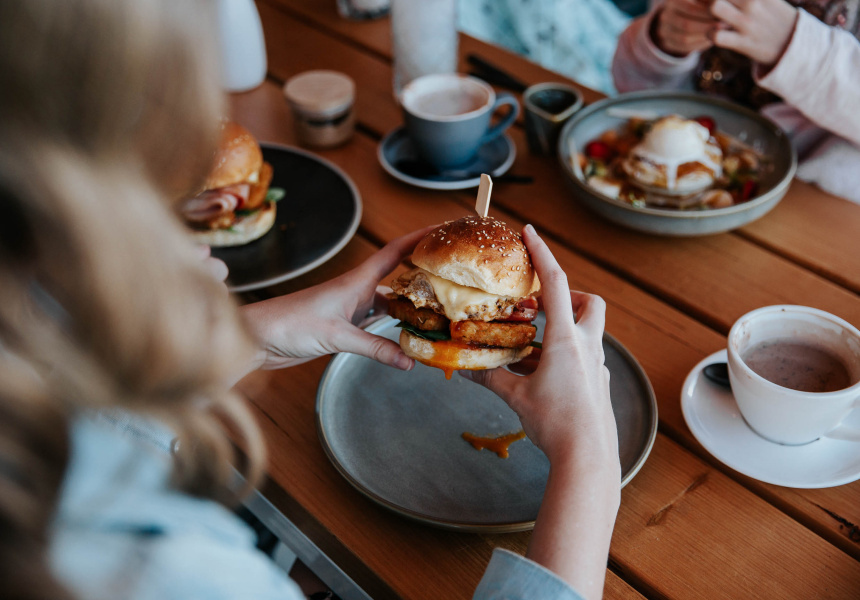 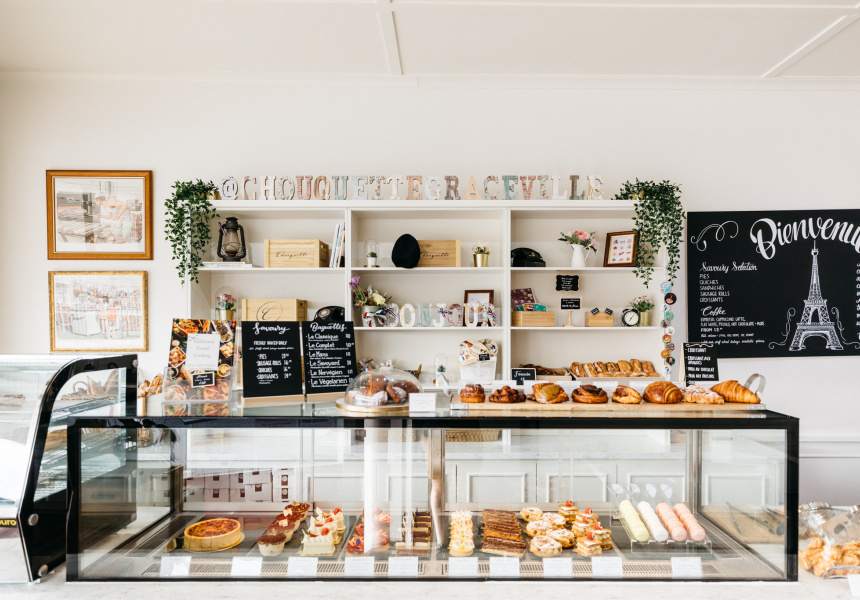 If covid taught us one thing this year, it’s that you can’t get in the way of Brisbanites and their coffee. Despite the pandemic, we saw a number of terrific cafe openings this year. From a Colombian coffee specialist to a bright pink croissanterie and a fancy kiosk in a beautiful urban park, here are the best of them.

Kiki
Earlier this month, the team behind Rick Shores and Little Valley (now-closed) opened a fancy kiosk in a beautiful Richards and Spence-designed urban park. Kiki deals in Bellissimo coffee, Doughluxe doughnuts and Chouquette pastries in the morning; natural wine, cocktails and Asian beers in the afternoon; and banh mi all day. For the latter, there’s a vegetarian baguette and a breakfast baguette with Laos sausage, egg and Vietnamese salad. The venue itself isn’t much more than a large circular kiosk parked in the corner of the Town Square precinct, between Fish Lane and Melbourne Street. What was once an empty, unused space has been converted into a vivid urban garden of red brick, timber and tree ferns.

Anytime
Tom Cooney believes there aren’t enough cafes in Brisbane’s CBD that are both high-quality and fun. That was the goal for Anytime, which he co-owns with Jack Wakefield and football player Scott Neville. Finding the hidden coffee shop is where the fun begins – there are two ways to get there. You can walk down a Mary Street laneway or enter through the back of men’s clothing store Urbbana, which fronts onto Edward Street. Whichever way you arrive, you’ll notice the venue is small – very small – with a tiny deck and a cosy white-walled room. Coffee Supreme’s Five Star Day is the house blend and baked goods come from Salisbury’s Sprout Artisan Bakery.

Mica
Shannon and Clare Kellam (Montrachet, King Street Bakery) opened all-day bistro, Mica, inside the brand new Breakfast Creek Lifestyle Precinct in April. For breakfast, there’s pastis-and-citrus-cured Ora King salmon with whipped fromage blanc, a poached free-range egg, dill and sourdough; and a dish playfully named “Like Eggs Benedict, But Better” that features red-gum-smoked pork jowl, a toasted muffin, a free-range egg, and chardonnay-vinegar hollandaise. The food is helped down by Vittoria coffee, a selection of cold drinks and a wine list evenly split between French and Australian drops. The venue itself is a looker; a handsome green awning welcomes punters into a space detailed with brick, marble and ribbed glass.

The Maillard Project
Adam Wang, the man behind Coffee Anthology, opened The Maillard Project in the CBD. It’s a place where you not only drink, but learn about coffee – how to roast it, how to brew it and how to serve it. Coffee enthusiasts can try their hand at roasting, practice on a third espresso machine or come in for cupping sessions. Still, The Maillard Project remains first and foremost a terrific coffee spot and classy cafe. It pours four espresso options and three filter options daily, all of them using coffee that’s roasted in-house. For food, there’s a potato rosti served with pork-and-fennel sausage, pickled radish and zucchini, and a pork-stock congee. Designed by West End’s Clui Design, it’s a slick, lab-like space built from pale timber, stone and glass.

Cafetal
To create a coffee blend entirely from Colombian coffee beans. Cafetal owes its existence to this simple pursuit. Owner Andres Rodriguez utilises close connections with farmers in his native Colombia to stock an eye-catching roastery on East Brisbane’s Overend Street, the former warehouse home of a stainless-steel manufacturer. Rodriguez knocked out a couple of offices, installed some plumbing and turned a front windowed area into a coffee bar. It’s very much angled towards grab-and-go, but there’s also a cosy seating area among the sacks of beans if you want to stick around. At the bar, espresso, V60 and cold brew are all available. Cafetal’s go-to blend, Overend, incorporates beans from two different farms in Colombia’s Santander and Huila regions.

Superthing
Superthing is a croissanterie, bakery and cafe in one by Eddy Tice and Ania Kutek. There’s croissants – béchamel-cheese and ham croissants, chocolate and hazelnut croissants, tiramisu twice-baked croissants – as well as almond danishes, zesty bitter-orange custard cruffins and vanilla custard morning buns. The treats are washed down with Padre coffee and a short selection of smoothies and other cold drinks. In May, head chef Andrew Cameron introduced a breakfast and lunch menu featuring poke-style toast with house-cured salmon, avocado, edamame and soy egg, and braised beef cheeks with truffle creamed polenta and heirloom carrots. The shop’s Montague Road space is a looker. The walls are pink. The leather booths are pink. Even the ceiling, with its snaking, exposed air conditioning, is pink.

Plentiful
This beautiful cafe on Park Terrace is testament to the power of good branding. Owners Kiara Naidoo and George de Bhal left the bones of the space (previously Park 7, an American-style diner) largely intact. But with the help of a local interior design firm, they’ve managed to completely transform its look and feel with an understated colour scheme of cream, turquoise and grey. In the kitchen, the menu elevates your standard Australian brunch with flashes of chef Dan Choi’s Korean heritage. There’s spicy grilled pork served with free-range eggs and a potato rosti; a pork belly salad; and Korean-style fried chicken with rice cakes and pickled daikon. Coffee is a Five Senses blend and rotating single origin for espresso, plus a daily filter brew.

Chouquette Graceville
When Chouquette first opened in Graceville, owners Fabrice and Meggy Delaunay were selling out of baked goods by 10am. Fabrice credited their popularity to the area’s need for an artisan bakery (before Chouquette opened, Honour Avenue only had a Bakers Delight). Formerly home to salad shop Greens and Grains, the Delaunays knocked down a wall to extend a marble benchtop and decorated it with Chouquette-engraved wooden boxes and framed pictures. Still, the focus is squarely on the traditional French baked goods. The selection includes croissants, danishes and tarts, as well as specialty items such as brioche loaves, canelés, and of course, chouquettes (choux pastry puffs sprinkled with pearl sugar). There are also baguettes and sourdough loaves (including a pumpkin one). Pair your pastry with a coffee made with Industry Beans’ Newstead Blend (a mix of Ethiopian and Brazilian beans).

Moonshine
One of Byron’s most celebrated roasters comes to the big smoke with a cute kiosk under a towering fig tree. 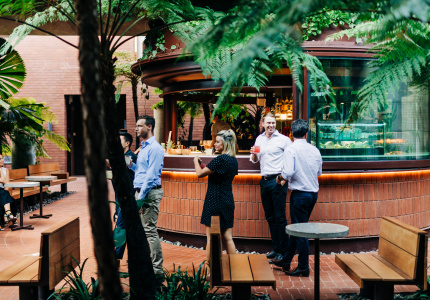 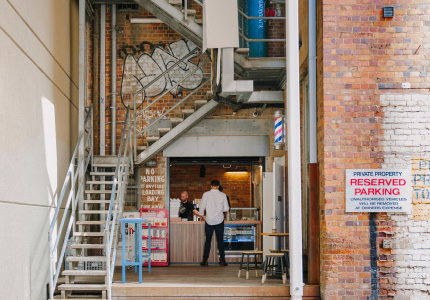 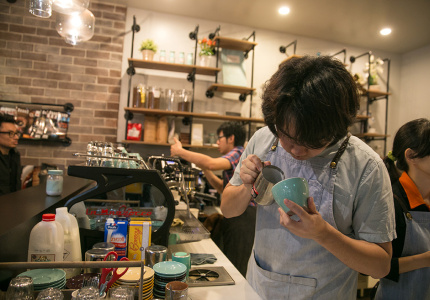 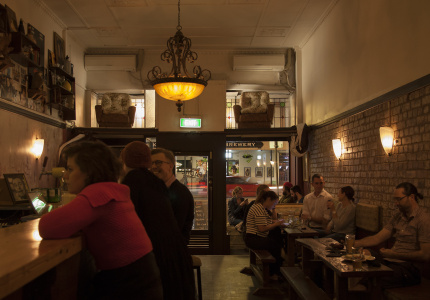 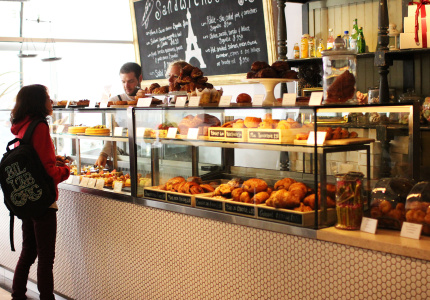