After a relatively quiet 2020 for new boozers, they’ve come back with a vengeance – from a bright rooftop bar with a cocktail list designed by one of the world’s best bars to a neighbourhood wine den from two coffee professionals. 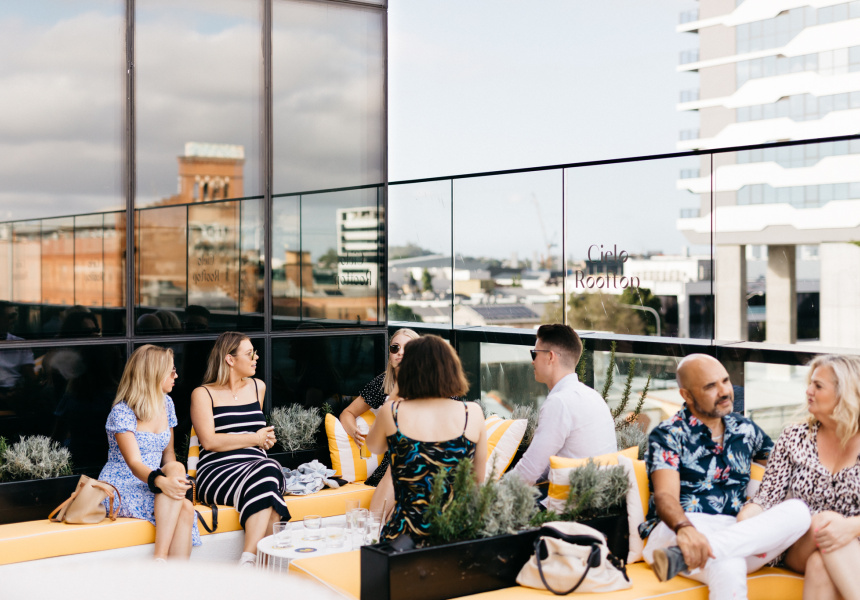 With Brisbane’s climate, it’s warm enough all year round to visit rooftop bars, bask in the sun and enjoy their magical vistas. Perhaps that’s why we’ve seen a bunch of new rooftop bars open in Brisbane over the past few years, including two stunning additions this year. In 2021, we’ve also welcomed an exciting new wine bar peddling natural drops and alternative varieties, and a new riverside location from an urban winery. Here’s where you need to tick off.

Cielo Rooftop Bar
Stefano de Blasi and Edoardo Perlo, the duo behind Salt Meats Cheese and Eterna, have teamed up with Sydney’s Maybe Sammy – which rated 11th best in the 2020 World’s 50 Best Bars list – to open Cielo Rooftop Bar and The Parlour (formerly La Costa Bar). In the space previously home to Altitude Rooftop Bar, Cielo has been given a bright treatment with wicker furniture and colourful booth seating. What hasn’t changed are the splendid views across the Valley to the north and east and the CBD to the south. Seafood features heavily on the menu, with options like octopus carpaccio and kingfish ceviche. Cocktails include the Azzurro, with Tanqueray gin, grappa moscato, citrus, Marionette blue curaçao and orgeat syrup. Downstairs, The Parlour – inspired by the Gulf of La Spezia along the Ligurian coast – is shaking cocktails with a touch of theatre in glamorous retro surrounds.

La Valle
De Blasi and Perlo quickly followed Cielo Rooftop Bar with La Valle, an Italian-influenced wine bar that opened in the poky former digs of Valley Wine Bar in January. La Valle’s wine cellar holds anywhere between 140 and 200 bottles of mostly smaller Italian and Australian producers, but there are also wines from California, France and South America. It’s keenly priced too. Many bottles on the house list are under the $50 mark, and wines by the glass are typically priced between $10 and $12. For food, there’s house-made foccacia with porchetta, charcuterie, cheese boards, olives and tinned seafood. The venue itself takes the dark, moody bones of Valley Wine Bar and lends them a splash of colour. Outside, foldable chairs, tables and umbrellas give La Valle the feel of a summer Italian kiosk.

City Winery Eagle Street
City Winery opened its third venue (or fourth, if you count Carl’s in Newstead) in an 80-seat, open-air space previously occupied by Nagomi Bento. Designer Billy Dawson has completely transformed the space into a warmly detailed brick, timber and glass creation with plenty of greenery. The back wall is lined with bottles of City Winery’s in-house label, Gerler Wines. For food, group chef Travis Crane’s menu includes plates of oysters, hot-smoked market fish, a carrot “dagwood dog” with carrot ketchup, and grass-fed-beef short ribs. Still, it’s the wines – produced up the road in Fortitude Valley using grapes sourced from across the country – that are the main event. Co-owner and winemaker Dave Cush tends to avoid the Australian blockbusters in favour of alternative varieties (viognier, fiano, nero d’Avola, nebbiolo and tempranillo) that are perfectly suited to the Queensland climate.

Iris
Compared to a few years ago, there are now so many rooftop bars in Brisbane that it takes something special to cut through the noise. Enter Iris, The Ghanem Group’s rooftop bar and 200-seat restaurant that opened atop the brand new Hotel X in the Valley (they also opened French bistro Bisou Bisou on the ground floor). Iris’s open-air outlook is one of a kind, the apartment blocks of the Valley giving way to the Story Bridge, which crosses in front of the stacked high-rises of the CBD. It’s eye-catching inside, too. Design studio Space Cubed took inspiration from the Mediterranean with stone and tiled walls, rich fabrics, olive trees and hanging wisteria. For food, expect a mix of tapas, flatbreads and bigger share plates. Drinks include a classic-leaning cocktail list, a sangria menu, and a tight 80-bottle wine list that mixes Australian drops with vino from Spain, France, Italy and Greece.

Noir
Eli Rami and Sam Holman (both of Blackout Paddington) have mastered the art of coffee; now they’re venturing into the world of wine with their new Paddington bar, Noir. They’ve converted a three-storey former clothing store into a modern, airy stunner with exposed white-brick walls, intricate cornicing, a tiled bar and timber panelling. The by-the-glass list includes a rotating classics (like Barossa shiraz and Provence rosé), alongside natural drops and alternative varieties, such as a Picpoul de Pinet from the Languedoc and a Ravensworth sangiovese. Outside of that, the 450-bottle underground cellar is filled with rare burgundies, barolos and cult Australian wines. Rami and Holman worked closely with Fino Foods and Saison Salumi to develop a simple offering of nibbles, cheese and charcuterie. Think Olasagasti anchovies with toasted sourdough; squid ink and truffle salumi with guindilla peppers; and grilled buffalo haloumi with quince and fresh honeycomb.

Inchcolm Bar & Bistro – The old Salon de Co at the The Inchcolm by Ovolo has been transformed into an old-world Los Angeles-inspired bar and bistro dishing up escargot, Moreton Bay bug spaghetti and a $12 Martini hour. 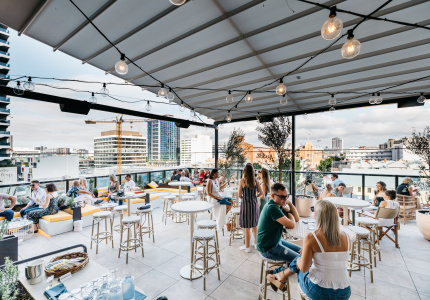