Sip, shuck, slurp
La Costa Restaurant’s new sister venue and neighbour The Parlour (previously La Costa Bar) has launched Sip Shuck Sip Thursdays. Every week from 5pm to 7pm during June and July, you can snack on $1 oysters and sip $12 cocktails and $5 house wines and beers. The menu revolves around Bombay Sapphire gin: cocktails include The Parlour Bombay Martini and a Sapphire Spritz, while the oysters come dressed in either a Bombay raspberry gimlet mignonette or a Bombay fizz vinaigrette. Book a spot online.

Shawarma Sundays
Gerard’s Bar is sending off the weekend with its new Shawarma Party Sundays. The Middle Eastern mezze and cocktail bar will have a weekly rotating shawarma by chef Adam Wolfers served with sumac-spiced chips and tahini mayo from 2pm till late. The wraps will be filled with combinations such as brisket, muhammara and pickled chilli; falafel, cabbage and garlic yoghurt; harissa pork neck with cabbage and labne; and more. The shawarma special will set you back $20 – pair it with one of the bar’s signature Levantine-inspired drinks. Book online.

All hail the ale
The Great Australiasian Beer Spec-tap-ular (GABS) festival returns this weekend for a day of tastings, live performances, street food, giant jenga, a silent disco and more. The event has rustled up more than 110 craft producers from across Australia and New Zealand (including Ballistic Beer Co, Little Creatures, Modus Operandi, Moon Dog and Slipstream) with 120-plus exclusive “festival brews” for punters to try on the day. Beer and cider might be the stars, but there’s also a supporting line-up of wine, whisky and other spirits. Plus, snacks by a selection of food trucks and market vendors. More information here.

Seasonality in South Bank
Grazed and Grown, the first of three main events for this year’s Regional Flavours at South Bank kicks off on Friday June 18. Running until Sunday June 20, the stacked line-up features a 40 stall-strong marketplace of local producers (all from within 120km of the CBD) and cooking demonstrations from heavyweights Alanna Sapwell, Louis Tikaram and Matt Moran. Round table talks and meet the maker sessions will focus heavily on sustainability and seasonal produce with input from industry leaders including OzHarvest and Stone and Wood. Tickets are available online.

Music on the road
There’s still time to book some leave in and head out on the road for the inaugural state-wide Queensland Music Trails. Run by the team behind QMF (formerly Queensland Music Festival), its billed as a “music festival meets road trip” and will encompass a unique set of live music across the outback from June 26 to July 8. A bid to get city dwellers out of the big smoke and into the country, it begins with opera in Jimbour before a stargazing concert in Charleville and performances in Quilpie (featuring theatremakers Dead Puppet Society, Windorah and finally Birdsville. The full program and tickets are online. 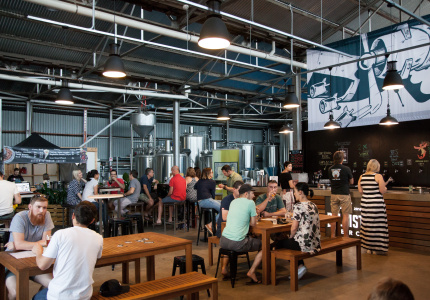